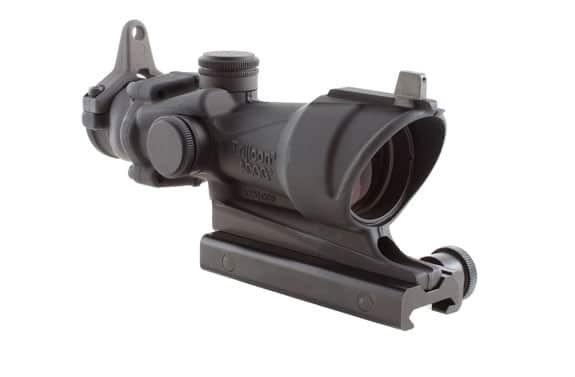 Try to explain to a new customer how to use iron sights — whether on a handgun or a rifle, it can be a little difficult. And then when you tell them they should focus on the front sight and let the rear sight and the target go to a blur, they often look at you like you’re crazy.

They are trying to hit the target, and to do that they need to see it, right? Many shooters struggle with the problem of front sight focus. After all, the natural tendency is to focus on the object you want to shoot. And that’s especially so if the target is a charging dangerous animal that wants to eat you for dinner or a two-legged assailant who wants to kill you.

Telescopic sights have their drawbacks, too. These become obvious when one tries to shoot a moving target, particularly if the target is at close range where keeping it in the field of view is not easy. And if the target is far away, even if it isn’t moving, it can be hard to find in the scope.

The red-dot solution benefits shooters both new and experienced, especially those who have difficulty focusing on objects that are close or those who have trouble changing focus quickly. The solution also makes it a lot easier to train a new shooter — they just learn faster, because getting a sight picture is a lot less complicated. Special operations forces solved the problem years ago and use red-dot sights on a regular basis.

They’re labeled red-dot sights because so many of them have a red dot for the aiming point or reticle. But there are really two different kinds — some will say there are three, but we’ll just concentrate on the holographic and the reflex types. You don’t really need to know the difference in order to sell them, but it is interesting.

The reflex sight projects a laser-powered dot onto the back of a lens through which the shooter views the target. The lens is tinted just enough that the shooter can see the dot on it while still seeing through the lens and viewing the target. The holographic sight has a holographic recording or image of the reticle or dot actually placed inside the glass window that is then illuminated by a laser inside the sight.

The Essence Of Speed

Because the dot looks like it is actually on the target, the eye can focus on the target and still clearly see the dot. When the eye identifies the target, it at the same time sees the red dot. That is much faster and saves precious time in a stressful situation.

That one feature is at the core of all the benefits offered by a red-dot sight — but there are other key advantages.

For example, since most red-dot sights do not magnify the target, it is much easier to keep both eyes open while aiming. And that in turn increases peripheral vision. Try closing your left eye and then see what is happening on your left side without turning your head. You can’t do it because your nose is in the way of your right eye. But with your left eye open, you can see things on your left side while looking straight ahead.

Yes, you might not be able to make out detail on the object to your left, but you can still see it and detect movement. That helps situational awareness, which is very important in self defense or hunting.

Keeping both eyes open while shooting is especially useful when shooting at a moving target. With a magnified optic, particularly those with high magnification, keeping the target in the field of view through the scope can be tough. But since most red-dot sights are typically not magnified and the shooter can keep both eyes open, it becomes much easier. The field of view through the red dot is greater than with a magnified optic, and the other eye can also see the target.

All you have to do is follow the target with your nose while tracking it with the gun, and you can stay on target. And eye relief isn’t important with a red-dot like it is with a magnified scope. Red-dots have unlimited eye relief, which means they can be placed at about any distance from the eye and still work. And placing the red-dot a little further out front also aids in maintaining a clear field of view, because the housing of the red-dot will not hide a portion of the shooter’s view like a much closer scope tube will.

Closely tied to the concept of shooting with both eyes open is the occluded optic effect.

Let’s say that the front lens or window of the red-dot is covered, or occluded, by dirt, snow or debris. In a worst-case situation, it could be blood that keeps you from seeing through the sight. Guess what? You can still use the sight to shoot, because with both eyes open and one eye looking through the sight while the other looks at the target, the dot will appear to be on the target.

It’s not magic; it’s your brain superimposing the dot on the target. This works for about 80 percent of shooters with the other 20 percent having some difficulty getting used to it. But with practice, most people can do it.

Let’s also not forget that red-dots work better in low light than iron sights do. That’s because they are illuminated either by tritium, battery power or a fiber-optic that gathers available light. Some are lighted by a combination.

Some Aimpoint, EOTech and Lucid Optics sights also have brightness settings for use with night-vision equipment. And the days when batteries lasted only a few hours are long gone. Some sights like those from Aimpoint will stay on for five or more years of continuous use — just leave the sight on and forget about it. It’s always on and ready to use at a moment’s notice.

Of course, some won’t trust an electronic device and insist on iron sights or a scope. Well, those who think scopes or iron sights never fail just haven’t shot enough. Besides, the currently produced red-dot sights can withstand a lot of abuse and keep running while holding zero.

I’ve seen sights from Aimpoint and EOTech be dropped and intentionally thrown around the range, then get remounted on the gun and still work with no loss of zero. Quality mounts like the ones provided by the original manufacturers or from makers like LaRue Tactical or GG&G can be removed and replaced many times without losing zero. For those still worried about the red-dot failing, retailers can offer a set of backup iron sights.

Once the gun is zeroed and the iron sights and red-dot are co-witnessed, they can be used together as a reference. As long as both point to the same spot when viewed through the red dot sight, you know that the gun has maintained zero. If they don’t, it’s a clue that something is wrong and needs to be checked.

Some customers might say that red-dot sights are good only at close range, but that’s also not true. Sure, if the dot is a large one that covers, say, five minutes of angle, the shooter will have a harder time making a precision shot at longer ranges. But by selecting a red-dot with a smaller reticle — say one or two MOA — a longer shot is not at all difficult as long as the target isn’t so small the dot obscures it.

For example, the vital zone on a deer is about 8 inches in diameter. Since one MOA is 1 inch at 100 yards and 2 inches at 200 yards, a 1-inch dot will cover 1 or 2 inches of the deer at those ranges. Now a deer is a lot larger than 2 inches, and if all you need to do is place the shot anywhere in the 8-inch vital zone, just put the dot in the middle of it and press the trigger. If your customers really need more range, there are plenty of magnifiers available that can be mounted just behind the red-dot sight.

Even though the red-dot can be zeroed on a rifle for 100, 200 or even 300 yards, many shooters will want to use the gun at close range. So the shooter has to be aware of the mechanical offset, which is the distance of the center of the sight above the boreline. For the typical AR-style long gun, the offset is about 2.6 inches, so if the shooter is aiming at a target that is 5 yards away, the bullet will strike about 2.6 inches low.

The solution is to train to aim at the proper point, about 2.6 inches high at closer ranges, in order to place the bullet where intended. That’s the way people who carry these guns for real and go to interesting places to do interesting things do it. A little knowledge of exterior ballistics, which is beyond the scope of this article, is needed to fully understand the flight of the bullet — but your buyer needs to be made aware of this characteristic.

Red-dots offer a lot of advantages for new and experienced shooters, whether they are young or old. It’s a large and growing market that you can take advantage of. 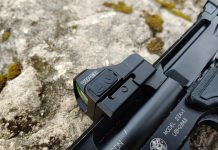 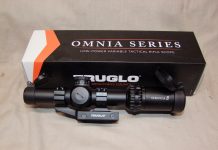