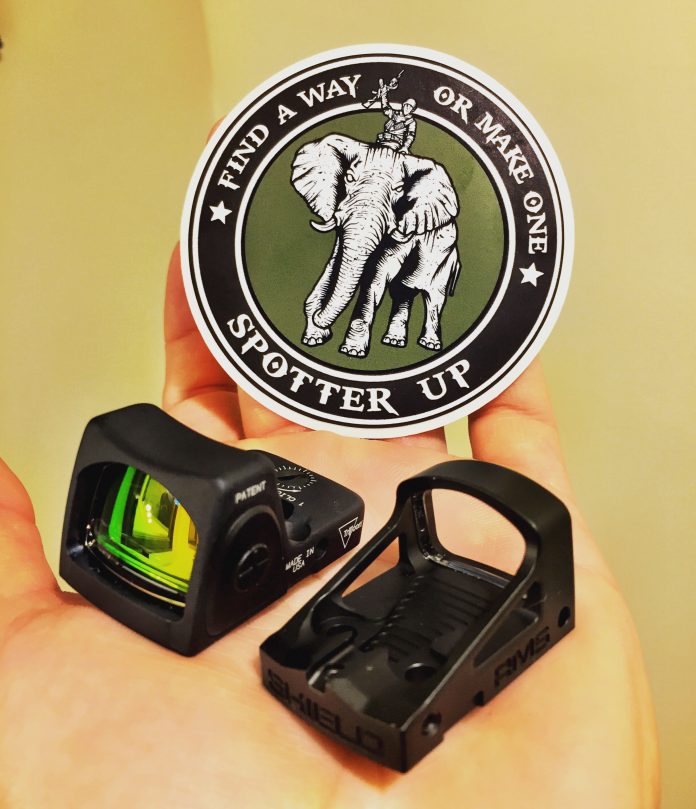 2017 is the year that I decided to start shooting miniature red dot sights on my handguns, and I decided that i would share my experiences and thoughts with our readers in the interest of potentially educating others. This will hopefully be the first in a short series of posts I will write detailing my journey. I will kick it off with a video from John Lovell of Warrior Poet Society as a primer, he makes some good points which are germane to this article.

While I am arguably late to this party with respect to the larger shooting community, in my opinion the advantages of using a red dot optic instead of (or in conjunction with) iron sights has become too obvious for me to ignore. The ability to stay target/threat focused while you are shooting instead of having to shift your focus between three focal planes (target, rear sight, front sight) is highly desirable to me in my endeavor to make my shooting performance (both competitive and defensive) more efficient. Basically using a red dot seems like cheating, and if you ain’t cheating, you ain’t trying. Of course I want to shoot fast and accurately, but I want to do it more faster, more easily, and at more distances. The problem I have with shooting irons is related to the fact that you have three focal planes to shift your focus between in order to set up most shots. With a red dot optic, you simply focus on the target, superimpose the red dot, and press. As a friend of mine who knew about shooting things once told me, “just put the thing on the thing”.

In this video, Steve “Yeti” Fisher of Sentinel Concepts and Jeff Bloovman of Armed Dynamics discuss many aspects and considerations of running red dots on pistols.

While I grew up around guns and enjoyed shooting recreationally as a kid, I didn’t start taking it seriously and competing until 2015, and since then I’ve spent half of each year deployed in Afghanistan where ironically I don’t get to shoot as much. I don’t have decades of experience shooting irons and I’m a relative newcomer to the concept of performance shooting, so making the transition from shooting irons exclusively to a red dot sight should theoretically not present a heavy learning curve, especially since I have plenty of experience shooting red dot optics on other platforms, mainly rifles.

I’ve managed to place respectably in some local USPSA matches, but the most recent classifiers I’ve shot still land me in the C class, just shy of the B class which is barely above middle of the pack for that game. I’ve achieved Expert in CCP division for IDPA which is slightly better, but still very average among the cadre of shooters in my circle now. I have plenty of work to do on efficiency in my movements, reloads and fundamentals, but one glaring bottleneck in speed I’ve noticed is the ability of my eyes to shift focus from target to front sight post, and vice versa. My eyes simply cannot shift focal planes as fast as I want them to.

Furthermore, shooting target transitions with iron sights–especially when they are close together such as with plate racks or silhouettes within a few feet of each other–requires me to close one eye to focus, even though i usually shoot with both eyes open. If i don’t close one eye to focus then the targets blur and can overlap each other and blend together. This is very disorienting and causes me to lose track of what I’m aiming at. As you can imagine this is a bad thing when you are trying to shoot fast and accurately. I usually have to open and close my eyes and start the whole sight picture over again, refocus on the target, close one eye and then shift focus to the front sight post. It’s not a quick process and I’ve experimented with various methods to increase my efficiency (such as target focus/fuzzy sights), but my eyes just aren’t very good at using the triple-focal plane iron sight methods. I am positive that with enough practice on irons, I will be able to get where i want to be as a shooter (although is anybody ever satisfied?), but I’m ready to start cheating, with the expectation that shooting a red dot will help to expose the shortfalls in my abilities/fundamentals, and actually do as much or more to improve my overall shooting skill as shooting irons exclusively would.

This is the biggest reason that I wanted to move to red dot optics. I’ve used them enough on rifles to know how easy and intuitive they are to shoot, and have been able to pick up my buddies rimfire open pistol with a red dot and be pretty competitive at some steel challenge and NSSF matches. Outside of those experiences, the only times I’ve shot a centerfire pistol with a slide-mounted red dot was the time i took a few shots i took with my buddies Salient Glock 17 with Trijicon RMR, and another time when I shot one of the range officers Glocks fitted with an ALG 6 Second Mount and an Aimpoint. Both experiences left me with the impression that the red dot would allow me to align my sights on target and deliver precise fire MORE EFFICIENTLY (i.e. faster) than with irons sights. Time to find out!

COMING SOON: The WHAT (Trijicon RMR, Shield RMS and the Glock 17 MOS)

Here are additional reference publications that make the strong case for red dot optics on pistols:

Scott “Jedi” Jedlinski of the Modern Samurai Project was a guest on Ballistic Radio recently talking about his philosophy and experiences with shooting red dots. Scott recently made Master class in Carry Optics Division in USPSA and has become known as “The Red Dot Guy”, teaching red dot specific classes locally here in Northern Virginia.

Aaron Cowan of Sage Dynamics wrote an excellent and data-centric white paper on red dots for duty use, primarily aimed at giving law enforcement agencies a legitimate reference paper to facilitate their acquisition of red dot sights. Below is a very informational podcast from Practically Tactical where Aaron talks about the data findings behind his white paper, which points strongly towards a benefit to using red dot sights in force on force training.

This article brought to you by our friends at SpotterUp. The author is Joshua Shaw.