A cold-bore shot in the shooting community is simply defined as the first round fired from the muzzle that day, a shot taken when the barrel has been undisturbed, is cold, and barrel fouling has not interfered with the round—as opposed to a rifle that has been shot. The theory of the cold-bore shot is that the bullet fired from a cold bore will differ from one fired from a heated barrel (more than one round through the barrel).

In the sniper schools that I have attended, a cold-bore shot at any extended range is pretty impressive. This is simply due to the fact you were able to properly compensate for the bullet deviation in a “cold bore.”

How does this apply to our world of precision shooting? Is it truly a “cold bore?” Does it affect our first-round impact? Below is my explanation of cold-bore shooting, along with the physics to further explain:

If the barrel is “cold”—before any bullet passes through the barrel that day—we can expect that the round will be high and right or high and left of the desired point of aim by as much as five MOA at 100 yards.

A barrel, being a metal object, will bend under heated conditions. However high the temperature, metal will bend. Considering physics, friction, and the properties of metal under heated conditions, we should assume that a barrel that is continuously fired will get hot and bend. If the barrel is cold at the first shot of the day and we impact high, then when the barrel becomes heated as rounds two through five are fired, how do we impact point-of-aim? How does this make sense by the laws of physics? After all, the hotter the metal is, the more rapidly it begins to bend.

Take a look at it in these terms: After one round has been fired from a high-powered rifle, we are able to still touch the barrel comfortably. But after rounds five through 10 are fired, it can begin to burn the skin fairly quickly. By rounds 20-30, you can almost light a piece of paper on fire when touching the barrel. Knowing that the barrel heats up when multiple rounds are fired, and the barrel being a metal object, shouldn’t the barrel bend, thus causing a degradation of accuracy? As we all know, this is not the case when grouping ½ MOA – 1 MOA at 100 yards. Typically, the shooter will place four out of the five bullets within the specifications of the rifle—the one round that got away being the cold bore.

The question is, then, is cold bore a legitimate issue? I believe a cold-bore shot is nothing more than a cold shooter.  As humans, we weren’t built to have an explosion happen six inches from our face.  Our bodies’ natural reaction to defeat this sudden violent concussion is to flinch. When the body flinches or tightens, it contracts its muscles, causing our body to “shrink.” When the body does this, we become a smaller object in order to protect ourselves from oncoming danger. This directly affects our point of aim and point of impact. As our body shrinks/becomes slightly smaller (closer to the ground when in prone), our rifle sights will rise (as to when you let out the air in your lungs as opposed to a full set of lungs), causing that initial errant shot.

In order to defeat this, proper dry fire takes precedence over live fire. Our brains work off of repetition, also known as muscle memory. Once you do things long enough, your brain becomes used to that nature of operation, which we call a habit. When dry-firing a rifle to the point that the brain will not anticipate recoil when the trigger is pulled for the first time (because it is used to only a click), you will see that your cold-bore shot during live fire will dissipate.

To reinforce my point, take a shooter shooting a group (five rounds) at 100 yards. If the shooter then immediately gets on a “cold rifle” that has not been shot, his cold-bore round is gone. All of the next five rounds fall within the rifles specifications.

So again, is this about a cold bore, or a cold shooter? 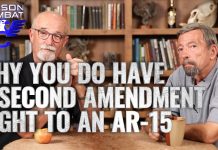