I cannot begin to categorize the level of stupid I’ve seen and read online surrounding this from all sides of this devastatingly tragic event.

So stop it. STOP! Fucking stop.

Before we address some the utter horseshit passing as analysis let me address why these attacks can happen and do happen in a free society. I have in the past and because of how a free society operates I’m sure I will need to rehash this again…

The only reason you, your family, your friends, your neighbors, and anyone else goes home safely without deliberate incident each day or each night is because nobody decided you were worth harming. It’s an analysis of risk vs reward and you ended up that day, like every other you weren’t assaulted, not being worth the risk to anybody. There are several personal and external factors that can influence that decision for each and every member of society but the crux of it is you simply weren’t worth harming for any reason to anyone else.

It was not the police, or the law against it, or any moral or ethical reasoning.

Those are influences that can be, and in this case were, disregarded at will when the decision to attack was made. Every attack on any scale, the attacker judges risk/reward and decided the reward was worth the apparent risks. The police, security, venue rules, the law, and personal/societal ethos are ultimately only dissuasive not preventative.

Additionally all those influences count for next to nothing when the attacker/(s) decide surviving is optional or undesirable in itself.

Because we are a free and social society we are soft targets and anyone who comes up with reasoning to do so can take advantage of the fact that we gather in places for work and entertainment.

We can and do mitigate these risks with certain amounts of screening, monitoring, and staffing for security and emergency response both public sector and private. But these do not eliminate risk, only lower it.

22,000 people were closely packed together to enjoy a concert and it was targeted. The “Big House” in Ann Arbor Michigan has had crowds as large as 115,000. We put ourselves in places that make tempting targets.

We aren’t going to stop gathering and living. Nor should we stop. We as free members of a modern society can, will, and should keep enjoying the benefits of that society and we should do so without fear.

This doesn’t equate to being reckless or naive, but that concern shouldn’t paralyze or stop us. Be aware, not afraid.

What we have a tendency to put out of our minds are the inescapable risks a free society constitutes. We also like to overestimate our mitigation efforts and ascribe to them effectiveness that is largely attributable to a lack of motivation on the part of potential assailants not the effectiveness of the policy.

Gun Free Zones, TSA Screening, even NICS (arguably the most effective of the three) have been circumvented. Nothing can make them foolproof and for the most part they cannot be made more efficient than they already are (or arguably aren’t). Most arguments to the contrary such as “Universal” background checks are more an emotional panacea than an effective or enforceable solution.

All multiple shooter, false flag, deep state conspiracy theory types can kindly stop reading. I’m not ascribing you the intelligence necessary to follow any of the analysis that follows. 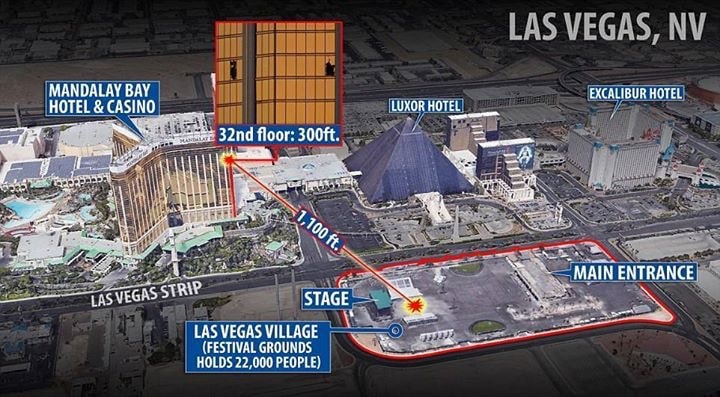 While we still don’t know the specific motivator or particular circumstances behind the attack the overall astonishment and asinine “he couldn’t have done it/how could he do it?!” speculation is well…

How did he get that many weapons and that much ammo into the hotel?

Through the front door. The casino hotel serves hundreds to thousands of people daily, they all have bags and luggage. Some are even there for events related to shooting, training, or competition. Luggage is not out of the ordinary, firearms aren’t even that out of the ordinary. Among the thousands of bags and people coming and going who was going to pick up on the shooter specifically. Oh, and he was a known spender in Vegas which gives staff extra reason to not get in his way and be very helpful so that he spends more.

People assume something would be out of the ordinary… that’s an after the fact justification and not a sound theory based in reality. The reality is no one gave this guy any more mind than any other hotel casino guest, why would they. No threats on social media, calls to the venue, calls to the hotel, nothing to flag a threat.

How could a 64 year old do this? It was too far… How could he be accurate? No way he could shoot that fast and control it… and other nonsense..

There’s a 63 year old man wielding a 30lb rifle from the shoulder. But there’s no way this other guy in his 60’s could have effectively fired a notably low recoil rifle from a supported position… Makes sense…

No matter what utter pile of garbage reasoning you come across on the trolling depths of the internet, this attack was not as difficult or complex as people seem to believe.

The M16 has an effective point target range of 500 meters. A point target for those who do not know is a single man sized target standing on its own. The effective range against an area target is 800 meters. An area target would be a vehicle, equipment, or small cluster or troops (3-5). The shooter was well within both of those distances.

And while no, the AR is not precision controllable in full auto against a single target as people are tripping over themselves to point out currently. There were 22,000 people at the venue tightly packed listening to the concert.

High fire rate accuracy is dependent on the size of the target. A small target would require a shooter to reacquire and fire short controlled bursts. 22,000 people is not a small target.

The fact that the casualty count was 86 dead and 458 wounded is tragic, but not unbelievable.

My apologies those were the stats for Nice France, method of injury in that attack was a truck.

Las Vegas has 59 dead and 520+ injured as of latest count… again, tragic but not unbelievable.

So please… to all those perpetuating the idea that one determined evil individual could not possibly have committed this act… You are wrong.. and stupid.

We continue to await more information on the motives of the shooter and are watching the inevitable calls for gun control.. Apparently we need to ban Silencers because they were not present during the attack nor is one currently attributed to the shooters ownership.