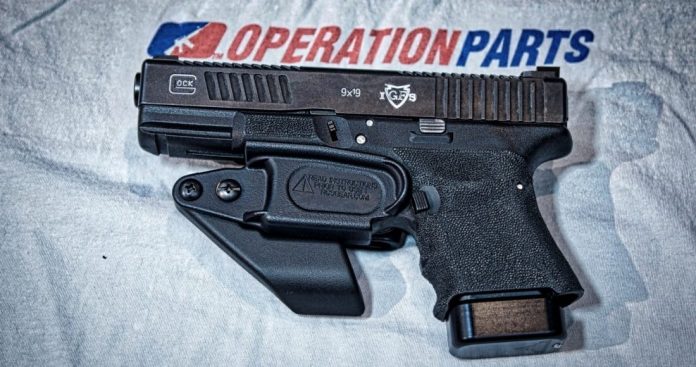 James Yager is not shy and has no issue telling you how he appendix carried before it was called appendix carry. He’s not alone, my uncle, an officer with the NY State Police back in the 60’s, 70’s and 80’s would Appendix carry a J frame without a holster.

For many the idea of a gun tucked in your belt pointed at your junk without a holster is just insane. I love my kids and have no intention of having more, but that does not mean I am prepared to risk blowing off my nuts, or my femoral artery.

With the invent of low profile injection molded polymer and Kydex holsters, I don’t have to live on the edge of sanity with Yeager or my equally nutty uncle. (For the record I’m not picking on Yeager.)

We have done several reviews on appendix carry rigs over the last few years mainly because I am always on the lookout for a better holster. Recently Raven Concealment made a better holster even betterer. I know betterer isn’t a word, but I don’t care, cause it is betterer. Also, I like making you read made up words, so I can get nasty emails about my inability to properly write.

The Vanguard 2 is the most minimalistic holster you can have and still call it a holster. Frankly calling it a holster may be a stretch. It is a completely encompassing trigger guard with a belt attachment.

The Vanguard 2 holds to the gun super tight. Check out the video of us trying to shake the gun loose.

Secondly the trigger guard is completely protected by the holster so as not to allow any way to engage the trigger when properly mounted. This is incredibly reassuring when the gun is pointed at your personal happy switch.

After about 45 days of wearing the Vanguard 2 holster, we got a call asking us not to publish our review because Chappy and the team at Raven wanted to send us over something special.

The next day we received an upgrade kit. Taking from the huge success of the Eidolon Holster (Review in cue), The Vanguard 2 Advanced has ben upgraded to include what many call the Eidolon wing (Raven calls it the RCS CLAW) as well as a new belt attachment option called Overhooks. 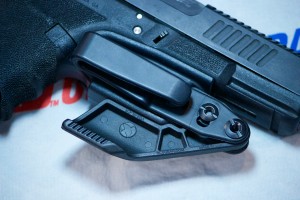 The RCS Claw, a nifty simple piece of injection-molded goodness, is designed to press against your belt. This creates a cantilever action, which brings the gun into your body for a tight fit. The idea is this claw will reduce printing in the most shapely of gentleman, like myself.

As a full figured male (it’s not my fault chicken wings taste so good), my sexy curves can get in the way of appendix carry. Think of the Vanguard 2 Advanced Kit as a pushup bra for appendix carry.

The Overhooks allow for a faster process to engage or disengage the holster from your belt while still securing it tightly to your body. Like the previous soft loops, they will allow you to tuck a dress shirt in should the need arise.

You can you buy the Vanguard 2 Advanced kit in a complete package for about ½ the price of a standard appendix carry rig. Or you can buy just the upgrade kit for your existing Vanguard 2. I love when companies support the products you already spent money on instead of forcing you to buy a completely new set of gear to receive the updates.

After wearing this now for about 90 days, there is good and bad to share with you.

None of the issues we found with the holster are specific to the advanced version.

The most common complaint is the gun and holster need to be removed from your to re-holster the gun. This is not like most holsters where you can attach the holster to your pants as you get dressed and then slide the gun in.

This also goes for if you ever have to pull your gun in self-defense or as an officer you can’t just re-holster. This likely is why the Overhooks were added as an option; they make taking off or putting on the holster an easier process. Since most of us don’t draw our guns to use on a regular basis. I don’t have an issue with this challenge, but for some reason it is the item most often complained about. I am sure the internet lawyers, keyboard warriors and basement trolls will be more than happy to explain why this is not the type of holster an operator would wear.

Because the gun itself does not rest inside a piece of leather or Kydex, I have noticed the finish of the gun is getting scratched up. Especially on the barrel at the breech that often sits behind my pants button. I train with and carry my EDC gun regularly. I look at scratches as proof of that use and adds character to my firearm. In this regard, I’m a rarity, unfortunately.

The positive retention of the trigger guard has a loud audible click that tells you that it’s in place. That makes me feel secure when attaching a loaded pistol near my baby maker.

The RCS Claw made a bigger difference than I first expected. I have run an Eidolon, and the most comfortable configuration I wear does not have the RCS Claw attached. I assumed I would ultimately just use the overhooks and not use the RCS Claw on the Vanguard 2 as well. I was dead wrong. Having now worn it with the Claw I will never go back to being without it.

The Overhooks are in line with my previous favorite belt attachment system. I had included in the original, unpublished review of the Vanguard 2 that I was not a fan of the Soft Loops they sold and intended to install another brands belt hooks. Now having used the Overhooks I am thoroughly happy and will be making no changes to the holster.

Comfort is something I talk about a lot during reviews. Let’s face it with left-wing dingbats creating such a negative energy around gun ownership, companies limiting rights of its employees to carry on the job and a myriad of other issues it’s hard enough for some people to commit to carrying a gun every day. If the gun is heavy and the holster is uncomfortable, then it becomes easier to justify leaving it at home.

The Vanguard 2 Advanced is perfect, on the run, stepping out to grab something from the store and all those other items that justify a grab and go holster. The lack of bulk means fewer pressure points, less weight, and fewer corners to poke you. 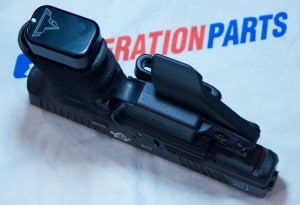 It’s the perfect car holster! I ordered a second with the lanyard kit to keep in my center console. If I have to take my gun off to go into my son’s school, run into the post office or other concealed pistol free zone (that’s for you Tom Lambert) I can leave my main holster attached to my pants while securing the firearm in the car in a manner where the trigger is protected. Sometimes when I’m driving for hours at a time, I will put the Vanguard 2 holster on the gun and prop it in my cup holder or console. With the lanyard attachment, I can draw the gun quickly but at the same time not worry about rattling around and getting a pen stuck in the trigger guard and causing an AD/ND.

At the end of the day, you need to feel comfortable with this style of holster if you’re going to use it. Initially, I was skeptical. Now I can’t live without it.

You can see them in person for yourself at a local retailer like Ann Arbor Arms or buy direct from Raven Concealment http://raven-concealment-systems1.mybigcommerce.com/vanguard-holster-system/ Prices range from 19.99 – 44.99 and come in several colors.