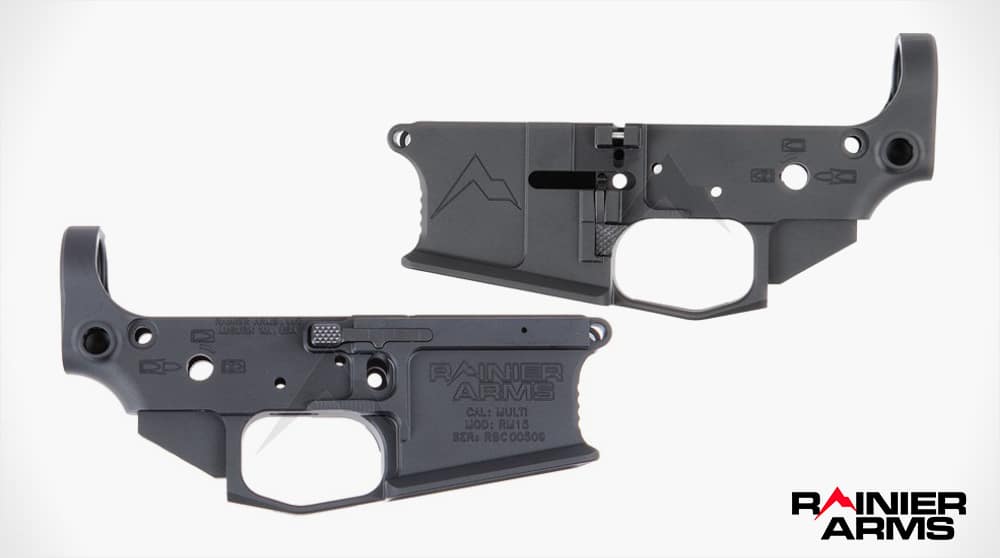 Rainier Arms has announced a Mod 3 version of its precision-cut match billet ambidextrous lower receiver. Designed as an all-around improvement on the standard MIL-SPEC design, the Mod 3 has a lot of features that make it stand out from the vast majority of AR-15-type lowers.

It is machined from billet 7075-T6 aluminum, which is common to forged lowers but there are more than a few billet receiver makers out there using softer 6061 alloys. This means Rainier doesn’t have to resort to over-building the lower to maintain strength while adding weight and bulk.

Machined lowers can be cut a higher degree of precision than other receiver manufacturing techniques in theory but the real benefit to working with a billet is that it lets Rainier go off the reservation, as it were, when it comes to AR-15 receiver design. These lowers have a lot of features you don’t see in your average cast or forged receivers.

There are plenty of little tweaks like quick-detach sling swivel sockets integrated into the left and right sides of the buffer tower, a generous and wide-open magwell for fast, reliable reloads and an integral, skeletonized and lowered trigger guard. While clearances and tolerances can be wrenched down with billet receivers, there’s always some wiggle room needed. No worries there as the Ambi Lower Mod 3 is equipped with a tensioning screw to eliminate wobble between the lower and any upper receiver. But the biggest deviation are its ambidextrous controls.

The AR-15 design is fairly lefty-friendly even with right-hand ejection; assuming the ejector, extractor and shell deflector are working right and the buffer is right for the gas system spent cases don’t often bother lefties. The same can’t be said for standard lower controls.

If you’re a left-handed shooter or a righty shooting off-handed the controls are obviously in all the wrong places. While certain techniques can be used to work around the now-backwards bolt catch and magazine release, they’re no where near as fast or natural as ambidextrous controls.

Rainier’s lower has a pre-installed ambidextrous bolt release levers and an extended bolt catch lever that — while not mirrored — are fully-ambidextrous. It’s otherwise a stripped lower designed with the Norgon Ambi-Catch magazine button in mind, sold separately for $89. Other parts, like the charging handle and safety selector are decisions left up to the user.

Rainier’s Ambi Lower Mod 3 is competitively-priced with other billet lowers at $234, and that includes plenty of billet lowers that don’t have the features, integrated components or the ambidextrous controls.