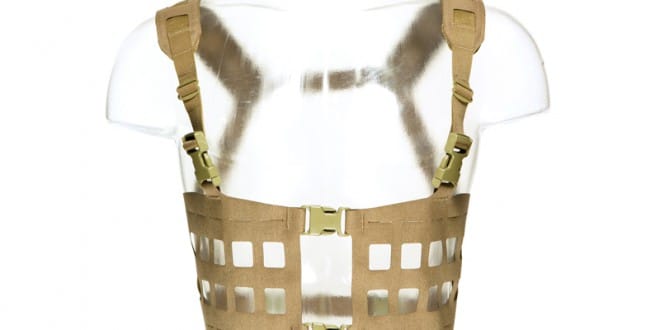 We love Blue Force Gear and that should be no surprise to our regular readers. One of the main reasons for this is they do not rest on old technology. They’re innovating and using the newest advantages in manufacturing and materials evolving and updating battle tested systems. They’re not re-inventing the wheel, instead they’re finding ways to make them lighter, more durable and less expensive.

In the past we have reviewed the Ten-Speed mag pouches, SOC-C Belt system and Helium Whisper technology. This time around Blue Force Gear has pushed the envelope with a new line of chest rigs. The RACKminus and SPLITminus are variants on the same design with the later having additional detachment points. These new chest rigs from Blue Force Gear are part of a line of gear in the MOLLEminus ultra-lightweight product line.

MOLLE is an attachment system designed for the military but also now used widely by many organizations to attach gear. It is commonly used on bags, chest rigs, plate carriers, belts and any place you might want to attach one piece of gear to another.  This is achieved by a grid system where a piece of rugged fabric is woven between and then secured typically using a snap or hook and loop. This mesh system is sown to the back of the gear and adds both weight and potential failure points from the massive amount of stitching needed to secure it.

MOLLEminus is the proprietary name for a technology developed by Blue Force Gear to greatly reduce the weight, complexity and failure points of traditional MOLLE gear.

MOLLEminus technology starts with Blue Force Gear’s proprietary ULTRAcomp™ laminate (like what we have seen on the Ten-Speed magazine pouches) material which is half the thickness of a dime and 4 times as abrasion resistant as 1000d CORDURA® fabric.

The ULTRAcomp laminate is laser cut to create a fully MOLLE compatible matrix of slots. This eliminates cut’s or stitching that could weaken the integrity of the material.

The end result is lightweight material stronger then mil-spec requirements that is made from a single piece of material, so there is no weak joints or stitching.  The laser cut voids reduce the weight even further removing 2 times the amount of material (no webbing and no backing) found in traditional MOLLE .

SPLITminus is a chest rig based on the classic split-front chest rig used in the military for years. It has 2 side release buckles for easily donning or doffing (removing) or for spreading out in a prone position. This allows you to lay comfortably flat with no magazines or buckles digging in to you and still provides access to your pouches.

The straps are fully adjustable and allow for a very comfortable fit regardless of height or weight. For those of us who are not at our premier  fighting weight this adjustability is much appreciated.  Four different points for height adjustment allow this to fit even the most non symmetrical body types.

There is two quick release buckles in the back allowing you or a buddy to release the pack even in a prone position. There is two buckles in the front connecting the shoulder strap and then two more that connect across your stomach.  The placement of these buckles is extremely useful, allowing you to lay out your gear easily prior to donning it as well as for doffing (removal) by you or a buddy once fully loaded. The rear buckle placement would come in very handy when trying to get a buddy out of gear if injured with minimal movement to the wounded person.

What is it Made of?

The big deal is that this is the future of MOLLE. Less weight, less failure points and an attachment system that is easy to use. If you have ever tried to install MOLLE correctly you know it is a huge pain in the ass. Due to the annoyance factor or a pure lack of understanding,in civilian markets such as gun ranges and out camping, I have seen more improperly mounted MOLLE then I have seen proper.

The voids that replace the old grid system make proper MOLLE instillation easy. No mashing up your fingers or looking for a push tool like a spoon trying to weave a basket like an Amish homesteader.

I have had this rig now for a few weeks. Due to a very hectic schedule I was unable to make it to the range during initial testing. So for a an everyday wear test I grabbed all my Helium Whisper gear that we used in the BFG SOC-C belt review as well as a series of mag and canteen pouches that I had attached to an old surplus vest that was part of a BOB.

What I noticed when lugging all this gear around on my body for a week (I work from home so no the police did not get called due to me working my day job dressed like I was going to war) was that this is a very comfortable way to distribute a massive amount of weight. I had a full canteen, 4 Glock 17 round mags fully loaded, 6 AR-15 30 round magazines fully loaded, Flashlights and a Trauma kit. There was no stress points or chaffing from the gear. I did not feel confined or hot like I had in my previous surplus chest rig.

When I did get a chance to take it to the range and get some shooting the results were on par with what we expected. The gear is made to allow for proper range of motion even when full loaded. Standing and bench shooting did not become impacted even with a full load out kit.  When moving to prone it was very nice to be able to unclip the front spread out my rig. It allowed for me to lay comfortable as well as have access to my magazines.

Who is this For?

The uses on this are a bit different then for the SOC-C Belt we reviewed in the past. While this could make an excellent range rig especially for prone shooters it is not as good as a belt for competitions.

If you are in the Military and especially if you are out on patrol this is an excellent light weight highly modular piece of gear. There is no doubt this product was built for and designed for actively deployed men and women who are in harms way. Any actively serving person will find this MOLLE system to be vastly superior to standard issue equipment.

If you are in the police and have the ability to purchase your own gear this could be for  you as well. Having access to multiple mags and a trauma kit on demand is never a bad thing. This is a piece of gear you could manage in a truck that would be very easy to don and doff.

If you are a prepper or the type of person that has a BOB or GHB then you may want to consider this. You could load this rig up with many mags and provisions and easily hide it under a jacket. It would not stick out like a belt and could be easily grabbed to go. I have replaced the large surplus chest rig I kept with my BOB with this as it is much lighter and easier to conceal.

If you are interested in buying this please go check out the Blue force Gear Website. The retail price on the SPLITminus is $110 and the MOLLEminus is $100.