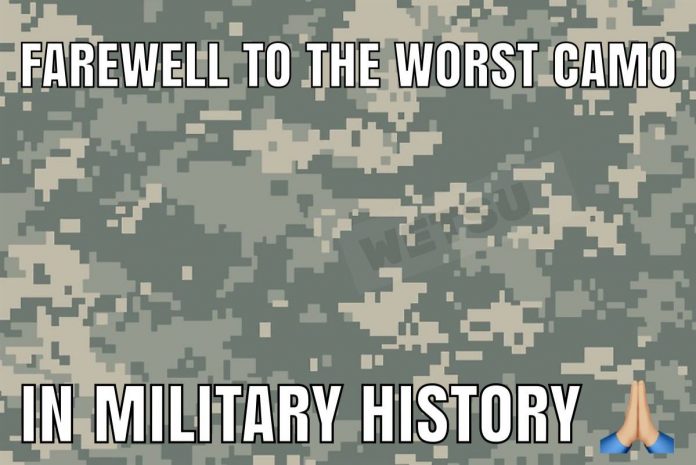 It’s over… It’s done… the worst uniform pattern in U.S. Army history has been put in the shallow grave where it belonged. ACU is dead. Long live knock off Multicam (OCP) which the Army scrambled to adopt after finally acknowledging they had made a mistake. The Navy has also canned the oddly chosen “Blueberry” blue camo uniforms for a more useful camouflage pattern that they have been using groundside and forward when deployed with the Marines and other ground elements.

Today puts to rest the two worst camo ideas the military adopted. Granted they were based off a very good idea that the Marine Corps implemented with an updated digital camo pattern. The desert and green uniforms the Marines utilized were effective and for some reason the Army and Navy wanted the same thing… but different… and so they picked patterns that worked nowhere. The uniform wars of the late 2000’s was a weird time.

Funny enough the most rational alternative choice to the Marines was the Airforce and their tiger stripe. Unsurprisingly, after a stint of derision (yet long enough to justify the uniform buy), the Army and Navy have completed the change away from the bafflingly useless camos.

The OCP Multicam pattern and the new green/black digital navy pattern still delineate the services as different, something I can support as a matter of pride and esprit de corps for your individual service. Knowing who’s a Sailor, Soldier, Airman, or Marine at a glance of uniformed service members is valuable. Camouflage is supposed to work though, and two branches rocking completely ineffective patterns was… embarrassing. It looked incompetent and tryhard, like a B or C rate action movie… except this was the U.S. Military.

RIP Weird camo choices. We won’t miss you. I do miss Desert Digi’s though… so comfy.