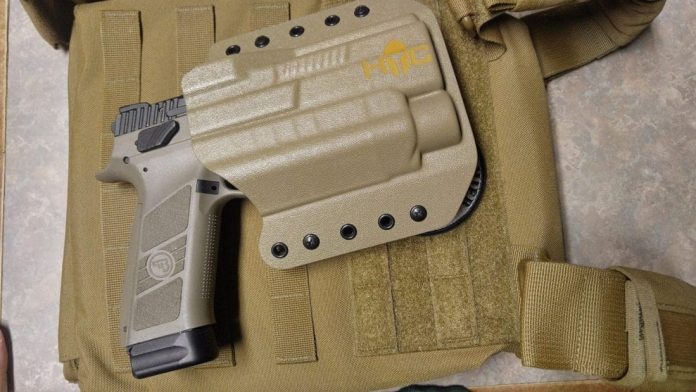 When I was first issued my concealed carry permit I went with what I thought was the wise route in weapon selection. I had read from many others that most new concealed carriers carried a gun much too large.

So I went with small, and affordable and ended up with a Bersa 380. It was a great little gun for the price, and it was easy to carry. From there I eventually moved to a Glock 26 and then to a Walther PPS. They were all compact guns that were small, lightweight, and easy to carry. They were also limited in capacity, had a short sight radius, and often grips too small to fully fill the hand. 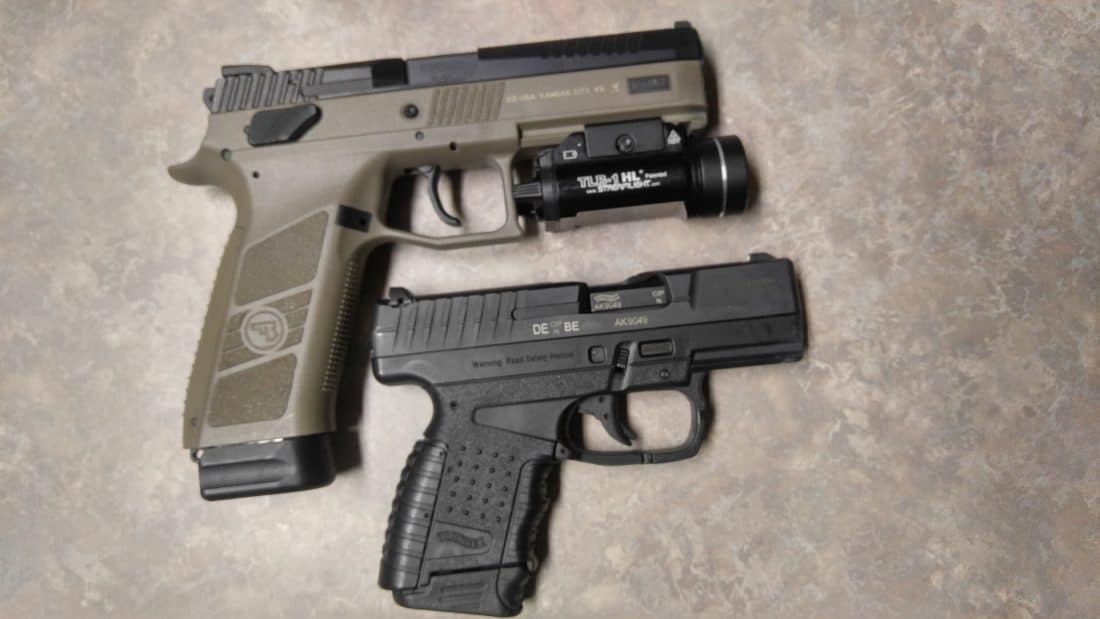 Over time I began trending a bit larger with my concealed carry handgun, going to a SIG P250 compact (Roughly Glock 19 sized) whenever possible. From there I finally settled on the CZ P09. The CZ P09 is a full sized 9mm handgun that holds 19 in the magazine and comes with an optional plus 2 extension for 21 total rounds.

The P09 has a 4.54-inch barrel, has an overall length of 8.1 inches and is 1.46 inches wide. It’s by no means a small gun, but I feel incredibly comfortable carrying it. Guns are supposed to be comforting, not comfortable right? Well, luckily they can be both.

Why a Full Sized Gun?

First and foremost a larger gun is easier to shoot than a smaller gun. The larger grips are more comfortable, the longer sight radius makes the gun easier to shoot accurately, and I have significantly more rounds on tap. The differences and ergonomic advantages were reason enough to go full sized for me. 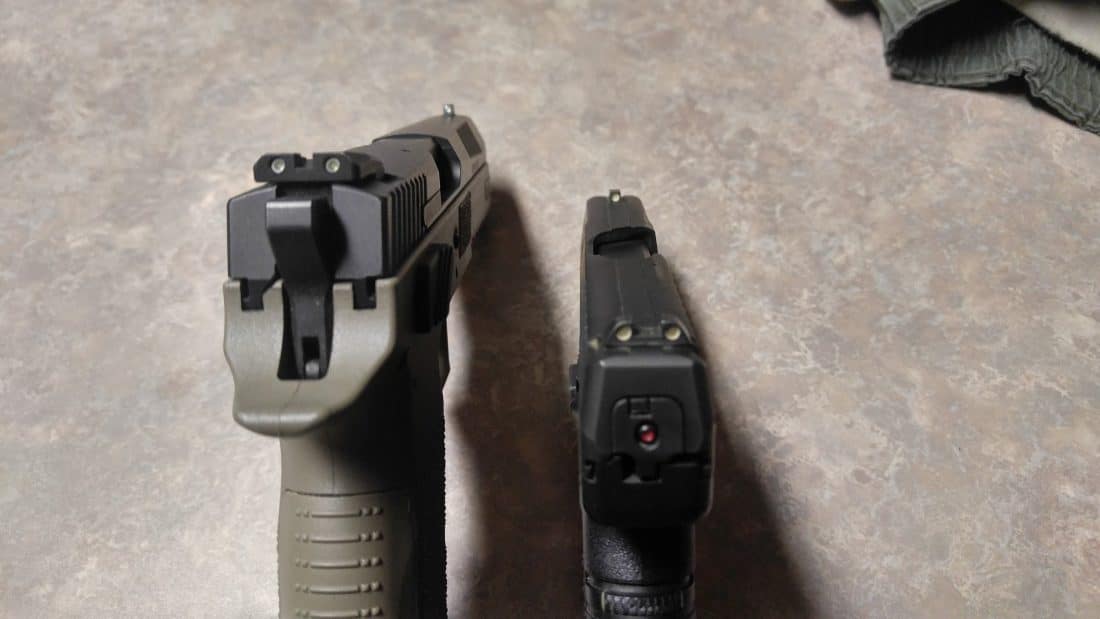 Regarding rapid fire, the CZ P09 is much easier to squeeze off round rapidly and accurately. This includes double taps, failure to stop drills, and just dropping rounds. The larger grip, heavier weight, and longer barrel reduces recoil and makes rapid shots just a bit easier.

In terms of ammo capacity, I use 7 round mags with the PPS, and I’d have to carry three of them to make one P09 magazine. Is there a need for that ammunition in a civilian self-defense scenario? Probably not. Maybe it’s just the former machine gunner in me, but I’ve never thought having too much ammunition was a bad thing. I certainly don’t want to die for lack of ammo. 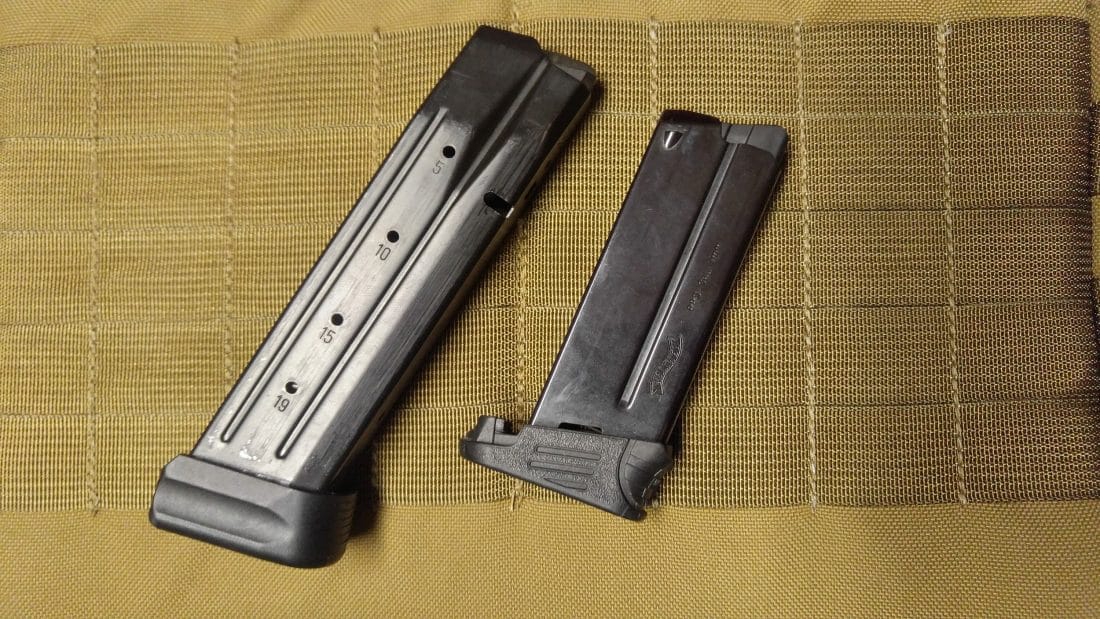 The longer barrel also gives me a hair more velocity with similar loads. The faster the bullet the better penetration I’ll get through barriers and thick clothing.

Many are right to point out the likelihood of needing that much ammunition is superbly small. That’s true, but the likelihood of me ever needing my gun as a law abiding citizen is also quite small, but I don’t leave home without it. I won’t be the one guy who needed it and didn’t have it.

A full sized gun narrows the threat gap when faced with an opponent armed with a long gun. That’s another long shot, but as we’ve seen it’s possible. The same goes for multiple opponents. Unlikely scenarios but I’m already planning for the unlikely by carrying a gun, and every single listed scenario has happened in the past and can happen again.

How to Carry a Full Sized Handgun 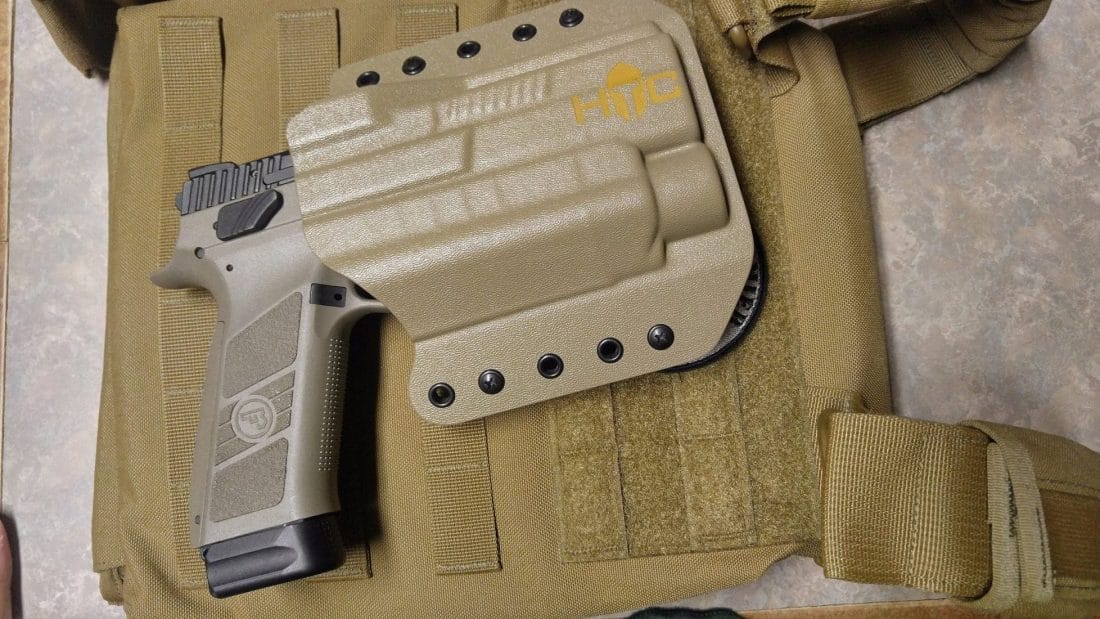 I also purchased several gun belts that were rigid and strong enough to bear the weight of the CZ P09. This keeps the belt from sagging or rotating in any direction. This extra support ensures the gun remains concealed and doesn’t sag below the cover garment. This also makes carrying the gun a lot more comfortable when it comes to day to day carry.

The combination of a high-quality holster and belt makes carrying the gun comfortable. Even if it’s large and in charge carrying it can be comfortable. It certainly took some time and money to experiment with what worked but wearing the gun day after day changed the way I carried. 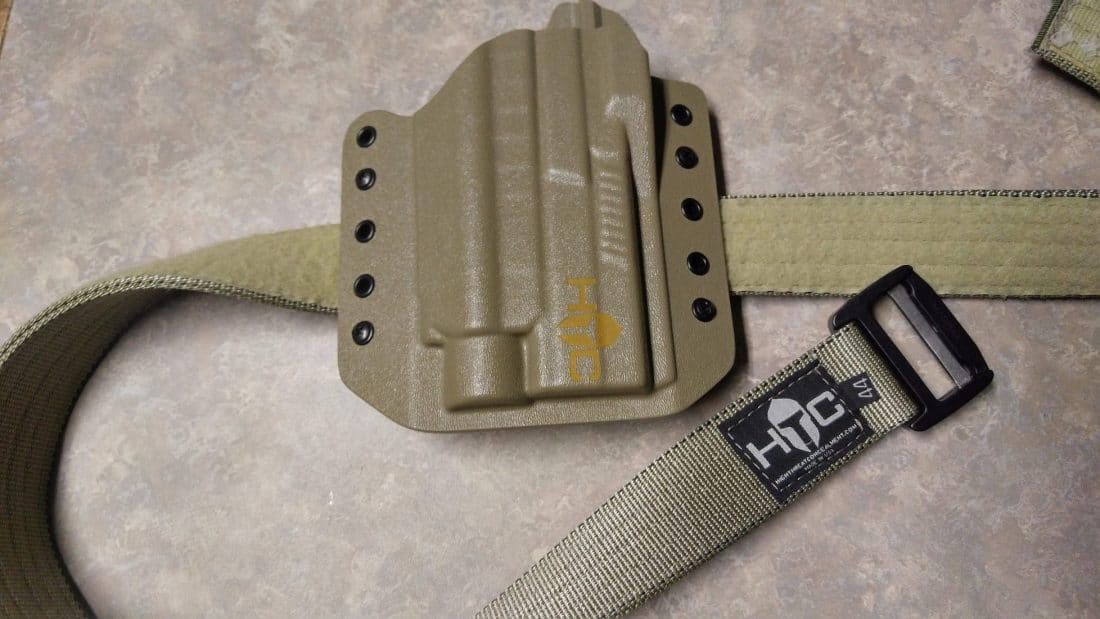 My current combination is the HTC Vantage and the HTC gun belt. The Vantage is an excellent holster and allows me to carry my CZ P09 and a Streamlight TLR 1 concealed and away from prying eyes.

But What About Printing?

What about it? I find the only people that actually notice a gun is printing is the person carrying the gun. People are too wrapped up in what they are doing to stop and look at my waist to determine if I’m carrying a gun or not. It simply doesn’t happen and I typically conceal my gun under nothing more than a T shirt. 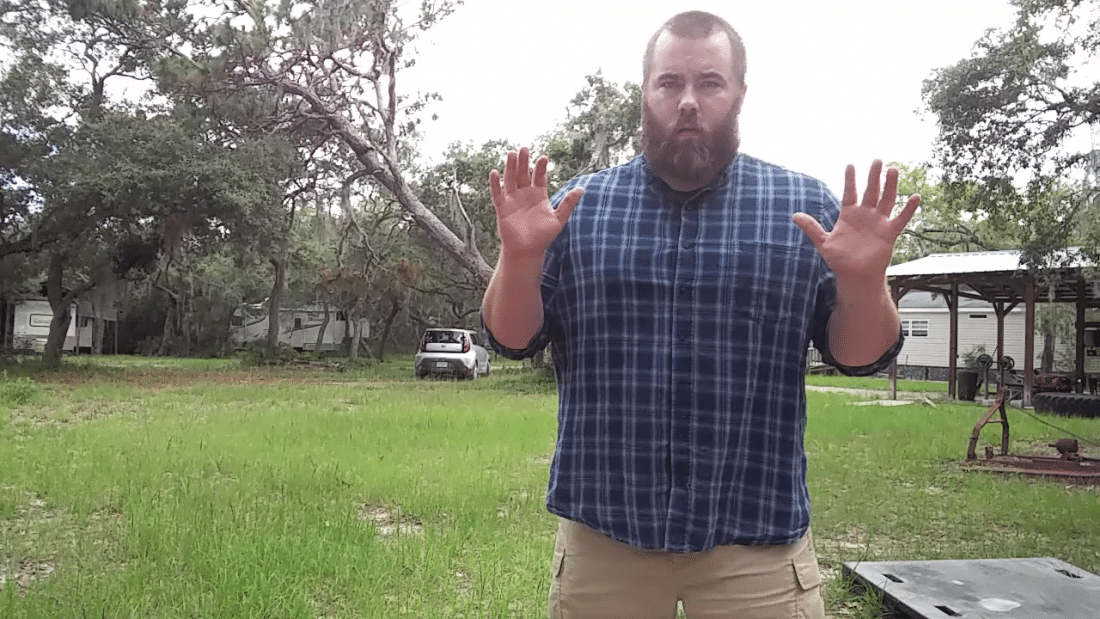 If I’m not breaking the law and even if they notice what does that change? On the off chance they notice it’s pretty difficult to tell If I’m actually packing or I have, for instance, an insulin pump. Printing isn’t something that keeps me up at night.

Admittedly I’m a big dude so I can carry a larger gun a bit easier than most (As a littler dude its pretty freakin’ easy too –Keith). However, even a small person could carry a decently sized firearm with a bit of dedication and practice. A Glock 19 gives you 15 rounds of 9mm and is still easy to carry, the same goes for the SIG P229. Combine those compact guns with a good IWB holster and gun belt and you’d be surprised at just how easy it is to carry a decent sized fighting handgun. 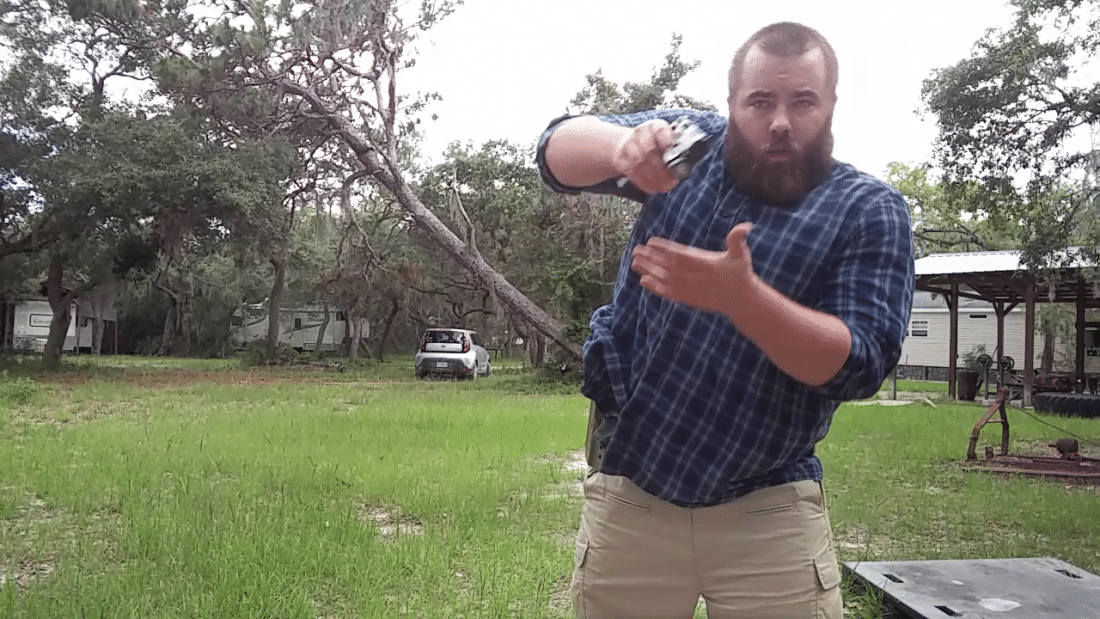 I still have my Walther PPS and still carry it on occasion. In some situations, it is impossible to carry a full sized gun. When I go a run I take the PPS, when I’m having to dress up I take the PPS. There will always be reasons to have a little gun, but when I can go big, I go big.