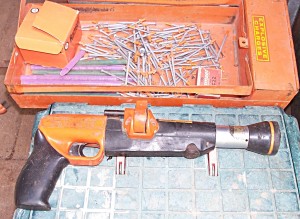 Fear over just what comes along with the 18 pages of background check legislation approved by Washington State voters last month has led some to wonder if devices such as nail guns and avalanche cannons would see increased regulation.

As expounded by John Havercroft to the Whidbey News Times, the definition of just what is a firearm as defined in the ballot initiative that takes Dec. 4 is subject to interpretation. According to the language of the referendum, virtually every transfer of any device “from which a projectile or projectiles may be fired by an explosive such as gunpowder” must in the future be accompanied by a background check beforehand.

“Home Depot, Lowe’s and other hardware stores sell Ramset nail guns, which use a gunpowder charge to fire nails, usually into concrete or steel,” explains Havercroft, asking if they would be regulated. “These nail guns have actually been used in the past to murder people.”

It is not as far-fetched as it sounds. Although the federal government does not require training to use a powder fired nail gun, in New York City, the fire department is tasked with issuing a Certificate of Fitness for would-be powder actuated tool users after submitting a letter of recommendation, a $25 fee and passing an exam. Operating one in the city without the certificate on hand can lead to a fine.

In Australia, a nation beset with some of the strictest gun control polices in the nation, powder-actuated tools such as the nail guns mentioned in Havercroft’s letter, must be registered and their use is restricted by license. Still, lethal accidents occur despite regulation, like the gruesome murder of a Chinese immigrant perpetrated by an unregulated gas-powered nail gun.

Havercroft asks similar questions about the sale of 12-gauge flare guns, which according to him are already determined to be firearms by the Washington State Police Crime Lab. Even the highway department’s avalanche cannon is considered a firearm under the law’s scrutiny.

“Even most of the little plastic champagne bottle poppers that shoot the confetti when the string is pulled are devices that fire a projectile with an explosive charge — there is a tiny gunpowder charge in most of them,” said Havercroft. “Will retail party stores comply with the required background checks, and will they be prosecuted if they don’t?”

While the letter may be an exercise in lampooning the murky text of I-594, the ballot initiative has already caused some unintended consequences.

Soon after the background check measure’s approval by voters in a 9-point margin, the small Lynden Pioneer Museum announced that it would be forced to pull from display a number of historical rifles over questions about the legality of their possession. With the guns on loan and 594 mandating that “all sales and transfers” of firearms are subject to background checks to include “gifts and loans,” the museum wasn’t comfortable with keeping the donated guns.

In the end, the non-profit museum was given a reprieve after a local Federal Firearms License holder agreed to perform the needed background checks required by Dec. 3.

Among the six other states that have established universal background check requirements, there have been similar incidents of unforeseen flaws due to poor wording. In Colorado last summer, a gun buyback event had to be canceled as the costs of checks to be performed on people expected to turn over unwanted firearms would have exceeded the budget for the sponsors. There are not exemptions in the law for programs such as these.

Gun rights advocates do not expect the looming implementation of 594’s requirements to lead to wholesale prosecution of otherwise law-abiding home improvement practitioners in the Evergreen State.

“While I-594 is so poorly written that it can be construed to include many items that are not firearms under federal law, there is about zero chance that it will be enforced that way,” Alan Gottlieb, chairman of the Citizens Committee for the Right to Keep and Bear Arms, told Guns.com. “No jury will convict and every prosecutor knows that. But this is what happens when anti-gun nuts write laws that they know nothing about.”