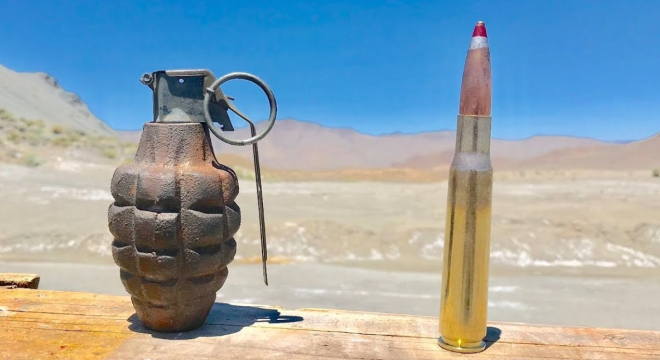 Inert grenade casings make great paperweights. They don’t make great .50 cal stoppers. In the above video from Edwin Sarkissian, he applies a little love from a Serbu BFG to an inert Mk 2 “Pineapple” grenade with, let’s say shattering, effect.

The classic Mk 2, introduced in the last days of the Great War, went on to become the staple U.S. grenade in both World War II and Korea, only being phased out by the Mk 26 “Lemon” grenade (guess what that one looks like) in the 1960s.

With its distinctive 40 knob surface, the cast iron body is instantly recognizable and is often found at Army-Navy surplus stores, gun shows and TSA baggage screening areas around the country.