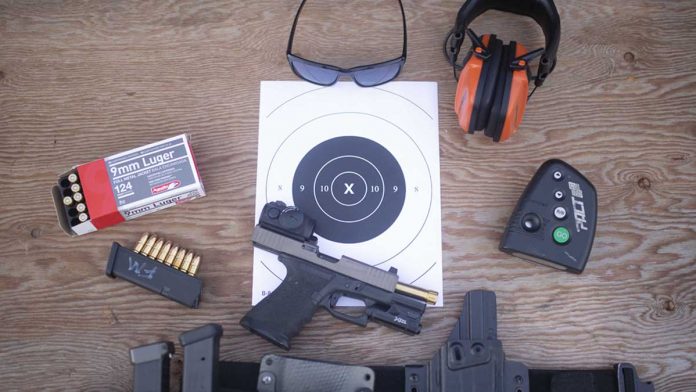 Designed by Bill Blowers of TapRack Tactical, The Hateful Eight may just be one of the hardest drills we’ve tried in a while. If you are looking for a for a way to really push the limits of your pistol shooting skills, and patience, when it comes to accuracy and reloads, well then look no further.

Shot on a standard B-8 style target from eight yards, the shooter begins with a holstered pistol loaded with four rounds and two more magazines loaded with two rounds each on their belt. On the buzzer the shooter draws and fires four rounds, reloads, fires two more rounds, reloads again and fires a final two rounds, all rounds must fall within the eight in (#8 ring) to count towards the total. The drill has an eight second par time and the target is scored as marked with a possible top score of eighty. If you really want to challenge yourself, try to shoot the drill under the eight seconds with all rounds staying within the black (nine and 10 ring) or increase the distance, if your feeling particularly skilled.

This has got to be one of the most humbling drills we’ve shot in some time. If you fumble your reload, don’t establish a good grip after your reloads, or get too heavy on the trigger things fall apart fast. But take heart, if the eight second par time is too tight for you, consider a ten or even fifteen second time, until you start getting the drill right. The goal of this drill is not to destroy your ego, well maybe a little bit, but rather to push you outside of your comfort zone for speed while still maintaining a high standard of accuracy and precision in your movements while reloading. Good Luck!