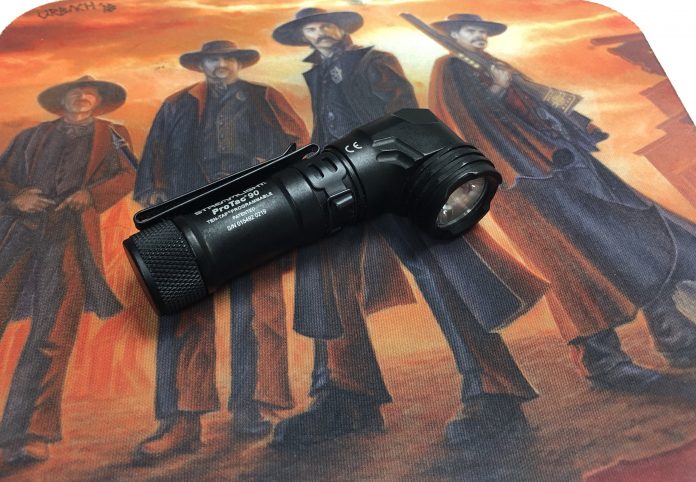 Everyone stop what you’re doing and check your pocket, desk, and immediate area. Find you flashlight please. Don’t have one? Shame. Phones don’t count. I’m talking your useful, ready, easy to get at EDC flashlight. If you don’t have one… shame.

Now go please correct that. The Streamlight ProTac 90 might be the way. It’s $40. As a man who’s neighborhood has lost power I believe… 6 times this month, it is a little more than a “just being prepared” consideration.

Those from a veteran background will probably recognize the enormous unwieldy “moonbeam” lamp on the left, the MX991/U that has been issued since the Vietnam War. On the right is the ProTac 90, the result of Streamlight’s engineers playing with a shrink ray in their lab. Adding an LED emitter and multicell power capability didn’t hurt either.

Simple, what was true on the large light is true on the smaller. The design is very easy to clip your shirt, pants, or gear and go hands off to accomplish any given task. The flat base also makes it easy to set on any flat surface and cast light as needed. The design won’t roll away if set on its side to provide light. It’s very good at staying where you put it, a trait round lights lack.

Unlike the massive predecessor however the ProTac 90 can also fit in your pocket. It makes for an easily portable everyday tool instead of a cumbersome space hogging burden. It retains all the advantages of the larger light, adds several new ones, and the only thing it didn’t come with was the fragile and easily lost lens covers of the MX911/U.

The Streamlight’s output maxes out 300 lumens with a candella of 5,400. It makes for a serviceable tactical light and its angle allows for a very easy two hand modified grip on a pistol while running the light. I’ll do more on this in a later article discussing pistol/light use, Travis has a bit on this though that’s already up.

The ProTac 90 has Streamlight’s Ten Tap programmable functionality which, in this instance, I find more of a boon than a bother. A pocket light like the 90 is a utility light first and a tactical light second, having the function on hand to switch between the two so the light acts how you need it too is phenomenally useful. I still don’t care for the strobe setting (1) but high only (2) and low/high(3) are what make the ProTac 90 such an exceptional utility light.

The ProTac is not limited to using CR123’s. The system will run off of AA cell batteries too at a reduced maximum output. If you need power you can cannibalize a TV remote, game controller, or any of a myriad household devices that have a AA and not a CR123. The CR123 being a “tactical” battery they don’t float around in the quantities AA’s do. I don’t think I’ve seen anything except certain cameras use them outside that tactical sphere.

Depending on what you are utilizing the light for primarily you may choose to run AA lithiums for the extended run time.

Durable aluminum construction and o-ring seals give the ProTac 90 an IPX7 rating. It is waterproof with a 1m/30 minute submersion rating.

There are different levels of “waterproof” and it is important to know your gear and its limitations. The ProTac 90 is going to be just fine in the rain or if it falls in a puddle or pond. It is not rated for a dive so don’t grab your air tank and go looking for sunken treasure but you’re not going to short it out if the sky opens up onto you.

Drop rating is listed at 2 meters onto a hard surface. So any of your typical drops, from a workbench, your hands, a cabinet, down through your engine compartment, none of those are going to decommission this light. Launching it skyward in a hail mary pass… you might get lucky, you might not.

Simple. If you don’t have an EDC light, get one. The ProTac 90 is waterproof, 300 lumens, multi-cell compatible, programmable for use, and will clip to you or hang on any flat surface. For $40.