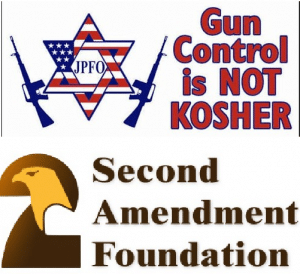 Gun rights group Jews for the Preservation of Firearms Ownership is set to merge with the Second Amendment Foundation according to reports.

Friday it was leaked by a former staffer that the group Jews for the Preservation of Firearms Ownership will merge with the Second Amendment Foundation, and not all are happy about the move.

The leak came from Claire Wolfe, a contractor to JPFO who resigned her position in opposition to the planned merger with the much larger SAF, which boasts some 650,000 members.

Founded in 1989 by the late Aaron Zelman, JPFO, like SAF, is a non-profit tax-exempt 501(c)(3) educational civil-rights organization. Although the Jewish faith is an eponymous part of the group, it has always welcomed members of all religions. According to the group’s website, “You don’t have to be Jewish to join JPFO; you just have to love freedom.”

Wolfe went out in a blaze of fire, posting a tribute to Zelman on her way out the door Thursday in which she proudly called the late founder, “a great man, and an uncompromising bastard.”

Wolfe then took a vocal stand on her own blog, spilling the beans about her viewpoint on the proposed JPFO/SAF merger in detail. She voiced her feelings that the board of the organization declined to listen to alternative plans and that the legacy gun rights group, known for its outspoken advocacy, would change fundamentally under a new SAF partnership.

“Will JPFO’s priceless, unique anti-genocide voice be lost? It will,” Wolfe wrote. “Will JPFO, the only one of its kind, aggressive, and eternally principled, be allowed to remain what it has been and must be? No.”

The balloon sent up by Wolfe soon led to an online petition to urge the stop of the proposed merger, calling it a betrayal of the legacy of Aaron Zelman. As of Monday, the petition has 265 signatures.

JPFO’s social media page has since been filled with posts from angry members who in a common vein contend that they knew little of JPFO’s financial problems while decrying the merger with SAF.

The news has some firearms writers apparently choosing sides. While the Gunblogger‘s feed posted Wolfe’s editorial on its masthead, John Boch at Guns Save Life, an Illinois-centered Second Amendment site, wrote a piece about the merger calling it “Good News.” This soon was followed by a free-for-all in the comments section with Wolfe weighing in on her side of the argument.

“JFPO will get a new board of directors and function independently,” Gottlieb said. “In the past we have absorbed KeepAndBearArms.com and Doctors for Responsible Gun Ownership and kept them running as they were before coming under the SAF umbrella.”

According to the report, Gottlieb also confirmed that JPFO approached SAF about the merger to begin with and that Wolfe’s leak and call to oppose the move will not alter the deal.

“JPFO and SAF will issue news releases when the merger becomes final late next week or the following Monday,” said Gottlieb.