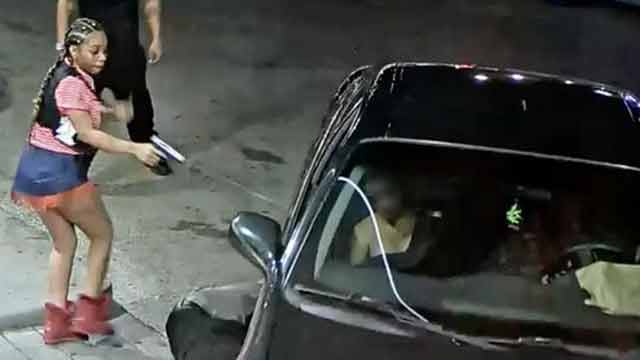 A young woman was in police custody within hours of shooting a man outside of a Detroit gas station early Sunday morning, and authorities are saying an anti-crime initiative known as Project Green Light aided in the timely arrest.

The shooting happened just after 4 a.m. and was captured on high-definition video, part of the Project Green Light system which is live-streamed directly to the police station and monitored 24 hours a day. In the video, the female suspect can be seen standing near a Dodge Charger with another female and two males, none of whom have been publicly identified.

A green Pontiac Grand Prix then pulled up and the woman retrieved a handgun from the glovebox of the Charger, despite one of the males attempting to keep it from her. The woman tucked the gun under her skirt, then walked over to the Grand Prix, where a brief, yet heated, argument ensued, a Fox affiliate reported.

Within seconds, the woman fired several rounds into the Grand Prix, striking the driver multiple times. The Grand Prix then moved forward, running over one of the males who was with the shooter but knocked to the ground before gunfire erupted. The other male was able to wrestle the gun from the woman before all of those involved, in both vehicles, fled from the scene.

The shooting victim was taken to the hospital for medical treatment of the gunshot wounds, which were determined to be non-life threatening. It is unknown what, if any, injuries the man who was run over suffered.

Authorities took images from the Project Green Light video of the suspects and gave them to local media. The suspects were almost immediately identified by a person or persons familiar with the suspects and within two hours of the shooting, the woman, as well as a male accomplice, were arrested.

Officials indicated that in this case, Project Green Light worked exactly as it was intended. Sgt. Michael Woody with the Detroit Police Department called the system and subsequent arrests a “huge success”

The video monitoring systems are currently in place at 13 different Detroit businesses, who advertise such surveillance with big, bold signs. The program started in January and costs business owners around $5,000 for set-up.

When city officials announced the initiative earlier this year, they expressed hopes that it would lead to less crime and better, more efficient and quicker identification of suspects and therefore faster arrests. Those hopes came to fruition not only over the weekend, but last month when two suspects were caught using Green Light Project images the day after carjacking a man at gunpoint.