MantisX uses gyroscope motion detectors, computer software, and apps to provide you with expert coaching. Through the magic of technology, that I have no way of explaining on my own, the device records and analyzes every shot you make on your firearm.

When I received a MantisX as a gift, I was a bit perplexed as to what this little black-box device packaged in its own Pelican Micro Case was supposed to do, I was skeptical.  A year later I am still using the MantisX and I’m still impressed with how it performs.  Attach the device, connect the phone or tablet, collect the data; it’s that easy.  It is an FM (freaking magic) powered device.

The rechargeable (via a USB port) battery sensor attaches to your firearm of choice by way of a Picatinny rail interface.  They now also offer attachments for the bottom of your pistols magazine. You turn the device on and synchronize it to your iOS or Android-based device and watch the magic happen.

According to MantisX, the sensor measures and memorizes the movements of the firearm on a hypothetical cartesian plane (yeah, I still don’t know what or how it’s doing this wonderful magic either other than math.)  The MantisX system takes this data and assigns a score to each shot.  It then translates all this (magical) data to your handheld device via Bluetooth and turns it into useable feedback.  It’s like a highly skilled firearms instructor in a case that is much easier to carry around with you.

The aspect of this device that I found to be the most useful was the way it returned the data to me on the app for correcting my errors.  It was a bit spooky to see how accurate the reading of the target on the screen compared to my actual shots on the paper were!  The app provided me accurate real-time feedback on what I did during the shot that caused a miss and what I could do to correct the error.

One of the beauties of this device is its usefulness in dry-fire practice.  You can use it on a regular firearm and conduct dry-fire training with it or even install the little black box on your SIRT, training pistol and take your training to another level.  Most great shooters spend the majority of their training time doing dry-fire practice! 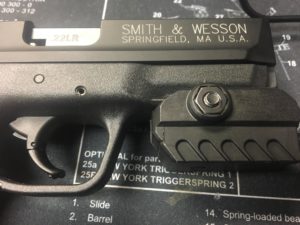 Another great application of this tool is for instructors.  If you have a shooter that is struggling and/or you’re struggling with diagnosis of the errors they’re making, install this device on the gun for the training session and let it record the data for you.  Review the data with the student and allow it to provide hard, data-driven feedback, which is personalized to them of what they are doing with the mechanics of the shot.

The system will provide the shooter data-driven suggestions (and a second voice other than yours) of what is going wrong!  Simply attach the device to the shooters gun, go into the app settings, and make sure that the setting of pistol or rifle and left or right hand etc. are all correctly selected and you are in business.

Having a problem shooter that you want to go home and do dry-fire practice but want to ensure that the practice is done and done properly?  Install the MantisX, have them download the app themselves, and send it home with them to practice!  They can save and share the sessions with you, allowing you to see what’s going on when they practice. 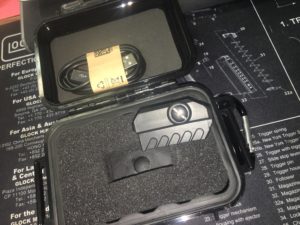 The potential to this device is greater than I first realized, and I look forward to continuing to use it.  It’s a great tool for both the new shooter and the experienced/skilled shooter.

If I had the ear of the manufacturer of this product, I would only suggest they come up with an attachment idea like that of a Streamlight pistol mounted lights for a no tool installation. Get a MantisX, it’s like having an instructor in your pocket only much lighter.

What do you get for your money? It comes with the MantisX smart sensor, MantisX app (for use on your iOS and Android smartphone/tablet that supports Bluetooth 4.0), micro-USB charging cable, 1-year warranty, and it’s Made in the USA.

Heath is a 24-year law enforcement officer in the Great Northwest that has had the opportunity to train as a pistol and rifle instructor and occasionally pretends to know what he’s doing working on pistols and rifles.