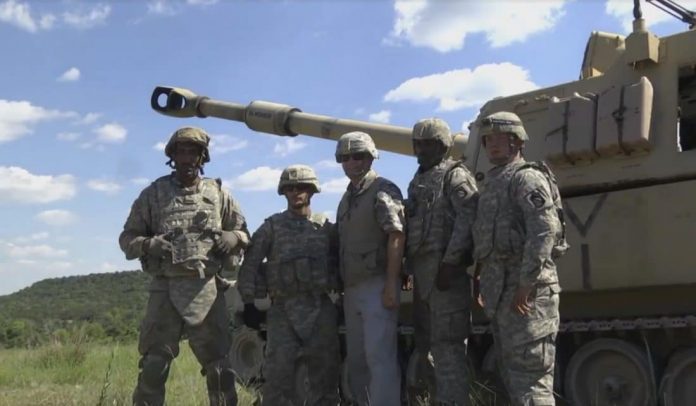 Mississippi’s Gov. Phil Bryant is a staunch Republican that has signed a number of gun reform bills into law and was able to work a M109 while visiting state troops.

Some 3,000 Mississippi Army and Air National Guard are participating in Multi-echelon Integrated Brigade Training at Fort Hood in Texas this month and, while dropping in on the guardsmen, Bryant was able to participate in a live-fire exercise that included loading a M109 self-propelled gun and firing off a round.

“We thank these men and women for protecting us each and every day,” said Bryant in a post to his social media account referencing the visit.

A former sheriff’s deputy, Bryant went on to serve as state auditor and Lt. Governor before winning election in 2011. Since then he has signed legislation to change state laws to codify the right for open carry, slash prices on concealed carry permits, allow for off-body carry in a purse or bag without a license, and protect ammunition from federal government restrictions while vowing to veto anti-gun bills if they ever somehow make it past the GOP-controlled legislature to his desk.

Speaking of desks, when Bryant signed an omnibus bill earlier this year that allowed for stand your ground protections for church security teams and constitutional carry, he did so with his holstered Glock 23, a tattered Bible and a copy of the Reagan Diaries on his desk.

The Mississippi Army National Guard is home to the 155th Armored Brigade Combat Team “Dixie Thunder” which has deployed as a brigade to Iraq three times since 2002 and traces its lineage back to 1798.

In the wake of the terrorist attack on the Chattanooga Naval Reserve Center, Bryant issued an executive order to arm Mississippi Guard personnel at Community Readiness Centers and recruiting offices.