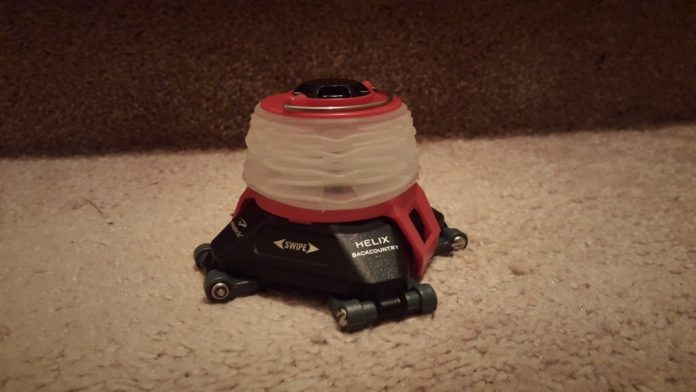 It’s always nice to have some type of creature comforts when we are out in the forest on an extended camping or hiking trip. As far as lights go, I have usually kept a small flashlight or chemlight handy. With the Helix Backcountry LED Lantern from Princeton Tec, you can have light anywhere you want, anytime you need it.

To start, the Helix is a collapsible lantern that uses LED technology in order to provide up to 150 lumens of white light. A dimmer switch allows you to take it down to 30 lumens for the times you don’t need as much. The Helix can also operate in a red light mode to allow for low profile use. This is very handy if you need light, but you don’t want to wake the rest of your camping party. Most lanterns on the market currently only offer white light and very little choice in controlling the brightness and direction.

Starting at the top, the Helix has a metal hook that can be used for hanging the lantern in any vertical configuration. You could hang it from a rope outside, within your tent, or on a carabiner attached to your pack. Below the hook is the collapsible globe which gives the user the option to store it compactly. A neat feature is a phosphorescent material that the globe is made of, which glows in the dark after the light has been turned on.

To close the globe, you push the globe to one side and roll it to the opposite side to lock. Pulling up from the locked side will release the globe back into its open configuration. Although it sounds easy, it took me a couple tries to get it figured out just right. Below the globe is the control surface, which is swipe-activated and gives you the option to change-up the functions.

To make it user-friendly, the Helix has the instructions printed on the bottom side of the unit. Swiping left to right operates the white light. Another swipe turns it to medium, and a third swipe turns on the strobe feature. Running it from right to left does the same for the red light, with the multiple swipes operating it the same way as the white. Pressing and holding the control surface in either mode will dim the light variably from the lowest to the highest setting, repeating until you remove your finger.

On all four corners of the lantern are sturdy hooks that each operate independently from the rest. With two hooks deployed, you can adjust the angle that you’d like the lantern to project light. With all of them deployed, you can lift the lantern higher, which allows the light to shine farther out. Each hook serves as an attachment point if you wish to hang the lantern from a nail, rope, or other object. There are multiple options for hanging, limited only by the user’s imagination. You could string it 10 feet off the ground from 4 different trees using 550 cord if you really wanted to light up the entire area.

The lantern globe itself can be removed from the LED base, which turns the Helix into a useable flashlight or dome light for a tent. As a rescue tool, the dome light set to the strobe feature would be perfect for signaling rescue teams or aircraft. I’ve tried out multiple lanterns, and it’s safe to say that the Helix is my favorite and also the most versatile. With 3 AAA batteries, the entire lantern weighs 5.5oz.

Rodney Pointer is a former Army Infantryman. After graduating from Airborne School, he was ruthlessly assigned to Fort Polk, Louisiana to live out his days as a dirty leg. He served with the 2nd BN, 30th Infantry of the 4th Brigade, 10th Mountain Division. Following his deployment to Afghanistan, he received a Bachelor’s degree in Intelligence Operations. He currently works as a nuclear security contractor.