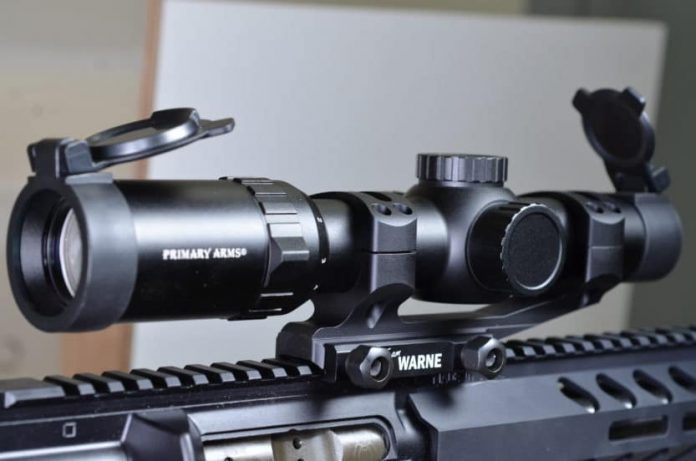 Primary Arms has a history of making great optics that will take almost any abuse you can dish at them and keep running. When you combine ridiculous durability with great custom service and prices its easy to tell why so many of us in the firearms community like the company. I became aware of Primary Arms when RobSki from the AK Operators Union drug one odd their red dot optics behind a truck while attached to a AK74. The optic still held zero and worked after thousands of rounds and repeated trips through the sand tornado and dozens of swimming trips into the local creek.

The new Primary Arms 1x-6x Generation III scope takes the reputation of the companies reliability and build quality and applies it to an optic perfectly suited for both competitive and recreational shooters. There is a lot to like about the much anticipated release of the newest evolution of the 1X-6X, so when we reached out to the company at SHOT Show 2017 and asked if we could get our hands on a production model we were very excited when they said yes. We initially accepted the reply with a wait and see style approach but when the company reached us last week to confirm a shipping address we knew that one was in the mail.

In all the excitement I forgot that I didn’t have any available 30mm scope mounts or rings so after a quick trip to the local Sportsman’s Warehouse I selected the Warne X Skel mount for my project. The Warne X Skel will be featured in it’s own independent article in the near future, but now is not it’s time to shine. Before we dig into setting up and mounting the Primary Arms 1x-6X Gen III scope lets take a look at the impressive list of features that the team at Primary Arms managed to fit into this scope and why so many people have been waiting for it to finally hit the market.

I had originally thought of mounting the optic to my 10.5″ Noveske Short Barrel Rifle, but decided against that idea. If I am to test this Primary Arms 1X-6X optic out to 300 yards or longer I needed to be sure to use a 16″ barreled AR-15. I wanted to be 100% sure than my rifle would be able to accurately reach out to that distance and I didn’t want to have any variables with an SBR style set up. Since I am also testing the ACSS Reticle that I am also not very familiar with my plan is to bring along an friend of mine who is a Operation Iraqi Freedom Veteran formerly of the 172nd Stryker Brigade Combat Team who is a much better marksman than I am.

My first impression of the Primary Arms 1X-6X scope is that it ships in a large box and barely fit in my tiny mailbox. This isn’t a knock on Primary Arms as it is against the United States Postal Service for giving us such small mail boxes. The scope arrive undamaged and I tore into the box to get my hands on it. The first thing I noticed about the scope is how large it was compared to my other optics. I haven’t owned anything except Eotech and Trijicon optics up till this point. The finish that Primary Arms selected for this new scope was a nice even deep black and looked to be applied evenly, no clumps, bubbles or thin spots where seen anywhere on the scope.

Despite the size of the optic I didn’t think it was heavy at all, I know that with it mounted to the test rifle using the Warne one piece base and mount set up that it would weigh a little more but I didn’t feel it would be excessive. The plan is to start shooting the rifle from a bench with sandbags as a rest so overall weight isn’t a concern. I will say that it was when I was checking the finish I noticed the dual flip caps that Primary Arms includes with this scope. I completely looked past them at first, but once I noticed them I open and closed each of  them several times each. The caps function like every other scope cap I’ve seen that is on the market but it’s a nice touch for the folks at Primary Arms to included them with the scope.

I was pleased with how easy the reticle is to pick up even when it’s unlit. The ACSS set up is clean, clear and more natural to use than I thought. My Nikon D7000 and 60mm Macro lens distorted the images a bit at the bottom of the pictures but I assure you the reticle, both lit and unlit is clear and crisp. The Images I took were with the optic set at the 1X magnification setting, the position I will use it the most, knowing my shooting style. When I clicked through the illumination settings I noticed that the settings six through nice were best for me. Positions ten and eleven were bright but not bright enough to cause any eye fatigue or glare.

The adjustment control on the Primary Arms 1X-6X moved through it’s entire range of motion with a noticeable amount of pressure. I think the idea behind the amount of force needed to move the lever is to make sure that the user is consciously adjusting the magnification. The adjustment dial features a even spacing on the texture dial. If a user wanted to make the magnification adjustment easier they could install a device like the Warne Throw Lever to give the user a bit more mechanical advantage. If I had to guess though I would be willing to bet that the dial will loosen up some with repeated use.

The plan for this scope is to begin winter testing here in Alaska and see how the Primary Arms 1X-6X Generation III holds up to exposure to the cold. Usually an Alaskan Winter this time of year is beginning to warm up, but thankfully we have had a cold snap and had several days of sub zero temperatures. These temperatures usually are a reason to be angry and complain about Springtime, but this year I welcome the slightly longer colder winter. I plan on zeroing the scope using a 25 meter standard zero target then start at 25 yards and move my way slowly out to a distance of 300 yards. The target we will be using is a Defense Targets RST 3/8″ AR500 steel target. There are a few reasons I chose this target for the tests, first I don’t have to change paper during the test. Secondly and most importantly, a steel target provides instant feedback to register hits or misses.

The world of variable magnified optics that offers a user a Close Quarters Battle (CQB) reticle while still providing the flexibility to engage targets at longer ranges is growing everyday. The usual suspects of Leupold, Vortex, Bushnell and others now find themselves fighting for a limited amount of dollars in the firearms market against more affordable optics like the Primary Arms 1x-6x. It use to be that limited companies offered consumers similar types of lifetime warranties and quality assurance, that is no longer the case. In my experience everything that has the Primary Arms logo on it is the same quality as more popular brands, in many cases the only difference in price. I expect this scope will be built as tough as any other Primary Arms optics.

What are your thoughts on the Primary Arms 1x-6x Generation III ACSS scope ? Do you think it will hold up as well as it’s competitors ? If you are a user of the older generations of the Primary Arms 1X-6X we want to hear from you, how are your optics holding up. In the near future we plan to review a few more Primary Arms optics and possibly toss one in the upcoming 10,000 Facebook Likes giveaway.