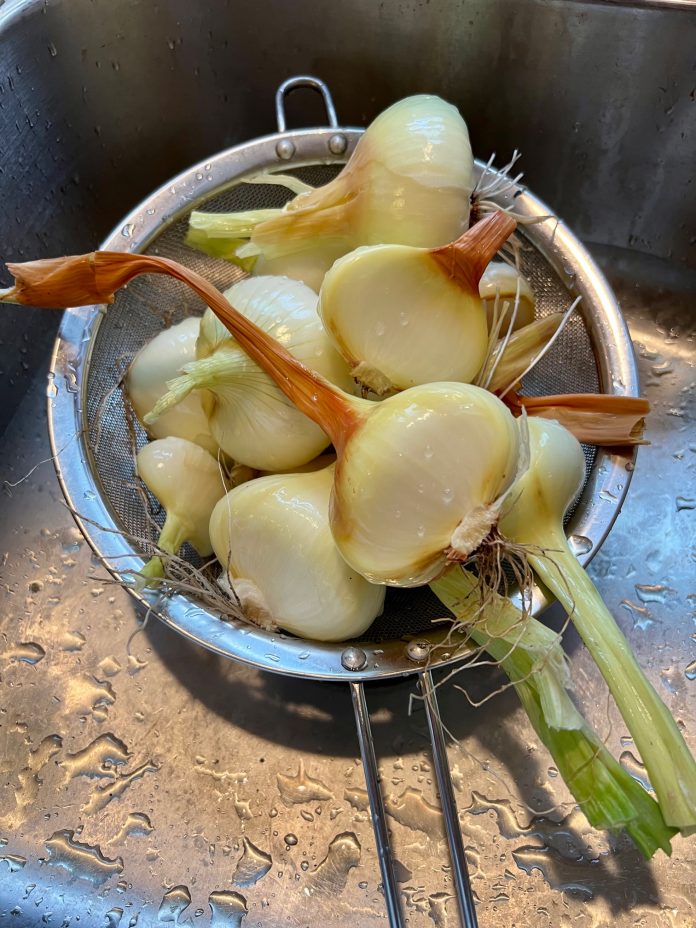 Remember when I talked about running out of onions last year? Well this year I tried some new things and planted more, and yeah well now I’m up to my eyeballs in onions!

The first thing I tried – growing “bunching onions” in the window – never really took off. I got a few spindly stalks but not enough to do more than chop a few greens into a recipe. I was disappointed, but soldiered on.

And by soldiering on I mean that I went crazy in the planting onions outside department. It was more of an accident or an insurance policy than actively TRYING to overwhelm myself with alliums, but here we are nonetheless.

I had never grown onions from seed before, I’d only grown from “sets” from the store. Trying to be more self-sufficient I decided to try seeds this year. The variety I chose – Walla Walla – is a sweet northern onion, but it has a rather long growing season so I started those seeds in several egg cartons in my window in fricken January. I’m not kidding, it’s right there in my garden journal. And by starting seeds, I mean I planted ALL the seeds. Every single seed in the packet went into my window. Because when you have the winter blahs and are desperate to see greenery, and know that some seeds never germinate, you way over-plant just in hopes of getting SOMEthing.

Fortunately I got lots of somethings. Those seeds apparently really like egg cartons because I had something like a 80% germination rate. I babied those little onions and they flourished in my window for two months. Onions are supposed to be very frost tolerant so I then transplanted the few dozen -odd seedlings outside into one of the survival/inflation garden raised beds on March 19th.

There’s frost-tolerant and then there’s really fricken brrrr. We had a pretty deep cold snap a few weeks later and my baby onions looked pretty droopy. I was worried. So when the local farm store chain advertised that they had onion sets in stock I scooted on over to have a look. They didn’t have sweet onion sets, but they had yellow and they had red.

“Oooooh, I’ve never grown red onions before, that might be fun”, whispered my garden addiction to myself. So that is how I came to have not just one, not just two, but three different varieties of onions growing in my garden. Because naturally since I bought more, my original planting survived and did well. And so it went until July.

You know it’s time to harvest the onions when their green tops droop over. Whereupon you are supposed to pull them up and lay them out to dry so that the tops turn brown. This allows the onion bulbs to seal over so to speak, and then and only then can you store them for a few months or all winter. It’s a bit of a process.

So naturally as soon as I started to pull onions to dry, the weather decided to be stormy off and on nearly every day for three weeks. Onions don’t “dry” in the rain (duh) so I had to bring as many as I could into the house. For almost a month I have had onions draped over every conceivable surface in my kitchen. I still had to leave some outside, but as I processed them I brought more indoors as I went.

Some dried perfectly, got topped and tailed and are now hanging in my basement tied into old pantyhose. Yes, I am of the generation that wore pantyhose and yes I still have some in my drawer – get off my lawn and don’t judge. Some of the dry ones I put into saved plastic netting from my last few frozen turkeys. (I am not a hoarder.)

Then there was the problem of the fact that some didn’t dry at ALL. Some were threatening to get soft and rotten because of the rain. Assuming my controlling mother attitude of “Oh no you DON’T!”, I marched those onions over to the cutting board and started chopping them for dehydrating before they went bad.

Which was a good idea and frugal on my part, except for the fact that these yellow onions were a bit more pungent than the ones I dehydrated last year. Two dehydrator batches of several trays each, over the course of two and a half days made my house smell like a Philly Cheese Steak Shop – except stronger. Not only did my eyes water while I was chopping those rogue onions, It was pretty bad in the house for three days too. I could smell onions all day at work for two days as well, so it was undoubtedly in my clothes and up my nostrils. But I at least have three jars full of dehydrated onions for winter soups and cooking to show for my suffering.

I could have put the dehydrator outside on the picnic table like I did for the jalapeños the other year, except the same rain that wasn’t allowing the onions to dry properly also impeded my use of an electric appliance outdoors on an uncovered deck. ARGH.

There are still a few onions left which aren’t drying well, so I’ll be using those up in canning some salsa this weekend. Whatever STILL isn’t dry might have to go into another dehydrator load. Next time I think I’ll try putting it all on a folding table in the garage.

I also have plans for some of the red ones to go into home pressure-canned French Onion Soup. This is a shelf stable and delicious way to preserve garden onions. You don’t have to eat it as soup, although I love it with salad croutons and melted cheese. Some people use it to cook their pot roast in or make Salisbury steak with. There are all kinds of possibilities if you are an onion lover like me.

There’s one last thing I want to experiment with. I have read that if you slice the onions (instead of chopping) and then blanch them before dehydrating (instead of doing them raw) that you end up with  crispy onion ring snacks to eat right out of the jar! I definitely NEED to try this.

Yeah I love onions. I am up to my eyeballs currently, but I’ve got plans for every single one of them. I suppose there are worse things to have your house smell of in exchange for a winter of yumminess. Just don’t stand too close or smell my clothes for a few more weeks, mkay?