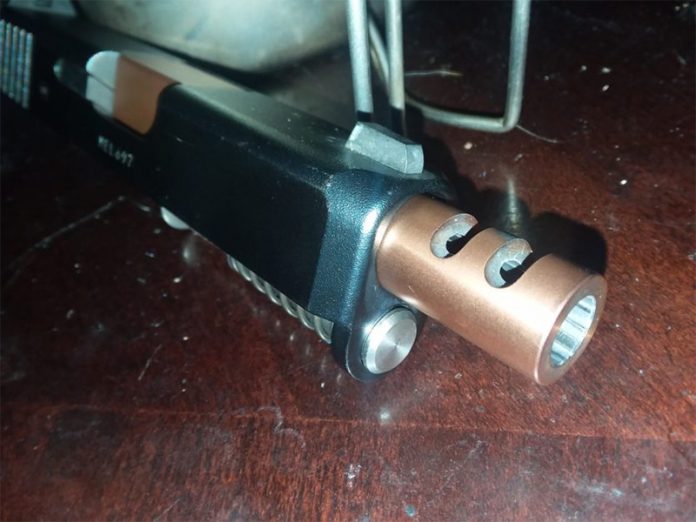 The trend of utilizing compensators and ported barrels on an everyday carry handgun has slowly made its way into the tactical shooting community from the competition community. While the addition of either of these features is not a must for a functional carry gun, they substantially improve the recoil management of the pistol by dampening muzzle rise through the redirection of the expanding gasses leaving the barrel. This, in turn, makes the gun shoot flatter and allows the shooter to deliver follow-up shots on target faster generally speaking.

A variety of company’s produce ported barrels or compensator attachments designed for pistols, they vary in price but are more often than not upwards of $100 when it comes to a quality compensator and closer to $160 and up for a ported barrel. They are also available in almost every caliber but availability will drastically change from pistol to pistol since aftermarket parts often favor more popular models. As previously stated, the primary benefit of a compensated gun is faster shooting (while still maintaining an acceptable level of accuracy). Faster follow-up shots give the shooter the potential for increased lethality; the faster the rounds find their mark, the faster the target goes down provided you hit the right things on the human body. Of course, the quickest way to drop a threat is through the “T-Box” (an area on the human head) destroying the brain stem and causing instant death. This is a small target though and since we should be training to shoot center of mass, more bullets faster into the center is a positive.

Compensated barrels are not for everyone and have their drawbacks as well. For instance, they produce a large muzzle signature and a powerful concussive blast is sent out horizontal or vertical from the muzzle. At night this creates a massive fireball and if you’re using a ported barrel like I am, it can obstruct your sights and wreck your natural night vision (possibly more so than a standard muzzle flash). There have been reports of compensated pistols jamming when fired from retention too, I have not had this problem but maybe it’s a thing to be wary of. The big one is they are expensive and honestly for most people, they are not going to make a big enough difference to warrant the price-tag.

Compensating or porting a handgun is cool and a fun and effective way to get more out of your shooting. Just be sure to consider its use and why you want to do it, if the good out weights the bad then it may be worth checking out. So far I have really enjoyed my ported barrel and my follow-up shots have gotten faster while my groups have remained tight as far as a minute of man goes. You can check out some video of me shooting my ported Glock 26 9mm below.

Originally published on SOFREP and written by KURT T