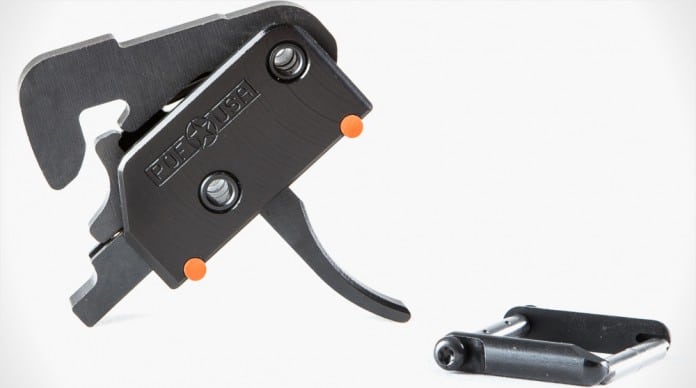 The Patriot Ordnance Factory has a new drop-in Combat single-stage, non-adjustable trigger. The Combat trigger is slightly heavier than the company’s standard triggers for rough-and-tumble shooting where lighter triggers are less welcome.

The Combat trigger breaks at 5.5 pounds, unlike the other drop in triggers which break in the 4- to 4.5-pound range. But it has all the other enhancements to ensure above-average predictability in the break to promote accuracy even with the MIL-SPEC-territory trigger pull weight.

Outfitted with hand-fit KNS anti-walk pins and riding on four urethane feet, the drop-in fire control group is braced in position that ensures all the trigger components lock together consistently, always along the same wear paths. This eliminates small variations that can throw off a shooter when precision shots count.

Like other POF trigger packs the hammer, disconnect and trigger are cut from A2 tool steel and treated with a hard, corrosion-resistant nitride finish. The fire control group is housed in a machined aluminum housing with a hard-anodized finish.

POF lists the new Combat trigger at $199 and it is available for sale directly on POF’s web store. If you can wait it will probably be available from other retailers for a little less.

The POF is best-known for a hard-use piston-driven AR-style rifles but the company is breaking out as a solid builder of AR accessories for shooters everywhere. Just recently they dropped an adjustable 9-position direct-impingement gas system based on their piston regulator that’s turning heads.

These trigger packs are a simple way to go from a rough parts kit trigger to a tuned performance trigger without a gunsmith install.