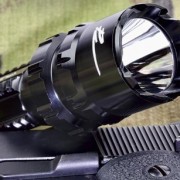 PK aka Paul Kim, is the brainchild of many of SureFire’s flashlights when he was VP of Engineering at SureFire. Now he has a new light, the FL2 LE. The FL2 LE is similar in size to the traditional SureFire 6P. It is a 2 cell light powered by 2x CR123 batteries. SureFire has their […]