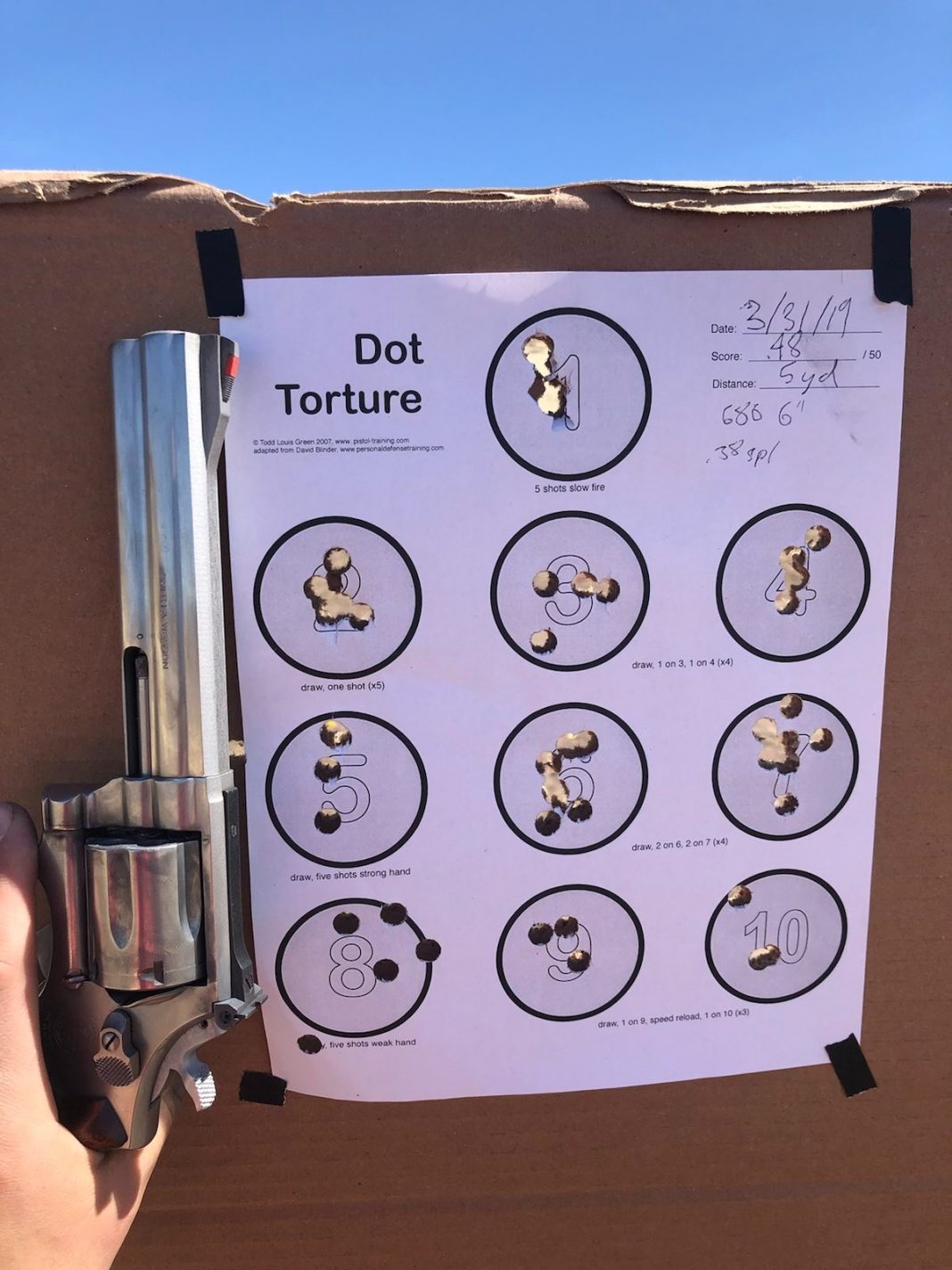 Like the 3×5 Card Drill I’ve written about previously, the Dot Torture Drill has been and continues to be one of my pistol training staples. This classic drill challenges even seasoned handgun shooters as letting one’s guard down means even easy shots will be missed. Negotiating Dot Torture successfully requires an absolute focus on every fundamental aspect of handgun shooting, and this is what makes it a great skill builder.

During my early days, I definitely leaned on this drill in order to build a modicum of handgun accuracy. Personally, I also really appreciate the fact that it makes the shooter shoot single-handed only with both hands on #5 and #8. While it may be daunting to shoot especially at #8, one is a better shooter for having done so. The Dot Torture target was designed to be printed on a standard 8 ½ by 11-inch sheet of printer paper. It features 10 different 2-inch circles that are numbered 1 through 10 accordingly. The point of the exercises is to shoot at each circle according to the instructions, which are conveniently printed underneath each circle on the sheet. The drill is intended to be shot at three yards with no time limit. The only requirement is to not miss. Ideally, at three yards, all shots are touching and one is shooting cloverleaf groups. Some shooters like to shoot it at other distances and some may even add time constraints to make it more interesting. This is purely optional and is not part of the drill, however.

Shooting this drill only requires 50 rounds, or one standard sized box of pistol cartridges. And just like the 3×5 Card Drill, Dot Torture is another simple and straightforward shooting exercise with low overhead that can be set up virtually anywhere, including indoor ranges. Ideally, the shooter starts from their holster. This would be an excellent way to work drawing repetitions, but drawing from the holster is not a requirement nor is it the main point of Dot Torture. Using a low compressed ready is not unreasonable when shooting Dot Torture at any public firing range that does not allow holster work.   While I love shooting Dot Torture, and I have probably shot thousands of rounds trying to clean it, I want to warn readers from falling into a trap and over-relying on it. I think that I’ve wasted a good amount of time and money trying to get a perfect score of 50 at 5 yards when I was consistently printing scores ranging from 47-49 on demand. In hindsight I think I could have better spent some of that time shooting other drills or dry-firing. Dot Torture is a great assessment and will keep anyone on their toes, but it is not an end-all be all to pistol skills.

Click here for a printer-friendly PDF version of the Dot Torture target.

And here for the TDA version.