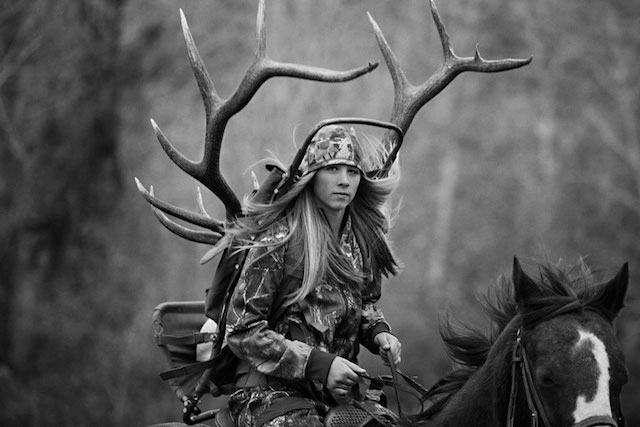 After years as a successful wedding photographer, Hillary Maybery decided to challenge herself to something new and tackle the fashion industry, but while searching for a teen model, her journey took an unexpected turn that eventually chipped away at her preconceived notions about hunters, which she once viewed as “barbaric, blood thirsty, gun lovers.”

Maybery was intrigued when she came across photos of 15-year-old Harlee and her father, Bryan, standing over a massive 12-point elk, Harlee’s first, which she had dropped from about 350 yards away with a clean shot to the shoulder.

Maybery contacted Harlee and, with permission from her father, set out to do a photo shoot with the father-daughter team. In the end, Mayberry had a portfolio of beautiful photographs and a new understanding of the sport.

Hunting has nothing to do with violence or aggression. It’s a little like farming or gardening. People protect and care for their chickens and their vegetable plants, only to end up using them for food. Also, hunters support conservation of wild places and laws that protect wildlife populations. What I learned with Harlee’s family is that they want to know where their food comes from, have clean lean meat, they eat the whole animal, and share the meat with friends and family. I still would never be a hunter, but my perspective has shifted and learned hunters are more knowledgeable and thoughtful about animals and nature. It was a great morning!