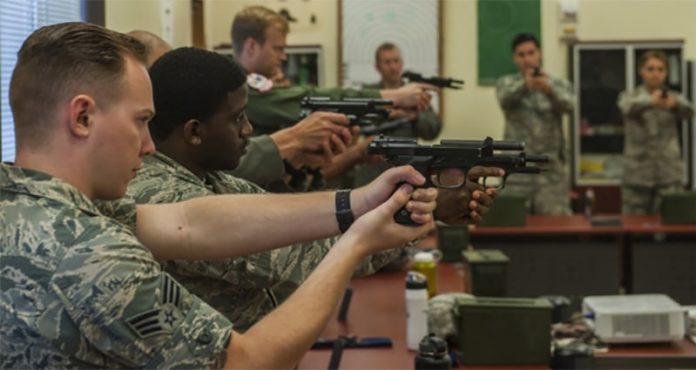 The Department of Defense last week issued an extensive directive that would allow some to carry a privately owned firearm on DoD property for personal protection.

The move comes more than a year since five U.S. Marines, a sailor and a Chattanooga police officer were shot as part of a terrorist attack that began at U.S. Navy Recruiting office and ended at a Reserve Center in that Tennessee city. While several governors moved to allow their National Guardsmen and other military personnel to carry guns at state-run military facilities and made efforts to arrange for free concealed carry training and expedited permits, the federal government until this month has only replied with more active shooter training and narrowly focused programs to arm selected personnel on base.

The new directive provides that local company grade unit commanders or equivalent can authorize that DoD personnel “may be armed on and off DoD property when required for the performance of official duties,” and that “personnel may request permission to carry a privately owned firearm on DoD property for personal protection purposes that are not related to the performance of official duties or duty status.”

For personal firearms, authorizations can only be for 90-day increments but could be “renewed for as long as the threat or circumstance necessitating arming exists.” Further, they would be restricted to DoD personnel 21 years of age or older, citing that “Many States require an individual to be at least 21 years of age to own a firearm.”

This age requirement would eliminate the Second Amendment rights of many who serve. According to military surveys, over 100,000 in uniform across the active and reserve components are teens aged 17-19 while as much as 30 percent of all enlisted Marines are under age 21.

President-elect Trump has been outspoken on dropping gun free zones on the nation’s military bases.

“Banning our military from carrying firearms on bases and at recruiting centers is ridiculous,” Trump said in his official Second Amendment platform. “We train our military how to safely and responsibly use firearms, but our current policies leave them defenseless. To make America great again, we need a strong military. To have a strong military, we need to allow them to defend themselves.”

Some veterans advocates found the new directive to be a step in the right direction, but was still overly cautious as it  relies on the authorization of local commanders who could be disinclined, and is only for 90-day increments.

“If you are in the military and have a concealed carry permit valid for the state you are in, then you should be allowed to carry going to/from work, and while at work as long as no physical, tactical or other type of training is being conducted,” said Steve Reichert, a Marine veteran and tactical trainer. “If training is being conducted by a unit, there should be a designated service member who’s only job during said training event is force protection. He/She should have the ability to deliver lethal force in an instant should it be required.”

Reichert’s words were echoed by Medal of Honor recipient Dakota Meyer who said, “We can’t expect our service members to put their lives on the line while overseas, and only while overseas allow them the ability to protect themselves no matter where they are. Upon returning to the states that ability is stripped away.”