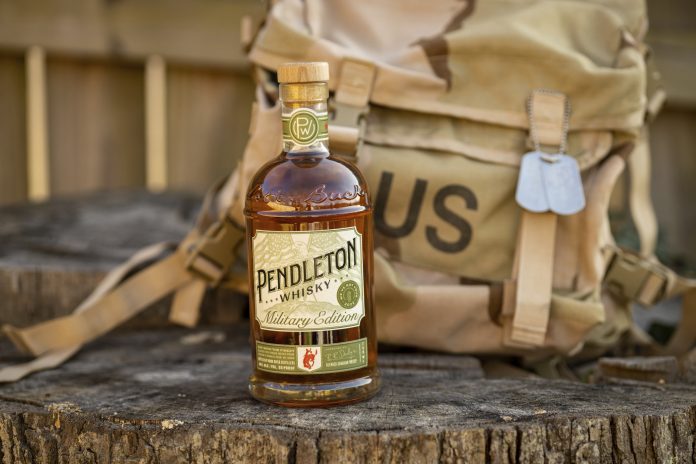 In a previous article we talked about the origin of Pendleton Whisky. Created to fully envelop the American West. Now, we focus on giving back to a group of people who often exhibit the same ideals and culture as those in the American West, our Military men and women.

Pendleton Whisky continues a strong tradition of celebrating veterans with a limited-edition military bottle released on Armed Forces Day and a $100,000 donation to the Bob Woodruff Foundation.

HOOD RIVER, OR, May 21, 2022–Pendleton Whisky, the iconic Western whisky brand, continues a tradition of standing with veterans from the United States Armed Forces by releasing the fourth iteration of the limited-edition military appreciation bottle. Born in the iconic western town of Pendleton, Oregon, and named for the revered Pendleton Round-Up rodeo, Pendleton Whisky celebrates the spirit of the American cowboy and is committed to supporting both United States veterans and the great country they protect.

In addition to the limited-edition bottle, Pendleton is committed to a $100,000 donation through the proceeds of sales to the Bob Woodruff Foundation. An organization dedicated to helping service members, veterans, and their families create healthy, positive futures. The Oregon-based whisky brand will release a limited run of the Military Appreciation bottles that will feature military embellishments including the common military term, “Got Your Six,” which means “we’ve got your back.” Each bottle will be filled with Pendleton Whisky’s Original whisky which features glacier-fed sprig water from Mt. Hood, Oregon’s tallest peak, giving it an uncommonly smooth taste and rich, complex flavor.“ Pendleton Whisky’s military appreciation bottle showcases the brand’s commitment and homage to U.S. Armed Forces and their families across the country,” said Bob Woodruff Foundation CEO
Anne Marie Dougherty. “We are proud to continue this long-standing relationship with Pendleton and work with them to support military veterans and their families through a variety of challenges.

“Serve One Forward” On Memorial Day

”In addition to the limited-edition bottle and commitment to the Bob Woodruff Foundation, Pendleton will be launching the “Serve One Forward” campaign that will allow people to join Pendleton in giving back to veterans of the United States Armed Forces by purchasing a drink for active duty or retired service members at select bars across the country from Memorial Day through Labor Day. Purchased drinks will be displayed via tear sheets and veterans will have the opportunity to thank the person who ‘served one forward’ via Instagram. Check with your local bar to see if they will be participating. The Pendleton Whisky Military Appreciation bottle will be available at retailers.

Donations can be made to the Bob Woodruff Foundation at pendletonwhisky.com/WGY6.

About the Bob Woodruff Foundation

The Bob Woodruff Foundation (BWF) was founded in 2006 after reporter Bob Woodruff was wounded by a roadside bomb while covering the war in Iraq. Since then, BWF has led an enduring call to action for people to stand up for heroes and meet the emerging and long-term needs of today’s veterans, including suicide prevention, mental health, caregiver support, and food insecurity. To date, BWF has invested over $85million to Find, Fund and Shape™ programs that have empowered impacted veterans, service members, and their family members, across the nation, reinforcing the message that BWF has ‘Got Your Six’.

Two Service Members Who Were Impacted by the Bob Woodruff Foundation

Brandon Davis served 8 years as an Army infantryman during Operation Iraqi Freedom. He reenlisted after struggling to make the transition back to civilian life following his first deployment, and suffered a traumatic brain injury (TBI) during his second tour.

Retired U.S. Marine Corps Staff Sergeant, Brad Lang, received a Purple Heart after sustaining an injury resulting in the loss of both his legs during a 2011 Tour of Duty in Afghanistan.

To Buy a Bottle and Learn More

Pendleton Whisky is now available in store to purchase. Who has made an impact on your life that has served? Who may have lost someone close to them that doesn’t want to be alone this Memorial Day? Who could you yourself pour some out for..In this industry especially we have many men and women that have given it all for our Country. Give back to them.