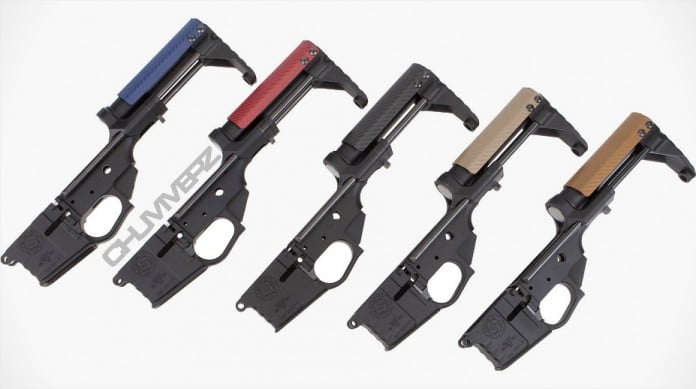 Cross Machine Tool and Battle Arms Development have expanded their integrally-stocked PDW lower for short-barreled rifles or SBRs, into a series with four new models, each with a different color carbon fiber cheek piece. The UHP15PDW is now available in coyote brown, flat dark earth, blue, red and of course, black.

Machined to be as short as possible, the UHP15PDW lowers are fit with a retractable buttstock mounted on telescoping rods with aluminum buttplates. Unlike similar designs and wire stocks this has a minimalist cheek piece that provides just enough of a cheek weld to give you a solid, repeatable sight picture.

The stock has four positions with a centrally-located catch housed under the buffer assembly. The steel bars, along with the rest of the small parts, has a matte black nitride finish. The rest of the lower is CNC machined from 7075-T6 billet aluminum with a MIL-SPEC hard anodized finish. The magazine well is precision wire EDM cut and has a drop free guarantee with USGI and Magpul magazines.

All this combined with the lower’s compatibility with standard bolt carrier groups is making it one of the rising stars among the AR-15 PDW options. The UHP15PDW uses a proprietary buffer system with a stumpy 3.3-ounce tungsten buffer and custom recoil spring, but otherwise works with standard AR-15 uppers and most lower components.

These lower receivers offered in the same “halfway” complete configuration including the stock assembly and buffer system along with a left-side mag release button and right side bolt catch and integral trigger guard. Together with an off-the-shelf magazine catch and bolt hold open provide ambidextrous controls.

Other parts not included are the grip, safety selector, takedown pins and fire control group. These are all components a lot of people buying UHP15PDWs are likely to replace anyway. Assembled the UHP15PDW weighs 2 pounds, 4 ounces, only a couple of ounces more than a regular lower with A2 parts.

The only tough pill to swallow is the price tag. Available from Rainier Arms for $625, these lowers cost a couple hundred more than conventional forged or even billet lowers, but then these aren’t conventional receivers by any standards.

With the ambidextrous features, quality of construction and of course, ultra-compact stock and buffer assembly included, the UHP15PDW is worth consideration for anyone looking to build a compact rifle or PDW-style SBR.