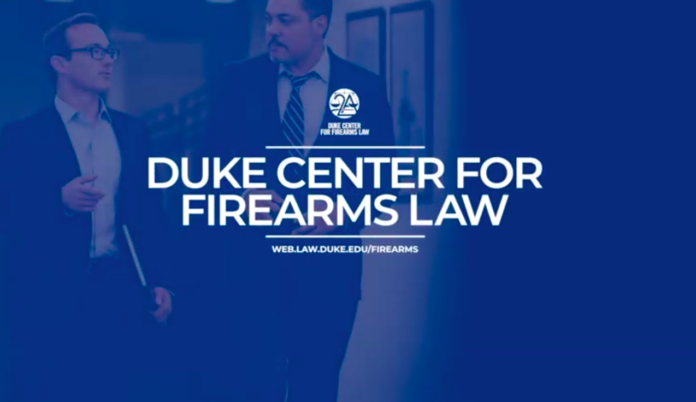 [Ed: This was first published July 18 on TheTruthAboutGuns. Edited for DRGO.]

The Duke Center for Firearms Law is publishing a series of papers on corpus linguistics and the Second Amendment. Corpus linguistics is the search for and study of words and phrases in their context to discover their original public meaning.

Much of what I’ve read so far will receive a hostile reception from TTAG readers. Nevertheless, it’s useful reading so as to understand what we should expect to be up against in the courts in the future.

As one example, I call attention to the snippet below from Neal Goldfarb’s abstruse “Regarding the Strength of the Corpus Evidence (and Noting Issues that the Evidence Doesn’t Resolve)”. The gist is the substantial body of corpus evidence that the phrase “bear arms” was used predominantly in a military sense, not in any civilian context such as for self-defense. I’m prepared to stipulate to this.

Nevertheless, I have a different view of the militia prefatory clause and the corpus evidence that “keep and bear arms” being used predominantly in a military context. I hold that the liberty to own arms kept on one’s property and to carry them off that property existed in some hierarchy of concerns. Each individual might have held his own construction. A subsistence hunter would hold the purpose of hunting higher than pest control, a grain farmer the reverse.

In any case, the Constitution’s drafters had their respective hierarchies, where I presume hunting and pest control would be relatively low on the list and the relationship of arms to the crown would have been paramount.

Moreover, the role of the federal Constitution was to fix the relationship of the new Constitution vis a vis the states and the people. The enumerated powers doctrine and the “police power” vested in the states make it clear that no one drafting, editing, and reading the Second Amendment was particularly concerned with hunting or pest control. These were state domain issues.

If you subscribe to my hierarchy of concerns, then I invite you to consider that the highest of these concerns would have subsumed all the subordinate concerns. That is, if we are to read the Second Amendment to guarantee the right of the people to keep and bear arms for the security of a free state, it also served to guarantee that right for all lesser purposes such as hunting, pest control, etc.

The troublesome snippet reads as follows:

“. . . the state provisions are inconclusive because in each such provision, ‘bear arms’ was modified by a prepositional phrase that has no analogue in the Second Amendment:

– bear arms for the defence of themselves and the state

– bear arms, in defense of himself and the state

– bear arms in defense of themselves and the State”

It seems to me that it’s inappropriate to assume that the use of ‘bear arms’ without any modification would have been understood in the same way as the use of the phrase as modified in the state provisions.

“The right of the citizens to bear arms, in defense of themselves and the state, shall not be questioned.”

And then they went on to read the proposed Second Amendment to the Federal Constitution:

“. . . the right of the People to keep and bear arms [no prepositional phrase here] shall not be infringed.”

These Pennsylvanian yeomen immediately wrote to their delegates to the ratifying convention as follows:

“In contemplating the proposed 2A you should not understand that the use of ‘bear arms’ without any modification as guaranteeing a federal right to self defense.”

The typical yeoman’s daily life included pest control, hunting, marksmanship development and demonstration, along with regular occasion to contemplate confrontation. Nevertheless, would his exclusive concern, reading the proposed Second Amendment, be to secure his rare exercise of a public militia duty? Did he believe that his right was—exclusively—to serve in the militia?

He recognized no limitation to his personal use of weapons common to his time. It would never have occurred to him that the phrase “right to keep and bear arms” did not include ‘self defense, hunting and all other peaceable and lawful purposes’.

Much of the debate over ratifying the Constitution surrounded the sufficiency of the doctrine of “enumerated powers” counteposed with that of “innumerable rights.” The Anti-Federalists insisted that these doctrines—which the Federalists accepted without question—must be guarded with a Bill of Rights which would enshrine in parchment and ink at least some enumerated rights.

The right to keep and bear arms made the cut. It was among those Madison construed as clouded by not the slightest controversy.

“In fact, much if not all existing Second Amendment scholarship is due for reexamination in light of the corpus evidence. To be more specific, what I think needs to be reexamined is any scholarship that interpreted bear arms as meaning ‘carry weapons’ (whether or not such carrying was thought to be associated with militia service). And that, in turn, probably encompasses a large percentage of Second Amendment scholarship—on both sides of the issue.

“Of course, the necessary adjustments will pose a bigger problem for gun-rights advocates than for their opponents.”

Looking back nearly 270 years, are we to believe that the common public understanding of the yeomen ratifier was that his personal right to weapons was secured only to the extent sufficient to enable him to perform his public duty of militia service? That he had no intention of guaranteeing himself the individual right to weapons useful to him in his private life?

— ‘MarkPA’  is trained in economics, a life-long gun owner, NRA Instructor and Massad Ayoob graduate. He is inspired by our inalienable rights to “life, liberty and the pursuit of happiness” and holds that having the means to defend oneself and one’s community is vital to securing them.