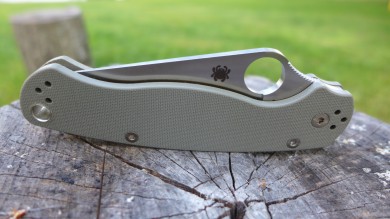 Telling you the Paramilitary 2 is awesome is akin to telling you that the Suzuki Hayabusa is fast. The single word descriptor doesn’t really capture the entirety of what you are dealing with–the Paramilitary 2 (PM2) is something of a phenomenon. It is, bizarrely in this world of gear bounty, hard to find, amazingly capable, and cheap. As the market for $200, $300, and even $400 production knives grows, the PM2 remains intermittently in stock everywhere. There is a reason. It is awesome.

But things get even more incredibly when you throw in the thriving collector’s market around the various Sprint Runs, which I covered here. A new sprint run recently came out, one from the sprint run specialists at BentoBoxShop.com, and it is a sterling example of the knife. If you want a PM2 it’s worth it to chase down a Sprint Run, especially if you can get it at retail. These runs take the knife to the next level. The Elmax version is the third PM2 Sprint Run I have handled and all have been superbly finished. Think of the PM2 Sprint Runs as the Corvette Z06 — a limited edition worth the hassle and price tag.

The PM2 is a medium sized folding knife from Spyderco. It is the second iteration of the Paramilitary, which is, in turn, a smaller version of the large hard use or tactical knife the Military (which is also made in various Sprint Runs). There have been 8 Sprint Run or limited editions of the knife, each with a new, exotic steel. This particular model runs the Boehler Uddeholm steel, Elmax.

Elmax is a powder metallurgy steel with a very high percentage of carbon and ultra pure grain structure. The knife has a full flat grind, and opens with the customary Spyderco hole, though this is the larger 14mm hole (as opposed to the normal 11 or 12mm hole). The knife comes with a 4 way spoon-style clip found on many Spydercos. It uses G10 in the handle and the Elmax model runs foilage green G10. The knife has nested metal liners. It uses a compression lock. The blade is 3.44 inches. The total package weighs 3.75 inches. Because of the nested liners, it is quite thin yet surprisingly rigid. The knife has a half-and-half finger choil.

I carried and used the PM2 mostly outdoors and doing tasks that are right on the edge between what I would use a folder for and tasks were I would use a fixed blade. I did lots of delimbing of oak. We had a tree cut down in the parking lot at work and no one seemed to want these huge piles of beautiful oak, so slowly but surely I loaded it in my car and drove them home (I can only imagine what my coworkers thought of me loading wood in my car in a suit). While processing the wood into burnable pieces I used the PM2 to slice off smaller branches. I even used to hack at stuff. I also used the knife in regular, everyday EDC tasks–food prep, package opening, etc.

In my mind there are two really refined, virtually perfect knives in the Spyderco line up–the PM2 and the Caly3. Both show a degree of thought and attention that even the other superb designs don’t. The PM2 is the clear recipient of studied attention. The nested liners make the knife very thin, easy to carry, and light. But they also make the knife very strong. It is, simply put, an EDC knife that can handle hard use tasks, with the advantages of both and the disadvantages of neither. That is a remarkable feat. The larger than normal thumb hole is greatly appreciated and the half-and-half finger choil gives you a great deal of control over the blade. The compression lock is simply without peer.

Even under heavy thumping, it never budged and it never became sticky. This is truly a brilliant lock design.

First, and foremost, the PM2 feels amazing in the hand. The balance is great and there is plenty of room: The G10 is perfect, truly perfect–not too coarse, not too fine. Cold Steel and a few others could learn lessons here. Additionally, the grind on this PM2, the Sprint Run, is leagues better than the sloppy one on the stock PM2 I reviewed just before the knife went supernova popular. Here is the Sprint Run edge: And here is the stock PM2 edge: It’s hard because of the resolution of my original camera (hence the upgrade), but the area just before the choil on the stock model is simply awful. It’s not just bad looking — it made sharpening the edge very hard. Here the bevel is exceptionally steady and clean. Spyderco needs to give their knives a sharpening choil or true ricasso, but until they do, they need to at least keep the grind steady until the end. On the Elmax PM2, they did and the knife is better for it. I can’t complain about the clip, a standard Spyderco spoon-style number: It works well and is a full four way design.

A word about the steel is probably necessary. Elmax has been surrounded by controversy for a while. This is my fourth Elmax blade and all have been superb performers. I gave my ZT0560 something of a torture test, carving out about a dozen dragon heads and bodies (the bodies didn’t survive the fiery prototyping process) out of very thick cardboard. It cut and cut and cut and still shaved my arm. But until now, all of my Elmax experience has come on ZT knives which, while wonderful, aren’t the best slicers in the world. The Elmax I have used until this knife was durable and frankly just better than S30V. It was easier to sharpen and held an edge at least as long. But I always wondered if it could truly slice when given a very steep bevel angle. The answer is an emphatic yes. This is a steel that can slice with the best of them.

The PM2 is a great knife. The Sprint Runs are very expensive. Hell, the stock model is more than $100. That’s a lot of money for a knife. But compared to other $100 knives the PM2 gives you a ton for your money. The Sprint Runs unquestionably offer superior performance over the stock model, but it is an upgrade only afficionados will appreciate. If value is important, go with the basic model. Even at retail the Sprint Runs are a lot. On the secondary market they are bonkers.

But here is the deal–if you want to see what one of the best knife companies in the world can do with one of their best designs using the best materials–this is it. If I had to take only one knife with me from today until I get buried in the ground, this would be it. It’s a bit big too bust out at the grocery store, but it can do that and live in the forest as well. It can do every exceptionally well, and the sprint run’s increased refinement is much appreciated compared to the stock model. This is a perfect folder. Spyderco, I am breathless.