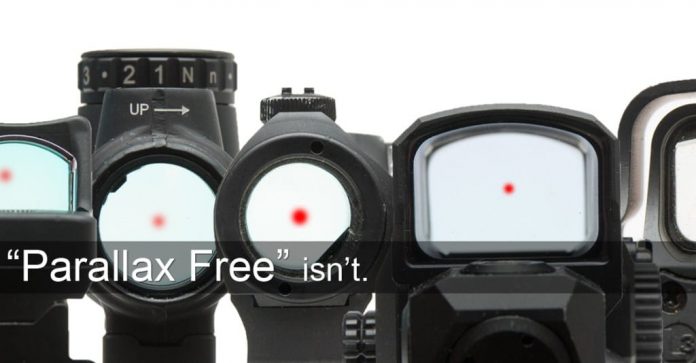 “I really want an MRO, but Trijicon says it has some parallax. Why can’t they make it parallax free like everyone else?”

To be sure, the words “parallax free” have been penned in many a red dot sight (RDS) manual and repeated by just as many product representatives across the board. Today we’ll look into some of those claims, as well as define some terms. Before we go any further we should probably talk about the basics of exactly how a red dot sight works.

By a very large margin, the most common type of red dot is a reflector type. Bear in mind that this explanation will be very general and every manufacturer has their own nuances. Some have multiple lenses, others use different coatings etc., but the following applies to virtually all that you’ll come across.

How It Works
Inside your simple RDS is an LED emitter. This emitter shoots a beam of light at a glass or polymer lens. This lens has been specially treated to reflect red (or sometimes green–thanks China) light back towards the shooter but allow other wavelengths to pass through. The dot that you see when you turn on a RDS is that reflected light. It’s a bit of a different story with the EOtech and other holographic sights [pro tip: if it doesn’t have a laser inside, it’s not a holographic site].

Inside an EOtech is a diode that shoots a laser onto a folding mirror. From there it hits a collimating mirror to align the beam and it’s then directed to a holographic grating. This grating projects the hologram into the window and you see that trademark 65 MOA circle with a 1MOA center dot. As an aside, one of the reasons you’ll never see a holographic sight with the same battery life as LED reflected red dot sights is because it takes significantly more power to run a laser than a simple LED. 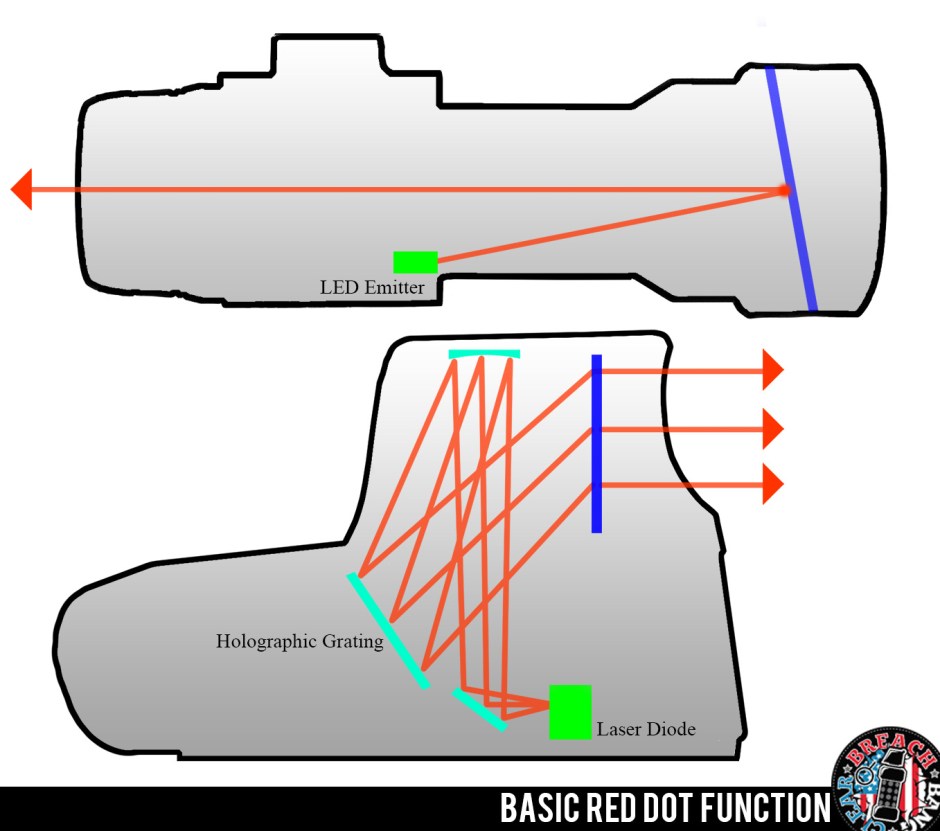 Parallax \ˈpa-rə-ˌlaks\
Merriam-Webster defines parallax as: “the apparent displacement or the difference in apparent direction of an object as seen from two different points not on a straight line with the object“. Astronomers use parallax to determine the distances of celestial bodies by noting the changes in perceived positions of far off objects when the Earth is on opposite sides of the sun. Before the days of GPS and laser range finders, naval vessels could use parallax to determine distances to targets. More practical to your everyday life, the depth perception you gain from having two eyes and binocular vision comes from parallax.

Another effect of parallax is that farther-away objects appear to move slower than they actually are. This is called motion parallax. Driving in the countryside provides ample examples. When you’re driving down a road, the fence posts will rip right by while a house or hills in the distance seem to meander alongside.

This is all fine and good, but what it means to a shooter is that under certain conditions the dot will appear to be someplace it isn’t. That isn’t good and can mean missed shots.

Although the dot you’re seeing is just a reflection off of the front of your sight (or projected onto a lens in the case of an EOtech), it’s actually focused at a much further distance. Since you can see through the glass, the dot appears to hover on top of your target. Many manufacturers claim that their dots are focused at infinity. Now we know infinity to mean limitless or endless but optically it means that the dot appears to be projected at a very long distance called the vanishing point.

Imagine you’re looking down a straight length of train tracks. Even though the two rails are parallel, our visual perception is that they get closer together and then finally converge into a single line. That is the vanishing point. 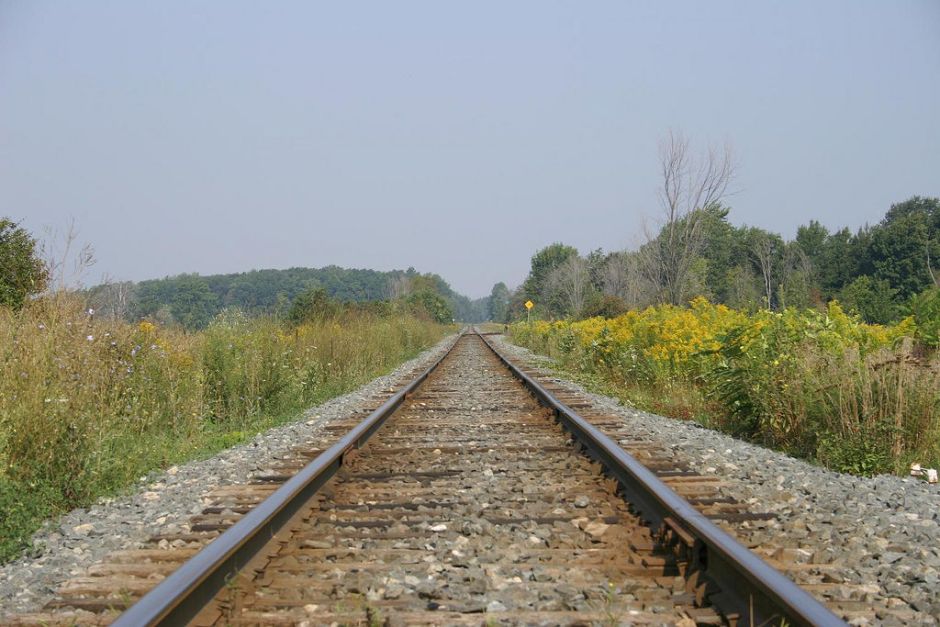 So long as your eye is perfectly aligned with your target and your red dot sight, it doesn’t matter what the focus distance of the red dot is nor the distance of the target; the dot will appear on the target exactly how it is zeroed. (notwithstanding height over bore, ballistic drop or wind, of course; you still have to do your part).

If you’re shooting from unconventional positions without firm cheekweld, or simply using the dot incorrectly and happen to have a vantage point away from the center of the window, it may be a different story. So long as your target and your red dot are on the same focal plane, you won’t experience dot shift or will have significantly reduced shift. However, if they aren’t on the same focal plane and you get weird with your viewing position, you can experience significant deviation with your dot. 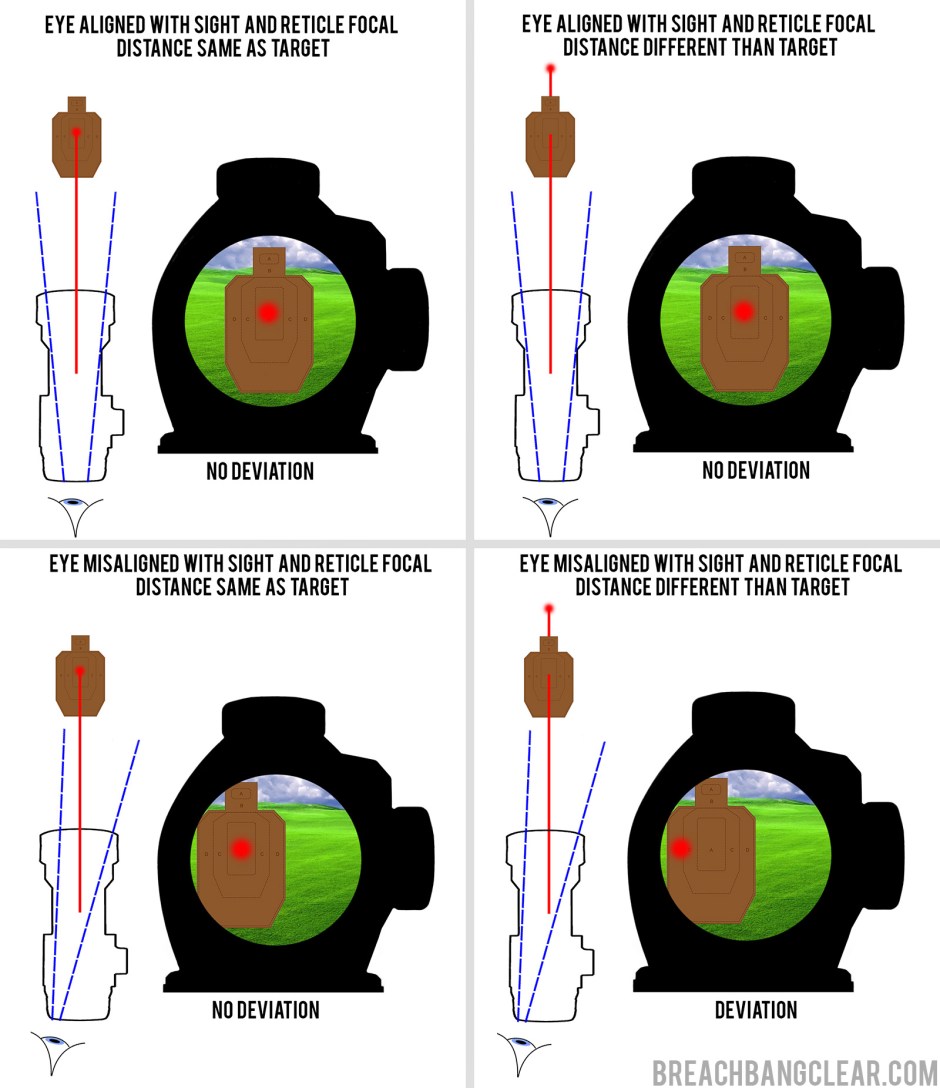 Some conditions make parallax deviation worse. Usually a red dot sight will have significantly more parallax with targets at closer ranges. A smaller, more crisp dot will appear to have more parallax than a larger, less-defined one. Generally speaking, the edges and corners are especially prone to parallax error because they are the maximum distance from the center of the optic window. Magnification also makes parallax more evident, which is why some magnified rifle scopes, especially those over ten or eleven power, have parallax adjustments built in. What this parallax adjustment actually does is allow the user to move the focal plane of the reticle in-line with the target, therefore reducing parallax error.

Now, some of these concepts are hard to depict with just text and photos, so I took the liberty of making a short video demonstration which you can watch below:

Dealing with Parallax
Have you ever seen 1x RDS with a parallax adjustment turret? Me either. There are several different methodologies that manufacturers employ to reduce parallax. One of them is focusing at infinity. Remember that perceived movement at longer ranges is reduced. A dot focused at infinity will have less apparent movement, especially with targets further than 50m away or so, than a dot focused at a closer range. A red dot sight with a smaller objective window will also have less parallax, simply because your vantage point can only deviate so much before you’re out of the window entirely. Many reflector setups will utilize a Mangin mirror, which is a concave lens that helps to ensure the dot stays in line with the body itself. This setup is especially useful for reducing parallax from lateral movement, though they still remain susceptible to deviations in vertical movement. No doubt there are several more methods.

Testing
Of course, I had to test this for myself. To do this I grabbed an assortment of loose red dot sights from the safe, a length of Picatinny rail, a vice, a camera, and a camera sliding rig, made a quick trip down to a local park and I was ready to go. A convenient tree was located 68m from the table where I was setting up and a target was placed. Each optic was first mounted to the Picatinny rail and then mounted in the vice. Next the optic was aligned roughly to the target; being perfectly in the center of the target doesn’t matter so long as any perceived movement from parallax error could be tracked. Seeing as how the sliding rig could only demonstrate lateral parallax, the camera was squared and aligned within the upper portion of each optic window.

Yes, I am setting up one of the worst case scenarios on purpose.

Optics tested were the following:

Want to place some bets? Here we go….

Yes, all exhibited parallax, even those marketed and advertised as parallax free. No, this test wasn’t exhaustive of every red dot on the market, but a common selection with prices ranging from $40 on the low end to $1,000 on the high. Just knowing the nature of what parallax is and how it works I will be legitimately surprised if anyone releases a useful truly parallax free red dot.

Other Aberrations
When watching the video you may have noticed some other optical oddities aside from the simple parallax errors with some of the sights. Namely, changes in color rendition and optical refraction. Here’s an animated GIF from the Trijicon MRO if you didn’t catch it while watching the video:

You can see there is definitely some refraction as the camera begins looking through the optic itself. Light gets refracted when it travels through a material that slows it down. More optically dense materials will refract more light. Sometimes this results in image shift, as when looking at objects into water, and other times it can result in magnification or other distortions. The configuration and type of lenses employed can and will result in different levels of optical density.

Colors can also appear peculiar when looking through an optic. A blue or green tint is not terribly unusual just due to any anti-reflective or other coatings used during production.  Of the optics tested, the EOtech was the only one that didn’t exhibit any of these aberrations, with the Leupold LCO being the best of the reflector-type sights. Anyway, these optical anomalies are not inherently bad, just something that was made exceptionally obvious while performing these tests.

Conclusions and Loose Rounds
Parallax exists. That said, it’s not all bad nor is it the end of the world–it’s just a simple fact of life. Bear in mind that parallax errors with quality modern optics are relatively small and may even require a specific set of circumstances to rear their ugly heads. With that said, I do wish more manufacturers would be up front about their claims of “parallax free”. Maybe add an asterisk and then write in really small letters at the bottom: “provided that the target is at least X meters away and then only for lateral shifts“.

As always, I encourage you to be an informed consumer and to look at manufacturer claims with a healthy dose of skepticism.
-DFM