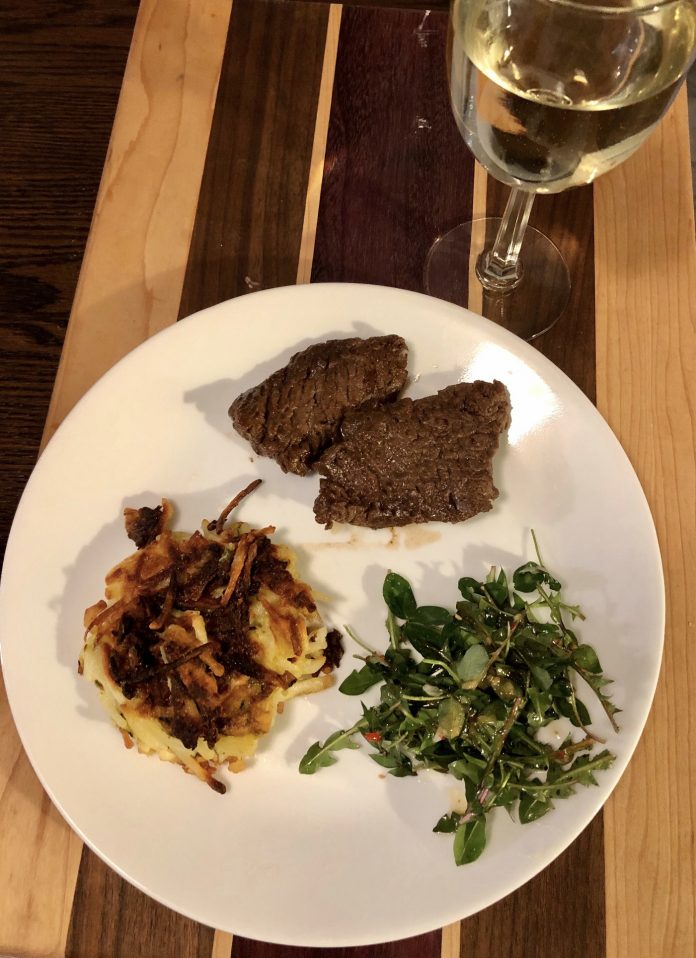 Well, I’m feeling quite smug and pleased with myself these days, because those measures have allowed me to eat well despite “social distancing.” I have not needed to go to the store in over three weeks and counting. Granted, I am not feeding a family of five, but the principle stands.

Now that I’ve nearly dislocated my shoulder in patting myself on the back, I thought I’d share a few of the dishes I’ve been able to prepare using just what I already had in the pantry, fridge, and freezer.

Back in February when I had a feeling that all this might be coming, I went through my food stash and pulled out anything that had outdated so that I could use those first and replace them while I still could. Canned goods are really still edible for years after the outdate, but if you keep everything updated, mores the better.

Besides those outdated canned goods I also had some homemade beef jerky that needed to be used soon, so I decided to chop that up fine and soak it in water overnight in the fridge and see if I could make a hash of it.

It worked! Add some outdated canned veggies, some V8, some rice and spices, and I had a quite edible (if not exactly gourmet) filling dinner for several nights.

After the success with the hash, I decided to see if I could do something similar with some outdated canned peaches and outdated sweetened condensed milk.  After a little recipe Googling, I had a frame work. Add some self-rising flour (it already has baking powder in it), a little butter and some oatmeal, and I had peach cobbler!

I wanted a side dish to go with the sloppy joe meat from my venison and boar, so I pulled out my dehydrated corn, dehydrated peppers and dehydrated onions, rehydrated them and added outdated canned kidney beans and some frozen chopped cherry tomatoes from my window garden. I dumped the last of the bottled salad dressing over it and Ta-da – Corn Salad!

I was casting about for a side dish for the pan fried venison I had planned, and came up with this idea. I didn’t want “just” potatoes, so I hit upon using my dehydrated shredded zucchini combined with some frozen hashbrowns to make fried potato/zucchini cakes. I haven’t yet tried dehydrating shredded potatoes or I’d have used those instead of frozen. I altered an internet recipe, and they turned out great!  Betty Crocker has a decent version here. I definitely need to try dehydrating shredded potatoes when this is all over (I’ve only done sliced so far).

My window lettuce wasn’t ready to harvest yet, and my fridge romaine was getting ugly, so for two weekends in a row I ate dandelion and clover salad for my fresh greens serving. After that the dandelions started to bloom, so I switched to using the flowers.

I was running out of store bought snacks so I decided to feed my sweet tooth with dandelion petal cookies. The petals lend a fibrous texture not unlike coconut. I added a chopped up dark chocolate bar – because pandemic means stress, and stress requires chocolate.

What do you get when you combine some boar chops left over from the instant pot, some of your dehydrated veggie stash, soy sauce and spices, some rice and some eggs? Boar Fried Rice. And it was heavenly.

[Warning – Keto followers need to look away now – the following may contain gluten and carbs which will cause you to fall off the Keto wagon.]

I’ve been baking my own bread for the better part of two years now, with only the occasional store bought bagel in between, so yeast is always on hand at my house. But wanting to stretch that supply as long as possible, I “woke up” my sourdough starter that had been snoozing in my fridge for months.

It’s not difficult to “create” a sourdough starter, but it does take several days to a week to get going from scratch using only the “wild” lactobacillus and yeasts that are already present in the flour. Once you’ve got it going you can keep it in the fridge and just “wake it up” the day before you want to use it, for a self-renewing, nearly inexhaustible supply of leavening – without needing store bought yeast.

Sourdough tips are all over the internet, but King Arthur Flour has a website full of baking advice all in one place.

I’ve had great success with the rye flour that I get at the local farmer’s market to make a starter. For some reason rye seems to have a greater supply of those wild strains that you’re looking for. Once your “mother” is going well though, you can feed it with wheat flour if you aren’t a rye fan. I won’t include recipes here as they are all over the internet, but suffice to say that once you’ve gotten a good sourdough bread recipe under your belt you will never settle for Wonderbread again.

The process of “feeding” sourdough starter on a regular basis results in some volume of unused starter – in order to keep from ending up with quarts of the stuff. Thus, recipes abound for using what is called “discard”. I found one for waffles and pancakes from King Arthur and just like for bread, once you have good sourdough waffles from your freezer, you will never look at Eggos the same way ever again.

In another bid to use up sourdough discard, I discovered pizza crust. I found that this recipe cut in half makes a nice “personal size” – also without the need for store bought yeast.

With Easter coming I didn’t want to go buy a ham. Not only am I only feeding myself, but that would defeat the purpose of trying not to go to the store.

I had a couple baggies of shredded ham in the freezer from the last time I cooked down a ham bone to make soup, so I decided to do Scalloped Potatoes with Ham.

I had dehydrated red potato slices that I dehydrated last summer. I had canned evaporated milk, I had a partial tub of french fried onions left from green bean casserole months ago, I had American cheese, and I had bacon grease still in the pan from breakfast (trying to conserve my butter supply).

Adapting a half-recipe from here with what I had, I got a very delish pie plate full of Pandemic Prepper Potatoes.

Stocking Up for Next Time

Have I made you hungry yet? I hope so. Because being hungry for something is a great motivator to try a new recipe with ingredients and substitutions that you may not have thought of before. During a state of emergency, flexibility and imagination are your friends!

It’s a little late now to stock up, but experience can be a good teacher if you let it. Write down now the things that you are running out of and the things you wish you had in your pantry. Then, when this is all over you’ll  know where to start in your newfound deeper pantry efforts.

One of my “wishes” is more cheese. I’m saving the shelf Velveeta and fake canned nacho stuff until I’m completely out of fridge cheese, but I’m all out of mozzarella for pizza “now“ (sniff).

I’m am SO glad that I started learning about food preservation and foraging the other year. I still have a lot to learn, but the little knowledge I do have has already proven itself beneficial. I hope it will be for you too. Stay safe.