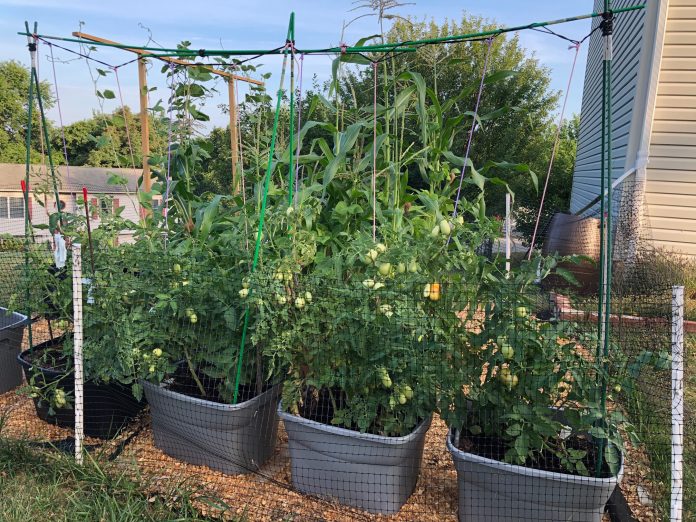 With writing all the other pieces on gardening, I’ve kind of kicked the can down the road a bit with this one. Everybody grows tomatoes and peppers, don’t they? There isn’t that much interesting to say is there? Thus my putting it off.

Well, screw that. Even if everybody and their brother is growing them too, I’m still having a lovely time with my tomatoes and peppers this year. I’ve had very little experience growing garden crops outdoors, so everything is still a learning lesson, as you’ll see in a minute.

Last year’s outdoor garden attempt was quite a disappointment, what with blossom end rot and deer predation taking out most of what my four whole tomato plants produced. This year it’s fun to have some apparent success for a change. But I’m still holding my breath a little waiting for some unanticipated disaster or other. I’m pragmatic/pessimistic that way.

With all that said, let me tell you about my pandemic tomatoes and peppers.

Romas in the Window

We had a pretty mild winter here, and I was getting the late winter blahs, so I started my tomato seeds a few weeks too early. It was late February (lesson learned). My goal was pasta sauce and maybe salsa, so I planted Roma seeds in the window. I like meaty “cooking” tomatoes rather than watery slicing ones. I still planted my usual window cherry tomatoes, but the Roma seeds went into toilet paper tubes in the window as well.

They sprouted well and were promptly moved to butter tubs while I (albeit impatiently) waited for the last frost. The problem is that the weather took a turn for the colder and stayed that way until Mother’s Day.  Meanwhile my tomatoes got taller and leggier, and a few even put out blossoms – in the kitchen window. I had a veritable jungle going on behind those curtains.

I was on the verge of trying to stake the 3-foot tall plants up in the window somehow when the weather finally broke. I planted my tomato starts outside in plastic storage tubs on May 16th, but they looked pretty pitiful and were not at all happy with the hardening off and transplant process.

They looked so bad, that I actually masked-up and bought a few starts from the local garden center. I was sure they weren’t going to make it, but they surprised me. I’ve now got four storage tubs containing about ten tomato plants. Yes, I know that’s crowded, but like I said – I was sure that several of them were going to die on me. When they didn’t, then I was stuck with the arrangement.

These tomatoes seem to be doing very well so far, and I’ve harvested some already to my amazement. Although I’m trying to do compost and “natural” fertilizer as much as possible, I did add some Jobe’s plant food spikes to the containers since the plants were so crowded.

If the blossom end rot stays away, I should be up to my elbows in Romas when they all ripen. I’m ready to can them into pasta sauce and salsa if/when that happens. (The cherry tomatoes will be frozen and dehydrated as before.)

And just to prove to myself that this is all worth the effort – the local farmer’s market FB page just listed tomatoes at three dollars – each! WHAT??!!

I’m not a huge “hot” food fan, but do like a little “zip” in my salsa, pepper jelly etc. To that end, I started four jalapeño peppers from seed in the window – also in late February.

Like the tomatoes, I started too early and my peppers got taller and taller in the window while I was waiting for the the weather to break. Again I was unsure of survival because the plants looked so pitiful upon transplant outside into tubs. So also like the tomatoes, I added two more starts from the garden center.

That gave me six jalapeño plants! Since they all survived I may have more pepper jelly than I originally planned for. But that’s the beauty of home canning and dehydrating – you can always preserve the extra harvest for later.

Speaking of which – I just canned a batch of pickled cabbage/coleslaw last week from my container-grown cabbage, so that was a pandemic garden win, too.

Now for a little side story.

How can you tell that I’m an outdoor garden novice? It’s because I found two really fat green caterpillars on one of my pepper plants a few days ago and had to ask social media what they were. (D’oh!)

Turns out they were “Hornworms”. The biggest one was almost 4 inches long and like half an inch in diameter. That sucker would have made a disgusting pop if I had killed it.

Yes, I said “if I had” – as in I didn’t. Despite exhortations from all quarters to send these gardener’s nemesis hellspawn to their squishy graves, I relented.

See, the problem is that I have an adult daughter whose hobby is bugs – particularly moths. This offspring’s first polysyllabic word was “Calerpetter”. It turns out that hornworms (which are really caterpillars, not worms) are the larval stage of really interesting Lepidopteran family called Sphinx Moths or Hawk Moths.

Sphinx and Hawk Moths have the longest tongues of any moth or butterfly in the world. And the Moths themselves run pretty big, too. The adult moths are important pollinators of native plant species. But their accomplishments are ignored and reviled because the caterpillars denude people’s tomato and pepper plants.

I’m never so happy as when I’m learning nerdy things, so I felt an obligation to learn more about these critters before just squashing them. My daughter was out of town, so I jury rigged a bug house to try to keep these larvae alive until she gets back. Right now I’m using it as an excuse to “prune” my tomato plants. I didn’t know that you are supposed to trim off excess branches below the fruit, so I’m doing it now and feeding the trimmings to the captive “Calerpetters”.

Now – I swear I’m not completely soft-headed. If I find any more of these beasties, I will happily drown them in soapy water rather than sacrifice my hard work in the garden. Had this been a REAL Apocalypse TM, rather than a practice run, I’d have had a scorched earth policy regarding garden pests.

But these two for now have been granted a reprieve – at least temporarily. Because I’m nerdy and have raised nerdy offspring, and it’s a pandemic year, and what else is there to do this summer but learn nerdy things about garden bugs?

On top of that, my local gun club just cancelled all matches for the remainder of the year. That includes IDPA, Steel, and Sporting Clays. Fortunately, UPS informs me that the plinking array I ordered is on the way. I’ll be trying to get out with the small caliber rifles and bringing my daughter with me. At least I won’t have to worry about the range being closed for matches on the weekends. What a year!

If I haven’t bored you to tears yet, stay tuned for the last piece or two of the Pandemic Gardening puzzle!