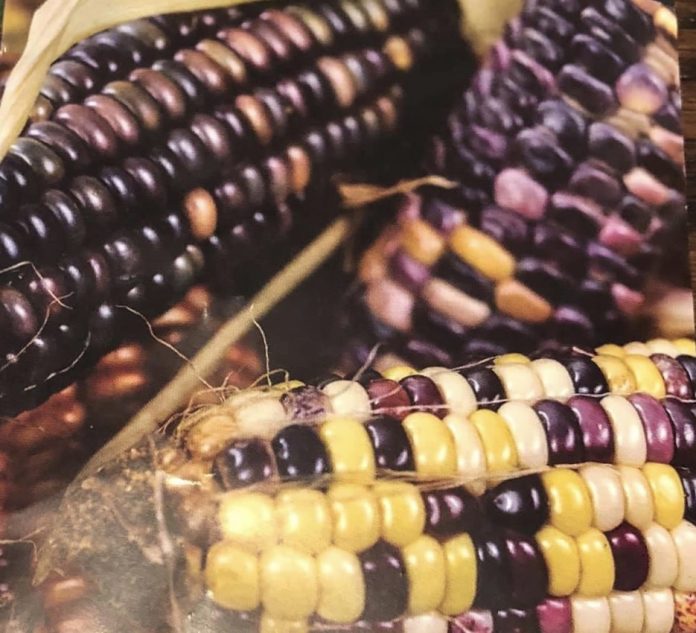 When I was looking into gardening options this year I was learning about “companion planting” – what crops/plants do well together or even positively complement eachother. One method of companion planting that has hundreds if not thousands of years of history behind it is the concept of the “Three Sisters”.

The Three Sisters is a Native American method of companion planting that was used by various tribes throughout the Americas.

The “sisters” are corn (maize), beans, and squash, which when eaten together constitute a balanced diet of the right amino acids.The sisters not only complement each other nutritionally, but in growth habits as well.

The way a sister planting works is that the corn is planted first. Once it is well established and 6-12” high, the beans are planted, which will then climb the corn like poles and fix nitrogen in the soil. The third sister – squash – is planted last so that the broad leaves help shade and protect the soil from drying out. It is said that the prickly squash leaves also help deter animals which might want to munch on the plot.

This idea intrigued me and I decided that this was how I was going to plant my new raised bed. Granted my 4×6 foot bed would represent only a one “hill” test plot, but I wanted to try it anyway. My pandemic garden is really just a testing lab for a survival scenario anyway, so why not see if I could make the old ways work for me?

The corn variety I chose was an heirloom sweet variety that is multicolored. It won’t be as sweet as say Silver Queen, but I thought it would look like what we used to call “Indian Corn”, and that’s what I wanted. I’m just not sure that’s the proper term for it anymore. I bought the seed from Baker’s Creek and the variety is called Astronomy Domine Sweet . I seeded the corn on May 15th , a week after the last frost, and waited.

I only had enough room for 24 corn plants – about 1 per square foot. But that was supposed to be enough for wind pollination. Corn apparently does better pollination -wise if it is planted in “blocks” rather than a few long rows. I didn’t have space for more, or I’d have done several blocks planted at two week intervals. But I’m planning another raised bed for next year, so staggered planting will be next year’s project.

Although corn takes up a good bit of space for the amount you get, it is still a good “survival” crop.  Obviously eating fresh off the cob is most people’s favorite, but corn can be dried for long term storage, and ground into meal and flour. I’m still researching varieties for that (I hear popcorn is a good choice), but this year I went with sweet eating ears for the sake of the experiment.

Within a couple weeks the corn was tall enough (6-8 inches) to plant the beans. I’m not a huge shell bean fan, so I chose a variety of Blue Lake Green Beans – pole variety- which dehydrate for storage really well. Once I see if this method works for me, then I’ll make double sure I have a good heirloom variety for next year that I can seed-save.

I planted the beans in threes around the edges of the corn so that they would get enough sun. They took less than a week to germinate and I soon had happy little bean plants next to my happy corn plants.

The beans-as-companions are dual-purpose. They are supposed to keep the soil fertile (since legumes are nitrogen fixers) and climb the corn for support. The climbing beans are also supposed to stabilize the corn in high winds – a symbiotic relationship. We’ll see if it actually works for me in my experimental plot.

So far (I’m now at week 6) some of the corn has stalled out at one end of the bed. If the corn doesn’t get tall enough for the beans to use as support, I’ll have to build a trellis for the beans to climb at that end. I’ve got three used 1×2” uprights that I had from my PVC target stands that I’ll have to sacrifice for the cause. I’ve already pulled all the staples out of them and plan to assemble this weekend.

Beans are a decent choice for a survival garden because they help fertilize the soil, and are storable over the winter. I will be freezing and dehydrating mine, but the pioneers strung them on threads and hung them from the rafters to dry. Some people called those “leather britches”.

Squash is the third and last sister of the trio. What I read about three sisters plots didn’t indicate that the type of squash was critical, so I used Waltham Butternut Squash seeds that I had left from last year and which had produced well for me with no effort after planting the seeds.

I had to wait a few more weeks before squash planting for the beans to become established and tall enough that the squash wouldn’t shade them out once it got going. The seeds germinated in about a week, and the baby plants seem happy so far. Last year it did well with no effort, so I don’t anticipate any problems.

Butternut squash is a good “survival” choice because it is a winter squash which keeps well in a cool place (like the basement or a root cellar) for several months without any special treatment. Last year I got 5 nice-sized ones from the two seeds I planted, and they were all eaten by Christmas. I made creamy Squash soup (which was delicious), and maple roasted cubed squash for Christmas dinner. This year I plan to try to dehydrate some as well for even longer term storage.

Obviously this three sister experiment is still ongoing, so I can’t tell you what kind of success I had. I would love to know if this traditional companion planting works for me in my yard. We’ll all have to wait until fall for the final verdict, but I’ll probably make a few garden update posts as we go through the summer.

Stay tuned for more pandemic gardening, because I’m not quite done yet!