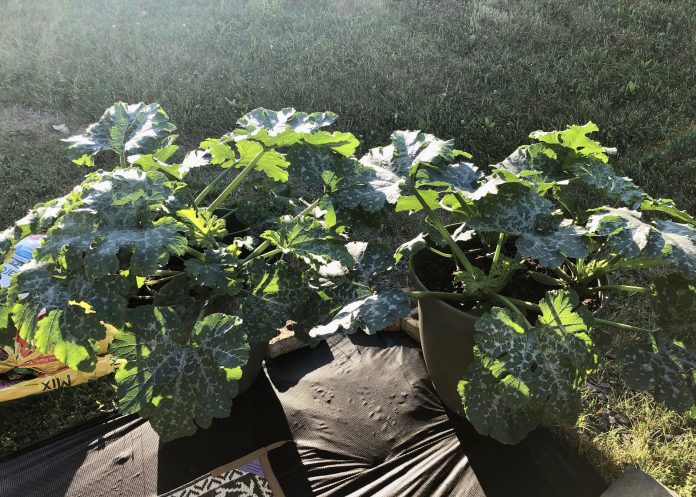 Continuing the pandemic gardening saga I wanted to include more options for those with only an apartment balcony as a “yard”. I have two words for you. Container. Zucchini.

I stumbled on this variety last year by internet search. I don’t have a ton of space to devote to rambling zuke vines, so I tried growing this variety in a storage tub.

It worked great, and I had pickable zucchini in a little over a month from seed.

Zucchini are nutritious and versatile, so I think they are a great pandemic garden addition. I have put zucchini into pasta dishes and made a fresh veggie salad out of it. You can make zucchini into pickled relish, bake it into casseroles and I have had great success dehydrating it with spices for snack chips and also winter storage for later use in stir fries and soup. For those with a sweet tooth, there is also zucchini bread and muffins.

Container zucchini is yet another option for those of you getting a late start in the growing season. There is still plenty of time to get going with this variety of zucchini since they start bearing after only about a month or so. I ordered my seeds from Amazon. You don’t need fancy expensive garden planters either. Mine grew last year in a 5 dollar sterlite storage tub filled with potting soil.

This year I did splurge on nicer looking planters for the patio area, but that’s only because this year I actually “had” a patio area instead of just gravel and weeds. I figured if I was going to be home all summer I might as well make a nice relaxing spot for myself. The bonus is that the container zucchini looks kind of decorative and tropical in the patio area. I’m not sure the neighbors will even notice that it’s actually food and not landscaping.

Another staple “crop” you can grow in containers is onions. I bought mine as “sets” in a bag of 100 for 3 bucks at Walmart.

Onions go well as “companion” plantings with many other staple veggies, including tomatoes, cabbage, and carrots. Thus, I scattered my onion sets all throughout several planters of those veggies. They seem to be doing well so far.

I’ve never grown onions before, so this is a new experience too, but everything I’ve read has been positive about container growing and companion planting. I plan to braid the onions together to hang in my basement for storage and also dehydrate some for dried onion flakes and rings.

An additional idea for a balcony garden is bush beans. These varieties don’t need a trellis to climb, they stay lower in, well – a bush.

I tried growing a tricolor mix (green, purple, and yellow) last year in storage tubs, and although the plants themselves did well and I harvested a few handfuls of beans, the local deer periodically came along and mowed everything off. So my harvest was scanty.

This year I have a fenced area, so I’m planting bush beans again. Except this year I’m going for even cheaper containers than 5-dollar tubs. Since I’ve had success in the window with bag-lined cardboard boxes, I’m taking that idea outside. I dug the box my instant pot came in out of the basement and also the box for another small appliance, wrapped them each in black plastic garbage bags and dumped in some potting soil.

Now I’ve got two additional container planters that were virtually free! They only have to last the season, and if the boxes are wet and yucky by fall, I’ll put them into the compost. Plus, being covered in black plastic makes them blend in with the gray and black container tubs I already have. Visually, they look more uniform and less trashy that way for the neighbors (a consideration if you live in an apartment building or a picky neighborhood). I’m also thinking about covering an old broken laundry basket with a garbage bag and using it the same way.

These beans are ready for harvest in about 70 days, so they are yet another option for those getting a late start gardening this year. Mine should be ready by the end of August. I plan to dehydrate them, but freezing and canning are other options for winter storage.

Don’t go away, because there are a few more pandemic gardening ideas coming over the next week or two. Stay tuned!