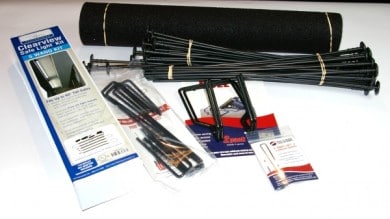 It is a little embarrassing to admit, but my once empty Liberty Fat Boy safe went from looking neat and beautiful to “grandmother’s closet” in a very short period of time. You know that one closet at grandma’s that you were scared to open without jamming your hand inside to hold back the mass of crap which was sure to pour on the floor as the door opened. In my case, I was executing the same maneuver to assure guns didn’t start tumbling on the floor as I opened the safe. It was time to find a better solution to avoid beating up any guns, and grandma would have expected more from me. While at this years’ SHOT show, I saw Gun Storage Solutions Store More Guns Rifle Rods, and Dualies & Handgun Hangers for pistols. Store More Guns promised 30% more space and easier accessibility with less firearm damage. The Liberty Fat Boy is sizable, and 30% more space would be like adding another small safe, so I grabbed a set of each of the products to test them out.

The rifle rods are essentially 16” plastic non-maring/non-marking rods with a button and Velcro attached on one end. The Rifle Rods are compatible with calibers down to and including .22LR. I picked up the Large Kit which includes 40-rods plus a large 19”x60” piece of Velcro to cover the underside of a shelf.

The concept is simple; Velcro covers the underside of the shelf and is attached via a stable gun and trimmed to fit, rifle rods slip down the barrel and hold the rifle vertical by attaching to the underside of the Velcro shelf. The rifle rods only need to hold the rifle standing vertical and do not support any weight, so the Velcro is plenty strong to do that job. Simple and it works. The big plus to the system is that rifles can be packed in about 30% more densely because less efficient internal safe gun racks can be removed. In theory the Fat Boy had slots for 64 rifles, but I never made it anywhere close to that with AR-15s and odd shaped rifles/shotguns. The wood Liberty Safe internal guns racks are nice but never really worked for me once “critical mass” was achieved within the safe and seemed to force many guns to be spaced too far apart. With the stock Liberty Racks, a 30 rifle capacity was more realistic if you wanted to access any of the guns beyond the first row.

With the Rifle Rods, all those racks come out and the rods handle all the rifle retention and do that job far better than the wood racks did, especially with AR-15s and scoped rifles. Where the wooden racks allowed the rifles to wiggle around and move as you store and retrieve rifles, the Rifle Rods hold the stored rifles in position until the Velcro rod is pulled down away from the underside of the velcro lined shelf — a much more secure storage option that prevents the grandmother’s closet effect.

Retrieval from the safe is also far more convenient because there are no gun racks to work the guns free from. Simply remove the rifles directly in front of the rear rifle and then remove the rearmost rifle. Works great and now I am not scratching all my rifles when pulling them in and out of the safe. If you have a safe you need these both to improve storage, but to also reduce potential scratches and bangs created by maneuvering around gun racks.

Since I also had more than a few pistols piled up in the safe, I decided to tidy them up as well with two different products. The Duallie holds two pistols each with two Duallies included per pack. The Duallies are designed to stand on top of a shelf and hold the guns at roughly a 30 degree angle. I found that I liked these most for storing guns at the bottom of the safe. The Original Handgun Hangers are designed to hang under the shelf and provide 90 degree retention of pistols directly under the shelf to recover wasted space. I found that working these in between the Rifle Rods really made for convenient and efficient pistol storage. I like the Duallies, but the Handgun Hangers allow for a higher density of pistols which is what I was after. My only problem is that I just need a few more. Like the Rifle Rods, the Duallies and Handgun Hangers are compatible with calibers down to and including .22LR. Gun Storage Solutions also offers optional accessory rubber tips for the Duallies and Handgun Hangers to provide improved retention for larger calibers, but once installed, they are no longer compatible with .22LR calibers. I needed light in my safe and I was tired of using a flashlight every time I needed to get into the safe. The original Velcro attached battery operated lights included with the safe worked for a short period of time, but soon either smashed to the floor or corroded over and ceased operation.

Liberty’s Clearview LED Light Kit delivers 110V household current powered LED lights triggered by an automatic motion sensor. The lights attach via high-pressure double stick tape just inside the lip of the door. The effect is that the light shines all back toward the rear wall and not directly in your eyes.

The other effect is that it is BRIGHT!!!!! Yep, now do I not only hear that chorus of angelic church sounding “AHHHHHHH” in my head every time I open the safe, but I actually do get a super bright internally lit safe that matches the effect. $160, but well worth every penny. At this point grandma would be proud of how neat my Liberty Safe has become. In fact everyone likes to look in my safe now, because they can actually see all the cool stuff in it. I have personally sold at least a half dozen Rifle Rod and Handgun Hanger kits to friends who are now as thrilled as I am about how great their safe looks.

All in, I invested around $340 into my safe makeover. Sure, I could have picked up another cheap… very cheap, safe for that, but the reality was that I was not using my Fat Boy to it’s full potential and was really having some problems even seeing inside without a flashlight handy. As of this article, I have picked up a few more Handgun Hangers to assure all my pistols are nice and orderly… just like grandma would expect.

*Allow room for length of gun and ensure door will shut when using this product. Shelf must be at least 10.5″ deep to use this product.