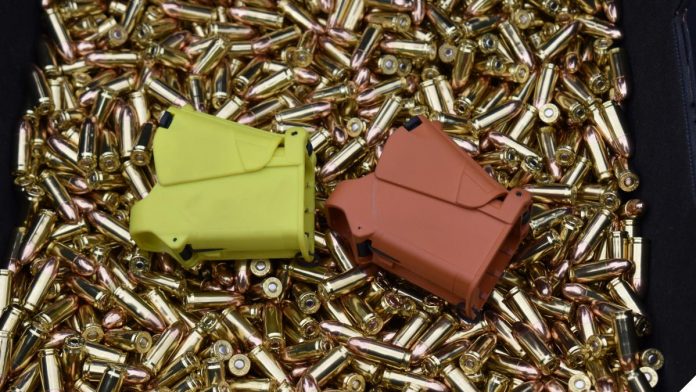 Getting ammo in the Keystone State could be a bit more difficult if pending bullet control legislation passes. (Photo: Chris Eger/Guns.com)

New legislation introduced this month in the Pennsylvania House aims to add fees and limits to how Keystone Staters buy their ammunition.

Pennsylvania House Bill 2344 was referred to the chamber’s Judiciary Committee last week with a dozen sponsors. Filed by state Rep. Tom Murt, R-Montgomery, it would wrap the ammo buying process in layers of Harrisburg red tape.

In its current format, the 25-page bill would mandate those who want to pick up some bullets first obtain a proposed Ammunition Purchase Authorization Permit, a four-year $50 ammo permission slip controlled by state police. Permits, which could take 30 days to process, would be tracked, their information retained in a central database, and subject to revocation.

When it comes to the act of buying ammunition, with a $3 surcharge payable to the state, ammo could only be purchased online if it is delivered to a licensed importer, manufacturer or dealer to process a subsequent face-to-face transfer. This would end the common practice among Pennsylvanians of ordering from e-commerce ammo retailers such as Guns.com and having it conveniently delivered to their home.

Further, Commonwealth residents under the proposal would be barred from legally transporting ammunition into the state that was acquired outside of its borders unless they have a licensed dealer coordinate the transfer.

While the bill exempts police and law enforcement from its requirements, those who violate the provisions of the ammo control mandate could face up to a second-degree felony, a punishment that is on par with involuntary manslaughter and provides from 5 to 10 years in prison and a fine of up to $25,000.

Murt is a suburban Philly Republican who took office in 2007 and announced earlier this year that he is not seeking reelection. All of HB 2344’s co-sponsors are currently Democrats.