Such a movement of course requires awkward contortions and therefore feels wrong while only a few have managed to train themselves with enough “dynamic” movements to do it and look cool.  Regardless of the method the results are the same; the rifle has shifted from the original fighting position.  So why charge on the right at all?

Any right-handed shooter who’s carried a semi-auto for more than a few hundred feet while wearing kit understands the problems with left-side charging: as the left side of the rifle brushes against the body a left-sided charging handle is likely to snag against gear and has the potential to pull the bolt out of battery, become entangled, or wear a hole in your kit.  Some designers like H&K remedied this with a charging handle so far forward that it stays out of the way but we digress.  This explains a problem with left-sided charging, but not why the AK charges on the right.

To answer this question we have to look at history.  When the bolt-action rifle came into existence it was accepted that the bolt handle should be on the right in order to keep the handle out of the shooter’s face and facilitate quick operation.  The right hand is the closest to the bolt so it just makes sense.  No one questions this and many American shooters take their first shots on a bolt-action rifle.

When semi-autos were being developed it was important that the design facilitate a quick transition for the troops with minimal training.  The Brittish Farquhar-Hill, French Hagen, Italian Breda PG, Luger Rifle, etc. all charged on the right.  Yes, even the M-1 Garand.  In the Soviet Union the SKS charged on the right and so of course advancement to the AK shortly thereafter meant a charging handle on the right.

With a bit of historical perspective it’s not so foreign to have a semi-auto charge on the right side and to use your right hand to do it.  Most of us have owned or shot one of the 6 million+ Ruger 10/22s that have been sold and we used our right hand to charge it without question.  The next time you shoot an AK try wit with your right hand and I bet after just a couple attempts you’ll find the movement more natural than reaching over or under and your movement will be complete with enough time left over to still admire the contortions your buddy next to you makes while he attempts to charge with his left. 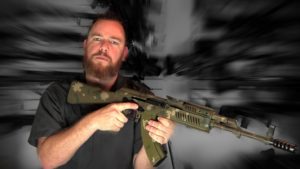 “Graham Baates” is a pen name used by a 15-year active Army veteran who spent most of his time in the tactical side of the Intelligence community.  Post-Army Graham spent some time in the 3-Gun circuit before becoming a full-time NRA Certified defensive handgun instructor and now works as an industry writer while curating a YouTube channel and blog on the side.