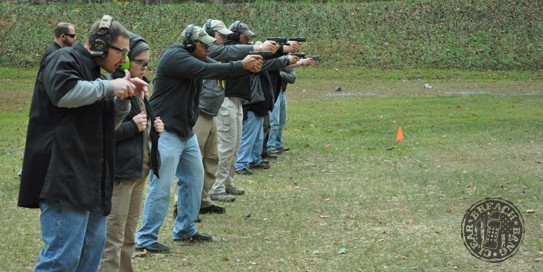 The below article is from Guns.com and highlights an important mindset that is worth sharing. The takeaways from this are easy to understand for those of us who understand the nature of the world. However many of these truths are more than many of the average population can understand.

Cops and military personnel wear body armor not because they’re going to get shot, but because it could happen.  Statistically speaking, the likelihood of getting shot on the job is remote, but nobody can dispute that cops get shot at and, therefore, those who wield guns for a living must prepare to shoot others and to get shot.

Preparing for rare possibilities is what cops, SWAT teams, soldiers, Marines, airmen and seamen do for a living.  But, obviously, you don’t have to be a cop, a soldier or a contractor to prepare.  Those who carry guns for self defense and are serious about it, must have a mindset that is totally different from those who don’t.

Those who don’t understand that violence could happen invest their lives in the thought, “It [whatever bad or evil thing may occur] will never happen here/to me/in my lifetime.”  They believe, “It’s always been that way” so there’s no reason to adopt a mindset of preparation.  In fact, some of these misguided people believe that preparing legitimizes a “violence that won’t occur” and thus, see such preparation as a “violent act” in itself.

These folks who lack a kill-and-survive mindset don’t comprehend what the rest of us do–reality and all it’s possibilities.  They think we’re animals, not realizing we all are in fact animals.  They’re shocked by our mindset and actions.

Still, the protectors of society and those serious about self defense must evaluate themselves and consider their own mindset constantly.  We can’t be shocked.  Rather, we should be shocked, but we can never let that shock prevent us from considering all the possibilities, like shooting a pregnant lady or a kid.  Could it happen?  Yes.  Will it?  I truly hope not.

This thinking must permeate every level of our training.  We need to consider that we could get injured during an attack and we need to learn how to fight while injured.  I carry and train with a MagneTactical on my belt not because I think I’ll get injured, but because if it happens, I want to be prepared.

Mindset is an essential weapon in any battle.  The truth is, deep down, most of us think, on some level, that we’re invincible.  This condition is most certainly a double-edged sword.

I’m reminded of what WWI veteran and legendary writer, Ernest Hemingway stated in his book, Men at War.   He wrote:

“When you go to war as a boy you have a great illusion of immortality. Other people get killed; not you. . . . Then when you are badly wounded the first time you lose that illusion and you know it can happen to you. After being severely wounded two weeks before my nineteenth birthday I had a bad time until I figured out that nothing could happen to me that had not happened to all men before me. Whatever I had to do men had always done. If they had done it then I could do it too and the best thing was not to worry about it.”

Living life thinking we’re going to get hurt, injured or killed is not a good way to live, nor a great mindset to adopt for success in a fight.  Confidence heads tactical CPR, but true confidence comes from knowing and mastering the possibilities—there’s that word again.  It’s possible, right?  That’s what we must concentrate on.

Yeah, I might not get robbed at gunpoint at the grocery store today and an active shooter might not start killing dozens of people, but it’s possible.  And in the event possibility becomes reality, I’ll be prepared to stop it.  That’s just the way some of us think.  We live in the possibilities—the place the others can’t or don’t want to comprehend.

If you take anything away from this article, let it be this: there’s a lot more mental preparation that goes into survival and defensive shooting than many people think.  I mean possibly even more training than what goes into learning to hit a bullseye consistently. The ignorant may think we’re weird and paranoid, but we know different.  We’re not paranoid.  We’re vigilant.  We’re prepared.  And, yes, we’re also lethal and dangerous.  But it’s okay, because we’re the good guys.  We’ll save those who aren’t capable of saving themselves.