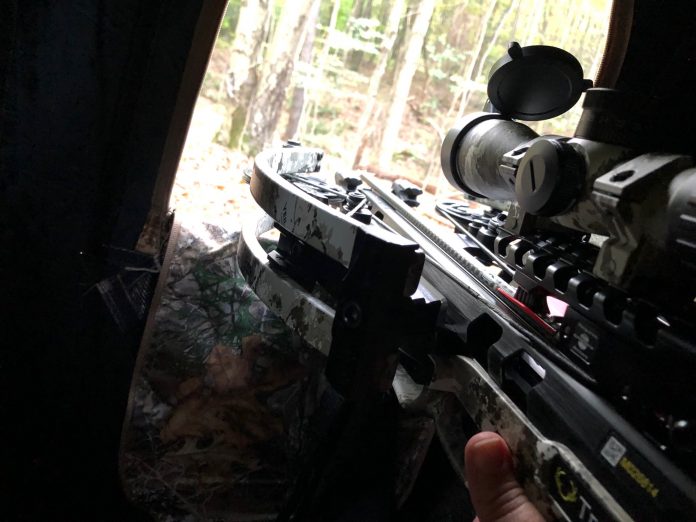 Opening Day of deer archery season 2021 has been accomplished – I was there and participated! Which in itself is a victory of sorts given all the “barriers” I have written about over the past month or two. My tag is yet to be filled but it was only day one and I still have high hopes for success this season.

My first “day” of the season actually started the night before when I had the conundrum of deciding whether to pay $150 for a hotel room in the area for the six hours of sleep I’d get til I got up there. I also briefly entertained the idea of just driving straight to the property and sleeping in the car. But in the end my exhaustion from the work week overcame me and I just went to bed at 7pm with an alarm set for 2 AM.

That alarm came way too soon, but I was out of bed and out the door to the car by 3AM. It reminded me of residency (ugh – flashbacks). The drive was cool and foggy and that, combined with a couple bathroom stops (because my confused body didn’t know what time it was) conspired to make my arrival later than planned. But I still had my butt in the blind by 6AM for a shooting time start of 6:47.

At about 7:04 I saw my only deer of the day. It was even a buck. I had heard some blowing earlier when it was still dark, so that might have been him. He was at about 40 yards, so nice crossbow range, but even with the scope I couldn’t be absolutely positive that he had the required three points on one side (mandatory state antler restrictions – ugh). I looked and looked but just couldn’t be sure, so I let him walk. He disappeared shortly afterwards, not to be heard from again.

I was actually surprised I saw him. I’ve seen mostly doe on cam, and that was what I was prepared to take – freezer filler, not trophy antlers. But I didn’t see a single doe. Oh well, it’s not even really the rut yet, so things are just getting started. Still, I was glad to have at least seen SOMEthing. That keeps my spirits up until next time.

Somewhere about three hours later when I had put down the crossbow and poured myself a cup of thermos hot tea (temps were still in the 40’s), I heard leaf rustling.

I quickly abandoned the tea and quietly scrambled to get back in position. I couldn’t see well enough out the partially unzipped side window (The trade-off of multidirectional vision vs scent control), so I just waited and listened.

I decided that it sounded too big to be a squirrel and I was getting excited – but then I heard the purrs and clucks and saw a flock of turkeys to my right, ambling their way through my field of vision. I’d seen them on cam before, but it was still fun to see them in person – even if they weren’t a deer.

After a snack and a doze in my comfy seat, and another alert hour until noon, I decided to pack it in. I figured nothing would be moving again until twilight, and that wouldn’t be for six more hours, with shooting times ending a bit after 7pm. Even with a book and my phone I was getting bored and cranky with my body still not knowing what time it was, so I gathered up my gear and hiked back up to the car.

That is another thing that I just don’t understand about the damn ATVers (which I saw more of on cam after I left – Grrrr). They seem to think they’re such hot shit on those stupid things, but I was in and out of those gas roads with my standard issue Subaru. If a semi-old lady female pediatrician in a soccer mom car can do it – what makes YOU so coolio? LOL *sigh*.

I didn’t stay until twilight. I had originally planned to, but after I moved a different cam around on a different area of the property and ate some late lunch the malaise set in. I realized that even if I didn’t shoot anything it would still be 10PM til I got home (after leaving home at 3AM). And if I “did” get a deer, gawd knows how long it would take to find it in the dark (even if I called in the local guys I know), gut it, transport it to the processor, and get home. My exhaustion won and I drove home mid afternoon instead of staying til the bitter end.

Even so, fatigue notwithstanding, I’ve at least gotten a taste of the season now. To me it was a victory just doing what I did and I can hardly wait until next weekend to try again!