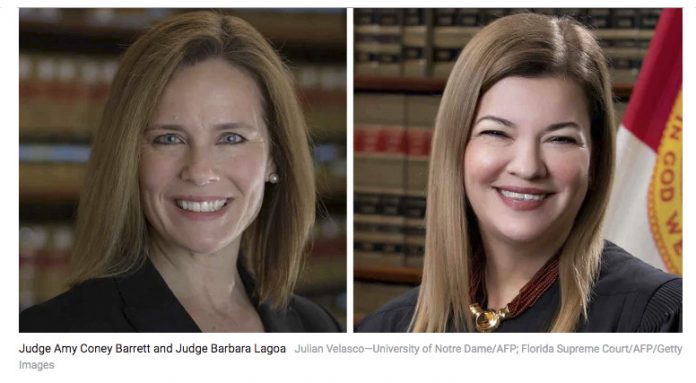 [Ed: Dr. Faria wrote these articles prior to the confirmation of Justice Coney Barrett, but the sentiments and foresight are highly relevant for SCOTUS’ next term. First published on Hacienda Publishing and GOPUSA on September 22, reposted here by permission. Part 2 will come Thursday.]

Some readers were surprised to learn from my previous article on this subject that the Supreme Court of the United States has not made it clear that the right to keep and bear arms is protected outside the home. “How can that be?” they asked. Further perplexed they wondered, “But what about the SCOTUS decisions in the previous decade that supported the Second Amendment as an individual right to keep and bear arms?”

But these 5-4 decisions have been hanging by threads. Chief Justice John Roberts has become an unpredictable liberal and unreliable as a constitutionalist. Moreover, the liberal justices’ dissent at the time provided a clear warning: “The Supreme Court is just one vote away from totally reversing District of Columbia v. Heller (the federal ban) and McDonald v. Chicago (the state ban).”

Even with these decisions standing, the courts and Congress seem to have acquiesced in vigorously interpreting the Second Amendment’s right “to keep and bear arms” in light of these two affirming decisions. Incredible as it may seem, some courts have interpreted them as protecting the right to firearm ownership in the home, but not in the street, or during transportation from one’s home to a shooting club or anywhere else depending on the state!

And yet, when we look at the other Natural or God-given rights supposedly guaranteed by the Constitution, we see that all of them apply to individuals both in and outside the home, including the prohibition against the quartering of soldiers in people’s home, a right enumerated in the Third Amendment. And when it comes to the First Amendment — “Congress shall make no law respecting an establishment of religion, or prohibiting the free exercise thereof; or abridging the freedom of speech, or of the press; or the right of the people peaceably to assemble, and to petition the Government for a redress of grievances” — we have to admit that we have also moved in an authoritarian direction.

We can go to churches, although this right has been curtailed by the farce of the COVID-19 lockdowns. We have also been guaranteed freedom of speech, although this right has been curtailed by insidious political correctness and the mere accusation of hate speech, as determined by the Thought Police of the Democrats, Marxist academicians, and the liberal media. As for peaceful assemblies and the redress of grievances, anarchists and communists infiltrating Black Lives Matter (BLM) and Antifa have been given a go-ahead for not-so-peaceful assemblies — or rather riots with violent looting and burning! Thus, as in George Orwell’s Animal Farm, some animals are more equal than others.

But ignoring these recent inconsistencies brought about by political correctness, and not by judicial precedents, the Supreme Court has held that when the phrase “the people” is used in the context of the Second Amendment, it means “individuals,” meaning “the right of the people to keep and bear arms shall not be infringed” (U.S. v. Verdugo-Urquidez, 1990). And these are the same “people” and individuals empowered in the other Amendments, including the 1st, 4th, 9th, and 10th Amendments of the Bill of Rights. The question should then be asked, “Why can’t the Second Amendment be a full right, like all the others in the Bill of Rights?”

We need to proceed with filling the vacancy left by the death of Ruth Bader Ginsburg and let SCOTUS get back to the business of the judiciary branch of government, particularly bringing the Second Amendment a la par with the rest of the Bill of Rights. And there is a lot of business that needs to be transacted.

For example, the Supreme Court has turned down several attempts to challenge the various Circuit Court decisions upholding restrictive concealed carry legislation in Maryland, New Jersey, and California. In California, the Ninth Circuit Court denied that the Second Amendment protects the right to carry concealed weapons in public. Justices Clarence Thomas and Neil M. Gorsuch expressed regret that the Supreme Court failed to take up the challenge of the California case and believed it was high time SCOTUS ruled on the issue of concealed carry legislation and affirm the Second Amendment right outside the home. In the words of Justice Thomas, “The Court’s decision to deny certiorari in this case reflects a distressing trend: the treatment of the Second Amendment as a disfavored right.” Thomas further wrote in his dissent, “For those of us who work in marbled halls, guarded constantly by a vigilant and dedicated police force, the guarantees of the Second Amendment might seem antiquated and superfluous. But the Framers made a clear choice: They reserved to all Americans the right to bear arms for self-defense.”

Open carry is another issue that hasn’t been settled to the satisfaction of gun owners, and the topic came to the forefront in Florida, the state that interestingly enough in 1987 passed the landmark concealed carry legislation. The case was that of Dale Norman, a Floridian with a concealed carry permit who in 2012 was arrested in Fort Pierce openly carrying a gun in a holster. He was fined and convicted of a misdemeanor. He appealed on constitutional grounds. The U.S. Supreme Court declined to hear the case and effectively let stand a Florida Supreme Court ruling in March 2017 stating that the open-carry ban of the state did not violate the constitutional right of citizens to bear arms. Attorneys for the state successfully argued that lawful citizens may already carry concealed weapons legally by obtaining permits without undue burden. They also cited the fact that the U.S. Supreme Court has yet to rule that the Second Amendment protects open carry in public.

Also the issue of the constitutionality of “assault weapons” has not been settled. These beneficial semi-automatic firearms with paramilitary-style looks have been under attack on both the federal and state levels. Despite their usefulness for sports shooting as well as life-saving tools during natural catastrophes, urban unrest, and self-defense against multiple criminal assailants, these firearms have been so maligned that some courts are yet to rule favorably on their constitutionality. On November 27, 2017, the U.S. Supreme Court refused to take up Maryland’s assault weapons ban. The Fourth Circuit Court of Appeals upheld Maryland’s Firearm Safety Act of 2013, banning the AR-15 “and other military-style rifles and shotguns.” Apparently, semi-automatic “assault weapons” were confused with fully automatic “assault rifles” and characterized as military weapons, and thus excluded from Second Amendment protection. Interestingly, the judge who wrote the majority decision stated, “Put simply, we have no power to extend Second Amendment protection to the weapons of war that the Heller decision explicitly excluded from such coverage.” Curiously, it was precisely in Miller v. U.S. (1938), the last major federal ruling on the Second Amendment until the Heller decision in 2008, that ownership of military-style weapons were specifically protected as a pre-existent individual right by the Second Amendment.

With a new Trump-appointed conservative Justice, SCOTUS should finally be able to allow the Second Amendment to sit in the front of the bus with the rest of the Bill of Rights!