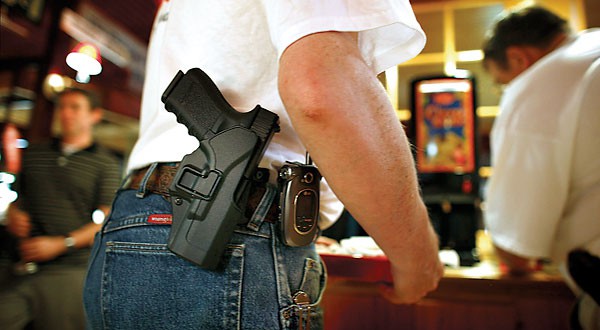 Recently one of our Facebook fans shared the following article with me: http://www.clarkstonnews.com/

Besides being just about the worst laid out mess of a site that I have seen since 1998, it is one of the worst articles I have ever read. I make no claim of being a college journalism major. However with a non existent budget and just the tiniest bit of skills I think we have made something here at 248Shooter that blows the Clarkston News out of the water.

Since I would not wish having to read the article on their website on my worst enemy, lets post it here and dissect it.

December 25, 2013 – Oxford Community Schools has joined the fight along with many other school districts in Oakland County and across Michigan trying to ban the open carry of firearms in schools by voting unanimously to sign a joint resolution to be sent to state legislators.

Ok so on Christmas, during the Christmas break, a school that is not even in session, joined with many other schools to ban open carry.

There is no mention of what other schools they are referencing, maybe because last I heard there was only one other school that tried this. So maybe 1 other school is many if you’re a liberal trying to find solace in numbers.

Under the Michigan Penal Code Act 328 of 1931, state law prohibits the possession of firearms, including those that are “open carried” in banks, places of worship, courts, theaters, sports arenas, daycare centers and bars.
But there is no mention of public schools.
“Many have interpreted the absence of public schools from the Michigan prohibition as permitting open carry in Michigan public schools,” said Deputy Superintendent of Human Resources Nancy Latowksi, who put the resolution together.

Or maybe our lawmakers intended that people be allowed to open carry in PUBLIC such as in a PUBLIC school.

“All of the restrictions are put on concealed carry holders who have to go through background checks, take training, all the things in order to carry and conceal, but any individual could open carry into a school and now, it’s chaos because you don’t know anyone’s intention in this day and age,” Reis said. “It just creates panic and the district isn’t setup to handle that on a daily basis.”

This is what bothers me more then anything. How do people that do not even know the laws, have the right to try and change them while working for tax paying citizens at a school. Further how do “newspapers” print articles without even the most basic fact checking.   Deputy Superintendent of Human Resources Nancy Latowksi or this person refrenced as Reis clearly have no idea what they are talking about. Non CPL holders are not allowed to open carry in a school. CPL holders are not allowed to carry concealed in a school. However the law is written as such that a concealed permit holder may open carry in a school. So the logic she uses that CPL holders at least have a background check actually shoots a hole in the theory against an open carry ban once the law is brought to light.

Because the intentions of a person open carrying within the schools aren’t known, the resolution states that a person entering an Oxford school with a firearm would result in that building “entering lockdown status.”

I actually side with her on this one. Open carry in a school is not a great idea in my opinion as it is currently written but my reasoning for that differs greatly. In order to open carry you need to have a CPL which is an unfair limitation. Further with the CPL you still have to open carry and cause your gun to be seen. I hate open carry from a personal defense stand point while I respect it as a protest or right of the individual. That said if Newton had not caused the Governor to veto the bill we as CPL holders would have the right to conceal carry in a school. If we had the ability to concealed carry most of the cases (not all) of people open carrying in schools would not be an issue as we would have the choice to be more discreet. So lets look at this as a way to increase gun rights not strip more away making our children the targets of psychopaths.

While the Federal Guns Free School Zones Act prohibits a firearm in or on the ground of a public school it does not override state law.
“The issue you’re dealing with is (the) federal government does not have jurisdiction or constitutional authority over public education,” explained OCS Superintendent Dr. William Skilling. “That’s reserved for the states.”
Board Secretary Kim Shumaker thought perhaps schools were left out of the open carry ban as a “loophole to allow security guards to carry,” but Latowski said “there are exceptions to allow security or people hired as security to carry.”
Board President Colleen Shultz said it was one of those things that “made no sense.”
“I am in full support in trying to right this,” she said. “It’s so mind-blowing that it seems it’s an oversight.”

Yes it is mind blowing that a person who has jumped through so many hoops to legally acquire a CPL license is not allowed to conceal carry where his most precious treasure is, his children. The law is not an oversight it was done as it was done so that CPL holders could have the right to carry but liberals could “know” who has a weapon. It was done to discourage people from carrying and now that people are exercising the right the liberals are even madder. The old give them an inch and they take a mile we have seen from gun grabbers for a long time.

Trustee Dan D’Alessandro believes “it is an oversight.”
“Just for the simple fact that . . . it says sporting arenas,” he said. “On a typical Friday night or even a basketball game, you’re getting 5,000 people there and it’s permissible to carry a gun at that point because it’s on school grounds, so there is a little bit of gray area when it comes to that in my mind.”
“It’s nonsensical the venues they identify, yet leave schools out,” Skilling added.
Treasurer Robert Martin was “gratified” the board passed the resolution.
“I am dumfounded by the idea that guns should be permitted in school,” he said. “I can’t wrap my head around that one.”

It is Trustee Dan D’Alessandro right to believe it is an oversight and it is his right to contact his legislature. However it is not his right during his paid time at a school funded by tax payers funds  using his position and time paid for by taxpayers to fight against our rights.
Further he might want to rethink why sporting centers and schools differ. There is a common theme in many of the prohibited carry rules. Places that serve alcohol are off limits. I know I have seen some tanked up fans at Red Wings, Tigers and Lions games. However at my sons sporting events it is not the same crowd. He might want to take that into consideration.

All in all the Clarkston News should be ashamed of themselves. First for the horrible presentation of a website. Second for the inability to do basic fact checking on an article. Third for the inability to even offer or discuss any alternative opinion to that of the school board. What do the local parents think of a school with funding issues wasting time on issues like this? If you live in the area I suggest you call the school board and let them know what you think. Further I admonish all of you to call this rag of a paper and let them know how you feel on Open Carry in Schools.

Update 1/2/14
Jim Zinke a follower of ours on Facebook and resident in this district has sent in the following letter to the Clarkston News. Since they have yet to publish it we will be happy to share the knowledge he brings to the table.

Dear Editor,
This article was full of mis-information and political pandering.
First of all Mr. Reis’ statement that anyone can open carry a pistol into a school is incorrect. MCL 750.237a section (4) states that it is a misdemeanor to possess a pistol in a weapons free school zone. Section (5) then lists the qualifications for whom this does not apply, one of which is having a concealed pistol license. Therefore only persons in the general public with a concealed pistol license can open carry into a school.
He also states “It just creates panic and the district isn’t setup to handle that on a daily basis.” I would like to know how many times the schools have had to go into a lockdown because someone was legally open carrying a pistol. I am not aware of any incidences of this in at least the last three years. This type of drama is uncalled for.
The Michigan constitution states “Sec. 6. Every person has a right to keep and bear arms for the defense of himself and the state.”
Based on this article and the article back in January of 2013 in Which Dr. Skilling stated that he was glad that Governor Snyder vetoed Senate Bill 59 which would have made it illegal to open carry in a school, but make it legal to carry concealed, I can deduce that our school board needs some education on the rights of the people.
Jim Zinke
Oxford