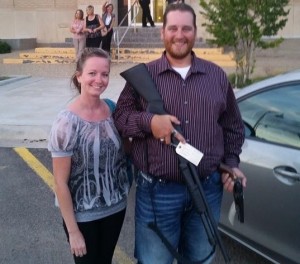 Michael Keoughan, right, after reclaiming his firearms following his acquittal on charges of disorderly conduct in Andrews, Texas. (Photo: Facebook )

Army veteran Michael Keoughan, arrested in January while open carrying in Andrews, Texas, was found not guilty by a six-member jury this week.

Keoughan, 27, a member of a local gun rights group, Come and Take It, was stopped by police while surveying the planned route for an upcoming open carry walk in Andrews. Previously, a member of CATI had been arrested by Andrews Police the prior November while open carrying in town. The incident led CATI to open a dialog with local authorities and clear later events with APD Chief Bud Jones.

However, when Keoughan began his walk on Main Street with a shotgun slung over his back and a holstered black powder revolver in accordance with Texas open carry laws, he was soon stopped and, in a shock to him, arrested for “disorderly conduct for displaying a firearm in a manner to cause alarm.”

Jan. 22 arrest video made by Michael Keoughan in Andrews, Texas.

According to media reports at the time of his arrest, Keoughan’s walk attracted a number of phone calls to 911, and caused a nearby middle school put on lock-down.

“We didn’t know who he was, had no clue but we started getting a mass number of phone calls,” Chief Jones said in January. “By displaying the weapon, he caused undue alarm.”

Part of the reason Keoughan’s arrest came as such a shock to the group was that they believed they had “assurances” from Jones that something like this would not occur again. However, Jones believed that their “assurances” were more of a miscommunication.

“If an individual on his own wants to do that, he, out of the common courtesy, should contact us. That’s what I told them,” Jones said.

Nevertheless, a six-member jury in Andrews County Court did not feel there was enough cause to convict the open carry advocate in his Sept. 4 trial. The court heard testimony from witnesses called by the prosecutor who saw Keoughan walking through town with firearms, as well as 911 calls made to the police department. In the end jurors concluded he did not meet the definition of the crime he was charged with.

The crime, a Class B misdemeanor, carried with it a fine of up to $2,000 or up to 180 days in jail, or both had Keoughan been found guilty.

“We wrestled with it quite a bit, I think the hard part was it wasn’t about second amendment, it wasn’t about open carry, it was about figuring out exactly how it fit into disorderly conduct,” Head Juror Leslie Boone told CBS7.

Keoughan, who was able to reclaim his firearms following the trial, felt vindicated.

“I feel like justice was done today, I did nothing wrong that day and today we can see that,” said Keoughan.