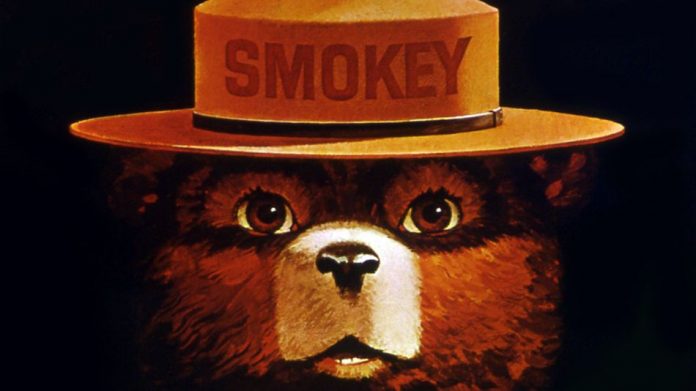 While dining at El Sombrero this evening I was surprised to see a Public Service Announcement on the TV displaying the character Smokey the Bear with the caption: “Only You Can Prevent Forest Fires”.  I recall the impact that ad had on me as a child in my long-past and misspent youth.  The PSA startled me because El Sombrero is 900 miles south of the Texas border.  I wasn’t expecting to see him here.  The shock piqued my inner adman.

It struck me that that message could be reframed as “Only You Can Prevent Gun Fire”.  This statement could overlay any of the many heroic civilians who have stopped shooters in public places.  Or, perhaps, a series of pictures of the latest civilians who have performed such public service.

What’s the effective idea here?  Is it really a binary proposition?  It is only the individual hiker or camper who can prevent a wildfire. It is not Forest Service smoke jumpers who parachute into the sound of crackling timber to fight fires in process.

In reality, with most problems of social concern, it is a combination of effort by professionals and lay(wo)men alike.  In obstetrics, it’s the professional doctor or midwife who ensures the safest possible delivery.  But the patient has as much as 9 months to line up these professional resources.  With home fires, it’s the builder who bears initial responsibility for constructing the home to code.  The homeowner maintains the premises as free of combustibles as possible and keeps fire extinguishers ready to use.  Professional firefighters rush to the report of a 911 call.

Then what of assaults by firearms?

Public shootings are least like the obstetrics example.  We don’t get months of notice that an attack is pending.  We can’t really speak of “preventing” a public shooting in the same way as we can prevent a crisis in labor and delivery through proper prenatal care and case management on the delivery date.  Professional public servants really can’t do much to prevent public shootings.  Failure to recognize this simple fact is to divert our attention from effective mitigation.

We can look at public shootings from an analogy of emergency rooms and ambulance services.  The emergency occurs.  The ambulance is summoned and mitigates the damage as best they can on the street.  Then the professionals in the ER do the best they can to save those who survive the ambulance ride.  It’s the best they can do.  Police can’t really do any better.  Sometimes they can be pre-positioned for scheduled public events.  But ambulances and ER doctors can’t be everywhere at once.

Perhaps the best example is that of the home fire.  Builders can implement some preventative measures ubiquitously.  Still, homeowners must maintain their premises as fire safe as possible.  We keep and replenish fire extinguishers.  It is us, the (civilian) homeowners who are “first responders” when fire breaks out, before professionals can reach the scene.

We have the data.  Each gunshot homicide is investigated and documented in great detail.  We understand the problem very well.  What works?  A good guy in blue who rushes to the sound of gunfire?  Or the good-guy—irrespective of the color of his profession—who is already at the scene?  How many must die as a consequence of our fetish for professional responders? When those professionals cannot reach the scene in seconds? Or when, upon arrival, fail to run to the sound of gunfire?

Only you, the good guy at the scene, can prevent gunfire.

— ‘MarkPA’  is trained in economics, and is a life-long gun owner, NRA Instructor and Massad Ayoob graduate. He is inspired by our inalienable rights to “life, liberty and the pursuit of happiness” and holds that having the means to defend oneself and one’s community is vital to securing them.