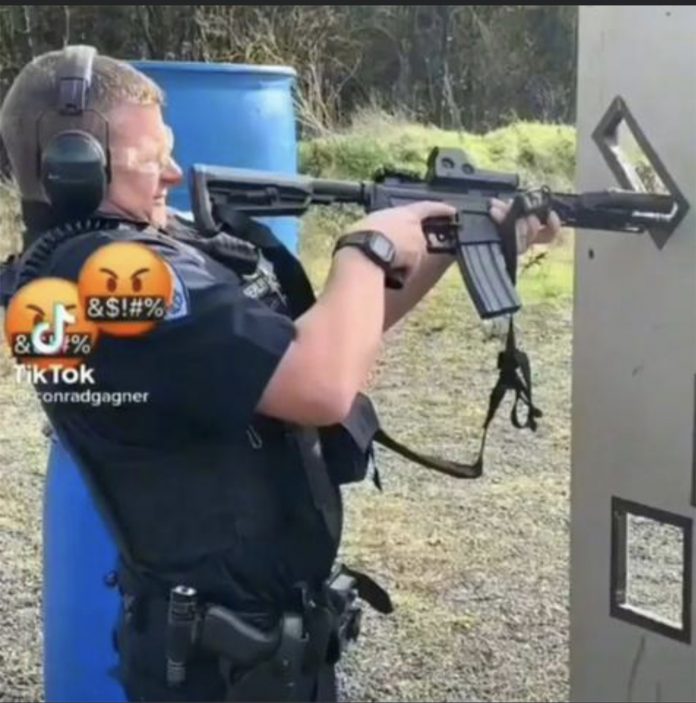 It’s an old… tired… and terrible argument. See the above example.

A. If we are trying to tie competency to ownership for safety we should really, and I do mean really, take a look at cars first. Vehicle accidents and a demonstrated driving standard (and maintained standard) could further curb deaths and injuries.

B. This argument/opinion was extensively used by the prosecution in the Kyle Rittenhouse trial. It is the obvious opinion of the prosecutor, Binger, who said “You lose the right to self–defense when you‘re the one who brought the gun,” which becomes problematic for police officers.

“You lose the right to self–defense when you‘re the one who brought the gun,”

So, what about the cops?

What about law enforcement?

We can prove that their firearm competency, both in use and in practical and technical knowledge, is something of a nebulous standard. It varies widely from officer to officer. Look up any LEO firearm qualification for patrol officers and they’re usually very very easy to train to that standard. Officers who are still on the road routinely fail these simple qualifications and have to retest.

If you can’t pass a test cold (without practice and ‘warming up’) then you cannot be expected to perform at that level on demand. There is no warmup in a sudden or unexpected confrontation that goes to guns. Cold tests produce authentic results.

Why are those officers still on the road? Why are those who cannot perform to an on demand emergency standard

Simple. Departments can’t afford to bench them. Period. The other non-critical and non-emergency services they provide by being something between a warm uniformed body and a source for general information, or non-critical and non-threatening control (event traffic, parade, school function, community outreach, so on, so forth, etc.) are more likely uses of any qualified or unqualified officers time than an emergency is.

But, in the grand calculous, using these under prepared officers pays off for routine functions, and the more times a seriously negative outcome does not occur (even though the situation made the chances high) the more it becomes okay that higher risk officers who are under prepared mentally and physically for emergencies stay on for the day-to-day.

The Act of Aggression

There are two very prominent shooting cases in court right now, Rittenhouse’s and the McMichael’s. They have surface similarities and both defendants are claiming self defense, however both incidents have video evidence showing the moments of contact and moments prior.

The two situations are very different from the ‘aggressor’ stand point. Both defendants in both cases are claiming that when the deceased reached for their weapon to take it, they felt their life was in danger.

That statement, in a vacuum, is reasonable. Someone without consent in a confrontation is attempting to take your weapon, your life is at risk under those circumstances. That is a reasonable point of view.

What separates the two is the prior immediate circumstances. In the McMichaels case of pursuing Ahmed Aubrey, they were the first lethal threat. They escalated to lethal first, as being pursued by armed men in a vehicle who have no legal authority to stop you would reasonably make you fear for your life. Add to that the fact that he is a lone young black man in Georgia being pursued by three armed white men in pickups.

Poor decisions were made. The McMichaels and their friend/neighbor took on an extrajudicial authority that was not theirs to take in a likely emotive reaction to prior thefts and reports read online. This is basically how to go to prison as a dumb vigilante 101.

How was Rittenhouse different?

Granted, there would be no reasonable way to know that Rosenbaum, and Huber, who would both have been illegally in possession of the AR-15, were prohibited possessors and the law would make exception for the exigent circumstance that a felon, in fear their life, would take actions including disarming and individual.

But possession of a firearm is not an implicit threat from one person to another, see law enforcement and armed security. Self defense law further sustains (and this was used against Rittenhouse) that when a threat ends it is no longer permissible to engage in lethal force defense. Rosenbaum making Rittenhouse run off may have qualified, Rosenbaum pursuing Rittenhouse is much more suspect. Rosenbaum’s other behavior during the day continue to support the fact that a fear of Rosenbaum killing Rittenhouse would have been reasonable, but the mere fact that one adult can kill or seriously injure another with their bare hands and Rosenbaum’s actions certainly indicated that likely.

So, you can’t have it both ways. You cannot have a nebulous standard of what a threat looks like. You cannot have it so that the presence of a firearm is an implied threat when brandishing and menacing laws cover the overt act. If Rittenhouse bringing a firearm was a threat, then law enforcement or security bring firearms is a threat.

Instead the standard is overtly indicating use, brandishing. If Rittenhouse had deliberately aimed in at anyone without a probably threat to himself, he would be brandishing and he would be the aggressor.

This is being used in the McMichael case by the defense as the younger McMichael served in the Coast Guard and had some training in this regard. Where this falls apart is that, in that capacity under the Coast Guard McMichael had LE and Arrest authority backing the threatened use of force with the firearm. When he and his father pursued Aubrey they had no such backing authority, nor would there be any reasonable expectation on Aubrey’s part that they have that authority.

There’s thoughts of the day while we watch these two trials involving contentious events and self defense claims continue.

And the idea that only our variably knowledgeable officers, with a wide range of proficiencies, and a documented history of errors, should be armed instead of the general public because they are so much better and safer at being armed?