Nothing like jumping into the deep end for your first run of knives.

That’s what Kyle Ver Steeg did for the first knife from his new custom knife company, Ver Steeg blades. He could have done a drop point necker or a bushcraft knife–simple forms with many variants, but instead he chose to emulate one of the more famous knives as his first offering: the Bowie knife.

Long a well loved fighter and perhaps the quintessential American fixed blade, many, many custom makers produce a Bowie. The Bowie has become something of a right of passage–you have to make one to be taken seriously. So to make one on your first go-round is pretty remarkable. But this is no ordinary Bowie. First, it is a variant based on the fighting knife issued to island hopping Marines in World War II. They needed something that could fight like the original, but also was thick and sturdy enough to be used as a camp knife and a chopper. Out of these requirements came the Marine Raider design.

Kyle has an excellent YouTube channel and his adventures, ranging from providing aid to folks in the Philippines to trips to Sturgis for Bike Week, are really inspiring. He has taken trips deep into the Amazon and along the way he picked up a lot of good feedback on how to make a knife. He also happens to know something about the hand, as he does hand surgery.

Kyle took some liberties with the form as he recognized that folks aren’t likely to do a whole lot of hand to hand fighting. First, he changed it from a stick tang to a full tang blade. He also dropped the double guard or quillion in favor of a single, forged-in guard. The overall shape is very stout looking with a massive slab of steel and a distinct belly.

The blade steel is a tried and true high carbon steel called 52100, which is often used in the construction of high durability ball bearings. The grind is a convex grind, which is renowned for its durability. The handles are heavily rounded and contoured and fixed on the knife with both bolts and epoxy.

Kyle’s focus on handle design produced something that looks very comfortable but distinctly different from the original Marine Raider Bowie handle. There is probably a bit of Ethan Becker and a bit of Mike Stewart in there, but there is a lot of his own take on handle design. Given his day job he knows quite a bit about what a handle should look and feel like. The entire package is rounded out with a truly superb ambidextrous leather sheath from Armor All Leather. There were only 15 made but they weren’t terribly expensive for what you get, coming in at around $300. I would imagine given their quality and low numbers they will go for more on the secondary market.

Its probably too late to find a Ver Steeg Marine Raider Bowie, but as a first offering this is pretty darn impressive. If you are a fan of fixed blades, I would imagine it would be beneficial to stay tuned to his Facebook page. Let’s hope he’s decided he wants to make a small fixed blade for EDC use. 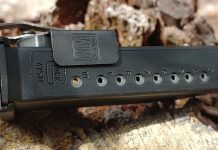 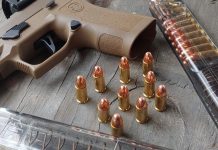