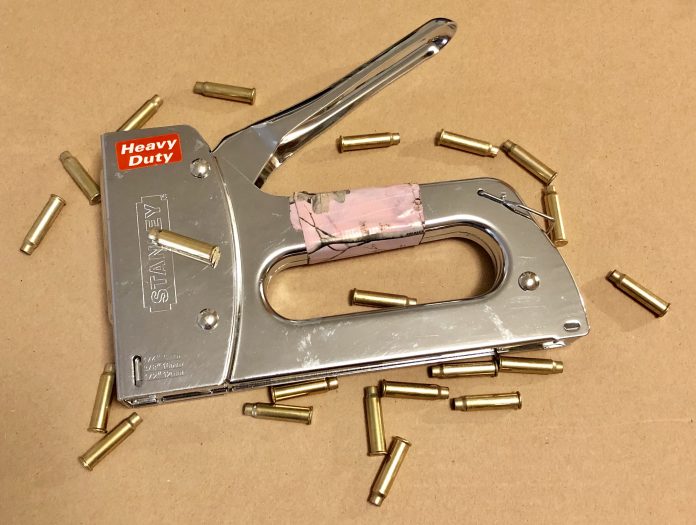 Have you ever had “one of those days” on the range?

That was me a few weekends ago. I loaded up the car on a sunny Saturday and drove to my gun club range to sight-in a new rimfire rifle and scope. But almost from the moment I got there, it seemed like anything that could go wrong, did. Nothing safety or injury-wise thank goodness, but just the a huge cluster of frustrations.

It all started when I went to set up a target stand. The stapler at the range was empty. So I moved to Plan B and grabbed my own stapler from my target bag. Also empty – durn it! Somehow my box of refill staples had not made it into the bag, either. *Grrrrr*

(This brings back a memory of a coworker who once complained bitterly about people leaving the lab stapler empty. I pointed out to him that this was a useless complaint. How would one know that one had used the last staple unless one tried to use it again, at which point one would come up empty and then refill the staples?)

So I tried Plan C – which was to try to stick the target to the uprights using extra stick-on targets as if they were tape. But they weren’t sticky enough and the day was too breezy.

Plan D was to search my car and the range building to see if there were any other options – like the duct tape I usually keep in my car – which was also gone.

I finally scrounged up a few random pieces of extra staples that were on a shelf in the building. It wasn’t an entire bar of refills – just twosies and threesies that no one else has wanted to bother with. But it was enough to get my target stapled so I could move on. (I’ve since bought a new box of staples, and I need to run back over to the club and leave some for the next poor schlub in my position.)

Although the morning was sunny, the grass on the range was not well-drained. It was sloppy and mushy due to the previous week’s rain and melting snow. I had not worn my muck boots, but rather a pair of hiking boots that had previously failed me in the supposedly “waterproof” department. Big surprise – they failed again. My socks started feeling soggy on my first trip downrange to place the target stand. At least they were wool socks, so my feet stayed warm.

When I returned to the bench to get ready to sight in, I discovered a pro tip:

If your boots are wet from the sloppy range, don’t forget about that and then try to raise your seated height by sitting on your foot. My cotton jeans did not stay warm when wet. Just sayin’.

After I got my wet behind settled down to sight-in my new rimfire rifle – it failed to extract. At least I had remembered my pocket knife. I flipped the spent brass out with the tip of my knife, and hoping maybe this was just the new gun getting broken in, I tried to proceed with the sight-in. It ejected the next couple rounds and then stopped extracting again – this time for good. The rifle was shooting accurately, but even trying different ammo didn’t help – I needed to knife-extract every round. *sigh*

To top it off, the day was breezy and occasionally made the target paper flap, until one gust of wind tipped the whole target stand over backwards, spilling it into the slop.

I took the hint.

I went home, threw the boots in the garbage, and took a nap.