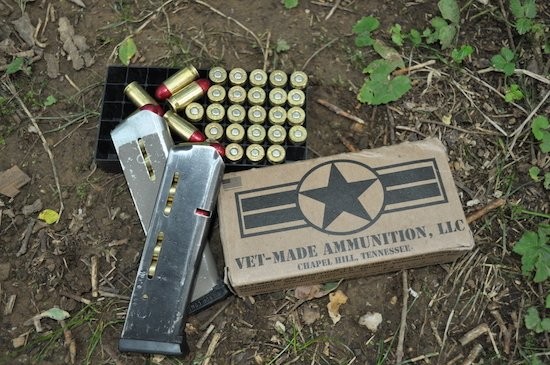 You might recall us recently telling you about a small ammunition company down Tennessee way. Well, one of our minions got some of their ammo and decided to see what Vet-Made Ammo how he’d like it. “Vet-Made Ammunition” sound just about perfect for the gun of an American Jedi, but we wanted to be sure. Mad Duo

On the range with Vet-Made Ammunition, LLC

I’m not sure if you guys know this or not, but unless you’re Stephen King, you probably won’t get rich from writing. As a writer I can vouch for this truth, and am constantly on the lookout to save a buck. Since ammo became more scarce and expensive in recent years, shooters have had to hunt for bargains more than ever before.

So I was intrigued to try out some .45 ACP ammo sent to me by Vet-Made Ammunition LLC, a company focused on helping military veterans get back on their feet through fulfilling, meaningful work. An added benefit is that they make some damn fine ammo at an extremely reasonable price. This is the kind of company I like to support, and I’m happy to report that you will very likely feel the same way.

The company set out to create ammunition that won’t break the bank to shoot, but will also shoot well for both recreation as well as competition. I’m not much of a competition shooter, but I occasionally shoot an informal three gun match a nearby gun club hosts. I figured a good way to test this ammo would be to shoot a little bit of recreation plus the three-gun. The ammo’s accuracy would show on the range, and its reliability would show in the fast  paced shooting of the three gun competition. With both 230 grain and 185 grain FMJ rounds to test, I figured I would shoot both in the two different settings. 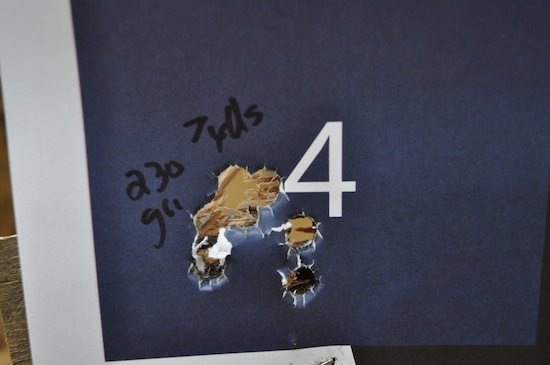 Shooting slow, and focusing on accuracy, I performed all my informal testing unsupported and from the standing position. Personally I have never understood why some dudes accuracy test with a ransom rest, or from sandbagging their guns into place like a Normandy beach howitzer. How does that replicate how your system will perform in real life? If a pistol has proven itself reliable with a wide array of ammo in the past, and you know your capabilities as a shooter, I really don’t understand this form of testing, so I don’t do it. I like to start with a dirty, disgustingly fouled handgun, and go from there. 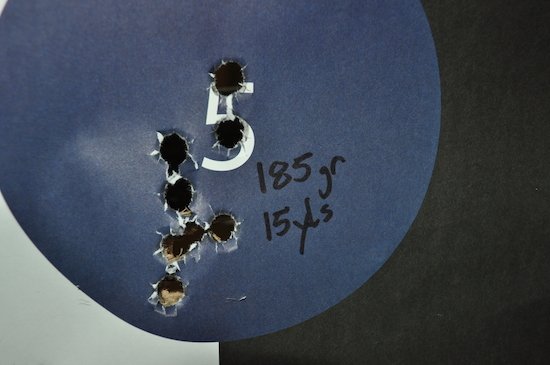 For the purpose of this review, I picked my custom 1911 which has had thousands of rounds put through it over the last few years, and hasn’t seen a good scrubbing in several hundred rounds. On the range I started out at 7 yards, and shot a magazine of 8 rounds slow fire, focusing on the fundamentals. Next, I did the same with the 185 grain, with no apparent change in accuracy of point of aim / point of impact shift. This is my usual warm up anyway, and I was pleased with my tight shot group on the first mag which measured only about two inches across (plus one flyer). I consider this pretty close to my own personal standard. 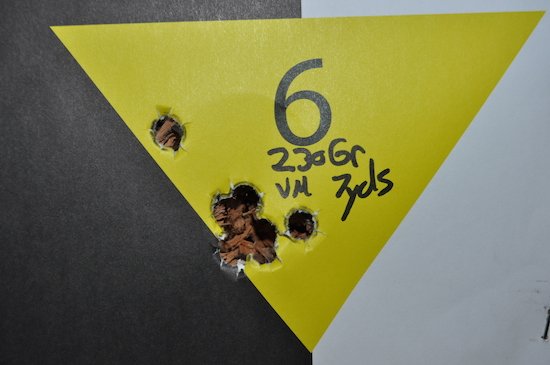 Obviously this drill isn’t a fair representation of the ammo’s performance, so I proceeded to push out to 15 yards. Obviously the shot group opened, but all rounds stayed center mass. Firing both types of projectiles, I moved onto the 25 yrs line. I kept all rounds center mass and once again felt confident with the results. At this point I moved to shooting steel at 50 yards. Shooting a reduced size human silhouette, I managed to keep 6 of my 8 rounds on target with the the 230 grain, and surprisingly shot 8 for 8 with the 185 grain loading.

The flatter trajectory of the lighter projectile at this distance might have made the difference, as I had observed my two misses from the previous magazine splash just below the bottom edge of the steel. I returned to the 7 and 15 yard lines to do some different drills, and wrapped it up for the day. I had enough ammunition for my evaluation to repeat these drills, and practice a bit more before the upcoming match.

Finally the day arrived, and I woke up early to head to the range. The match usually has you shoot anywhere from 100 to 200 rounds of pistol ammo, and I brought enough to shoot with my buddy, a fellow 1911 fan. The ammunition performed as well as any other quality factory ammo I have shot over the span of my life, and we were both pleased to hear more “Down Zero” calls than the alternatives. The ammunition shot well in both of our tuned 1911’s. Neither of these 1911-type pistols are fussy in regard to ammo, but neither of them had been cleaned since “shooting season” began, either.

I didn’t take first place in the match, but then again I never do (it’s the Indian, not the arrow!). This has nothing to do with the performance of the Vet-Made ammo, aside from it being full power loads. I refuse to shoot down-loaded mouse fart “match” rounds, as many competitors do. I feel that shooting hundreds or thousands of reduced power rounds a year out of a pistol you carry for defense is doing yourself a disservice. But thats just one dude’s opinion. 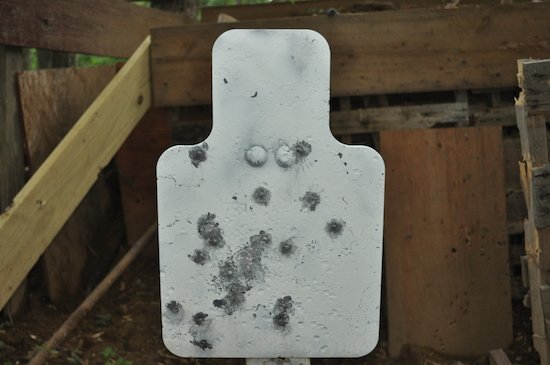 All and All, I’d place this ammo next to any of the big brands out there. It shot well for my needs, and it was consistent which is my only requirement aside from reliably. I think that just about anyone would be well served shooting this ammunition for training, practice or competition, and won’t go broke doing so. The company loads for a variety of popular calibers, and I hope in the future to review some of their rifle ammo. I have the feeling it will do as well as their .45 ACP! For more information on the company and how to order, Check out their website here. You can get some great ammo, while helping to support a small American business staffed by disabled American Jedi. Thats a win-win in my book!