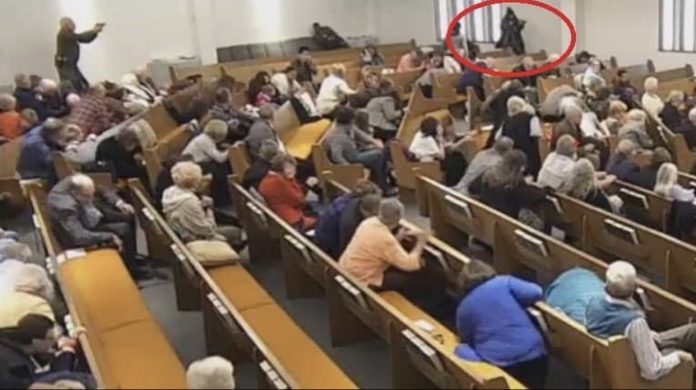 Over the weekend we had two highly publicized examples of targeted violence, both seemingly of anti-religious sentiments. At the very least both events targeted a religious gathering. One unfortunately illustrated vulnerability, while the other preparedness.

The title image is a still taken from the video live stream in Texas of the church service attack. It shows the moment that an attendee, Jack Wilson, one of several in the congregation who was carrying since Texas passed the law allowing carry in church, engaged and killed the gunman who pulled a shotgun and open fired.

Law Enforcement is not releasing details yet on who the gunman is but is being termed as having “ties to the area, but transient”. It is unknown if the motive was hostile to the church itself, faith in general, or something else entirely. 240 people were in the congregation when the man pulled the shotgun. Two people were killed on account of his actions. One man died at the scene and another enroute to the hospital.

The video is below. Warning: It is graphic.

The congregates, many who were part of a volunteer security team, had a plan and enacted it. They stopped the shooting in six seconds.

But despite the horror of the attack, imagine it unopposed. Imagine if state law had still prohibited church goers from taking steps to protect themselves, and those 240 people were left to the whims of a violent man with a shotgun. Those watching live through the stream would have had a front row view of an even greater horror show than the brief gun battle above.

Compare that scene to the fear within the Jewish community in New York were a string of violent anti-semitic attacks was put into sharp focus with a mass stabbing home invasion that severely injured 5.

A Rabbi’s home in Monsey, New York was violently invaded by Grafton Thomas (seen in custody below) where he stabbed five people celebrating Hanukkah, the house held around 100 at the time. Thomas then fled and was arrested covered in blood after a traffic camera pinged his license plate.

This, so shortly after the Jersey City shootout, has put the Jewish community, especially those around New York in a heightened state of fear and awareness.

The mayors and governors can stand up in their press conferences and bloviate on their commitment to the safety of the community all they want, but their policies actively suppress the rights of individuals to defend themselves if attacked. The government keeps promising and individuals keep getting assailed.

Now Thomas, the home invader in Monsey, does not appear to have an active anti-semitic connection at present, unlike Jersey City. But in the end does that matter? As a community that feels under threat does the fact Thomas wasn’t targeting the gathering because it was a Hanukkah celebration matter?

No. Motive never matters in the moment. Reaction does. Those five people were stabbed in the safety of their Rabbi’s home, their home, and it doesn’t much matter if the motive was anti-semitically driven or not to the injured. It has implications in the larger picture for future policing, but not in the moment.

The community is now calling for more safety, more policing, more measures to protect them from hate, violence, and crime. The state of New York is further and making a show of calling these terrorist acts? Governor Cuomo, what does ‘calling it terrorism’ (when it is, like Jersey City) or when its unknown (like in Monsey) have to do with empowering your citizens to safety? Does naming it something different allow your police force to be more places?

The gathering in New York I am certain did what they could, the fact that only 5 were injured may be a testament to forcing Thomas bodily from the premises. He also may have left of his own volition, whether seeing so many gathered changed his mind, he had done the damage he meant too, or any other whim swung his judgement is not known.

But the reaction from the community shows they firmly believe this is the government’s job to solve… and they will be disappointed.

In Texas, an attack with a weapon arguably far more lethal, the attacker was not given the latitude to choose. He was met with force, effectively and swiftly, and put down.

Now which gathering, should the worst occur, would you rather be in? The one empowered for their defense, or the one government keeps promising to do better by?