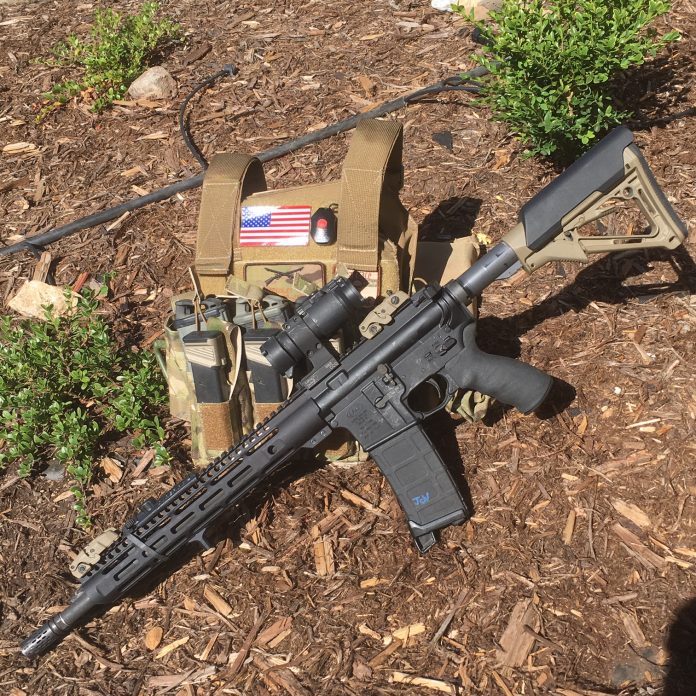 Hello all, it’s your main man Jase, and I am back with another piece of writing to entertain your Covid brains with… if you want to. Today I’d like to tell y’all about one of my sponsors, Midwest Industries.

Who are Midwest Industries, what do they do?

For those of you who don’t know, Midwest Industries is an American firearms and parts manufacturer located in Wisconsin. They manufacture parts for everything from your standard AR-15 down to your trusty Lever Action or your old faithful Ruger 10-22  We’ll get more into that juicy stuff in a bit.

Midwest Industries was established in 2003 with the goal of making high quality American Made products at an affordable price. I was fortunate enough to meet Mr. Troy Storch (Midwest Industries President/ CEO) and some of his staff during SHOT Show 2019. Having Sponsors is cool, but having Sponsors who you have met in person and had an actual conversation with is so much cooler.

Thankfully the entire MI crew are awesome people. Not only did I have a great chance to meet with them but also got some personal time to learn a bit more about the MI line of products. I look forward to crossing paths in person with everyone from the MI crew again.

My MI Experience and Rifle:

A little while after I first got into competition shooting I was put in touch with the fine folks at Midwest Industries as a potential rifle sponsor. I’m very grateful my friend Steve Fisher of Sentinel Concepts made the introduction.

Three years and roughly 16,000 rounds later, my rifle and my respect for MI are more solidified than ever. My rifle is a MI-FLW18CRM17XR (unfortunately not listed, but the one linked just sports a slightly shorter handguard). It has an 18” barrel chambered in .223 Wylde. It’s got a 17.5in MLOK rail (MI-CRM17XR) which is actually my favorite thing about the rifle. The 17.5in rail has a V-cut on the sides to allow the muzzle brake to do its job while also giving you a full length rail system. This not only is aesthetically pleasing, but is also beneficial while running competitions due to the security I feel when throwing my gun into the dump barrel.

Aside from my rail, the greatest thing about the MI rifle is that it just plain runs. It runs fast, it runs smoothly and it runs accurately.  I’ve only ever had one issue with this rifle. A few years ago I had a gassing problem with my rifle (to no fault of MI, it was an ‘at home armorer’ issue. My bad!).

Not only did they fix my gas block, but their armorers also gave my rifle a full tune up, to include an improved set of back up iron sights and a replacement of all parts that could have been worn at that current round count.

Best of all, and something I think speaks volumes about their Customer Service, is that the total turnaround time felt non-existent. With my competition gun down for maintenance, I only had to use my Training rifle for one 3-Gun match.  Out the door and back home in less than 10 days… the fine folks at MI take care of you, making it a priority and that makes for happy customers. That was the one and only issue my MI rifle has ever had.

She’s a Franken Gun built with parts from a lot of top notch firearms/ component companies (this article isn’t about them so they will remain unnamed) and a Midwest Industries (MI-SLH12.625) Rail. For 3-Gun and Multigun I train with my Competition rifle, but my travel/ training gun is different.

This gun has seen training with Steve Fisher, Dan Brokos, Jared Reston, Chuck Pressburg and Bill Blowers amongst others… It’s travelled from WA to San Diego, CA to FOP in Alliance, OH, all the way to The Ranch in Eagle Lake, TX.  If I’m taking a class on tactical shooting fundamentals or advance firearms work, the Franken Gun is my go to because I’m not trying to beat the hell out of my Competition rifle.

To this day my Midwest Competition rifle is still the most accurate AR platform in my safe. The only thing that I changed to the parts was a Geiselle SSA-E trigger, and I think that upgrade explains itself. Throw on a Vortex Viper PST GenII, a Radian Raptor Charging handle and an Arisaka fingerstop you have yourself a rifle worth competing with. Maybe add a Lead Faucet Tactical sling from time to time when stages get extra funky.

Now let’s talk about lever action rifles. You may be envisioning that classic look of sleek metal and wood furniture with a leather sling hanging off a cowboy’s shoulder. Just a man and his gun ready to take on the world.

While that is one depiction, and certainly not a bad one, there is another picture I’d like to paint. The modern cowboy who still has his trusty lever action, but now has an Aimpoint on it, and an MLOK rail, maybe a light and a hand stop, as well as a sturdy 2-point adjustable sling. The modern cowboy with his modern Lever Gun. What a great mental image, right?

Well that picture can become reality with Midwest Industries Lever Gun upgrades. Turn your Henry or your Marlin from a classic yet plain old lever gun into a badass modern day lever action blaster that your friends and family can drool over. MLOK handguards, top rails, and optic mounts to give it a truly functional and modern piece.

Maybe you’re less about the cowboys and more about the modern sub gun life… Midwest has that too. Whether you’ve got a Ruger PC-9, or a CZ Scorpion, or maybe even a Kel Tec sub-2000, Midwest has the PCC parts for you. Obviously cool points count when you are modifying a rifle, but practical cool points count much more.  Taking the capabilities of the PCC platform and having the ability to change its form and function via Midwest Industries upgrades is a mighty cool thing.

And while we are on the topic of cool upgrades for the blasters in your collection, let’s not forget about the American gun owner’s staple, the Ruger 10-22.  Midwest Industries has taken a classic and given shooters the ability to upgrade it with everything from dedicated optic mounts to MLOK rails and even a new chassis.  Best of all these upgrades are available for both standard rifles and the Ruger 10-22 TakeDown.

So why should you buy Midwest Industries?

Covid-19 has given many Americans lots of free time (and stimulus checks). My dad and I spent a bunch of it dumpster diving in our parts bins and building out guns and I’m sure many of you readers did as well.

Personally I wouldn’t mind picking up an MI-PC9PKG12 for a Ruger PC-9 or even an MI-MARMR for a Marlin Lever Gun in the near future. And of course some MI-CRLW-15’s for the Covid builds.

Their customer service is above excellent, and the people at MI are just solid humans. Having Midwest Industries as a sponsor has been awesome. As a shooter, I have been more than happy with MI firearms/ parts/ customer service, and I think you as proud American gun owners will be too!